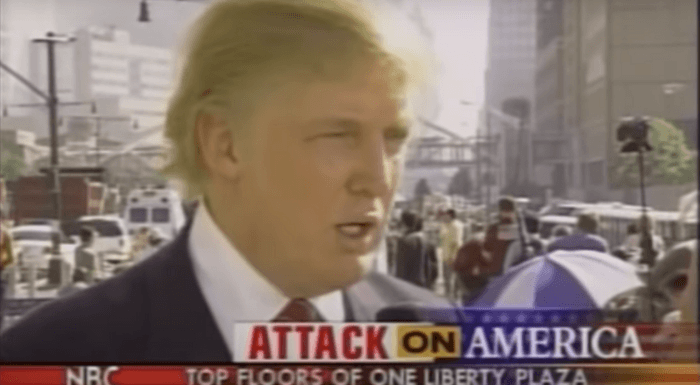 President Donald Trump puts “America First” because he loves the country he leads.

This can perhaps be remembered best by what the future president said on the day of the 9/11 terrorist attack in 2001, and the days that followed.

During the carnage and chaos of that terrible day 19 years ago, millions of Americans stepped up. People from all over the country did what they could to support the brave people of New York City.

“We have over 100 and we have about 125 coming,” Trump informed a German news outlet during an interview, referring to Trump Organization workers assisting their fellow New Yorkers. “So we’ll have a couple hundred people down here.”

“And they are very brave and what they’re doing is amazing,” Trump told the reporter. “And we will be involved in some form in helping to reconstruct.”

During the interview with the German news outlet, Trump commented, “I’ve never seen anything like it — the devastation, the human life that’s been just wasted for no reason whatsoever. It is a terrible scene. It’s a terrible sight. But New Yorkers are very strong and resilient, and they’ll rebuild quickly.”

Later that day, Mr. Trump made similar comments during an NBC interview.

RELATED: Kayleigh McEnany Says ‘I Want My Daughter to Grow Up In Donald J. Trump’s America’

Trump Recounts What He Saw That Morning

ABC reports that Trump gave a harrowing recollection of what he saw the morning that America changed forever.

“I was sitting at home watching a major business television show early that morning. Jack Welch, the legendary head of General Electric, was about to be interviewed when all of the sudden they cut away. At first there were different reports. ‘It was a boiler fire.’ But I knew that boilers aren’t at the top of a building. ‘It was a kitchen explosion in Windows of the World.’ Nobody really knew what happened. There was great confusion.”

Trump said, “I was looking out from a building in midtown Manhattan directly at the World Trade Center when I saw a second plane, at a tremendous speed, go into the second tower.”

“Soon after, I went down to ground zero with men who worked for me to try to help in any little way that we could. We were not alone. So many others were scattered around trying to do the same, they were all trying to help.”

Long before President @realDonaldTrump ever thought of running for @POTUS, immediately after the attacks on #America he was down at #GroundZero supporting the troops and dispatching #Trump employees to assist in any way they could. #Patriot pic.twitter.com/BthGMef7xQ

On the day of the attacks, local TV station WWOR called Trump: “I have a window that looks directly at the World Trade Center, and I saw this huge explosion,” Trump said. “Now, I’m looking at absolutely nothing. It’s just gone. It’s just hard to believe,” Trump said.

“This country is different today,” Trump told WWOR, “and it’s going to be different than it ever was for many years to come. …I guess the big thing you really will have to do is never forget.”

Trump Showed His True Colors – For His City And His Country

During his 2016 presidential campaign, Trump told a crowd at a rally in Buffalo, New York, “Everyone who helped clear the rubble—and I was there, and I watched, and I helped a little bit—but I want to tell you: Those people were amazing.”

Trump continued, “Clearing the rubble. Trying to find additional lives. You didn’t know what was going to come down on all of us—and they handled it.”

Just this year, President Trump also allocated $ 2 million to the 9/11 Memorial through the National Park Service.

I am proud to announce $ 2 million for the @Sept11Memorial in NYC! This special site ensures that the memory of the nearly 3,000 people killed in the terror attacks of September 11, 2001, as well as those lost in the World Trade Center bombing in 1993, will never be forgotten!

9/11 was the greatest attack on civilians on American soil in United States history. It is a day we will truly never forget.

Neither will Donald Trump. Then or now.

RELATED: Niece Of Osama Bin Laden Says President Trump Is Only Person Who Can Prevent Another 9/11

German schools, reopened a month ago, have seen no major coronavirus outbreaks

Sufferer of long-Covid describes one of its most debilitating symptoms

Match shares soar on news it will join S&P 500

Covid US: Black patients would have survived if they went to same hospitals as white…

The most popular drugs taken by cheaters in the Olympic Games

No winner has been declared in the 2020 U.S. election. What happens now?

What Does Hospital Price Transparency Mean for You?