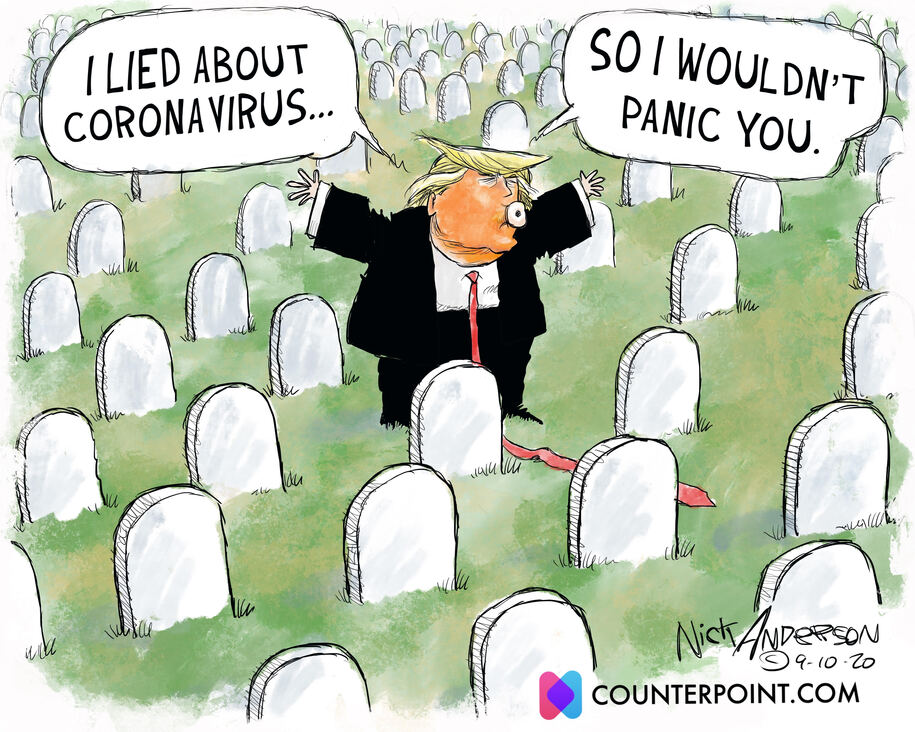 The health department’s Trump-appointed communications aides have demanded the right to review and seek changes to the CDC’s weekly scientific reports on coronavirus, in what officials characterized as an attempt to intimidate the authors. https://t.co/wC9Ghl36GM via @ddiamond

The above is an outrage.

This is a real comment from Caputo, defending his and others politically motivated interference:

“Our intention is to make sure that evidence, science-based data drives policy through this pandemic—not ulterior deep state motives in the bowels of CDC,” he said. https://t.co/oT1v4OZ204

they aren’t just dumb on the science, they’re tone deaf on the politics

“Privately, they welcomed the fight, believing it underscored a campaign theme: Trump’s insistence that the nation has turned the corner on the pandemic”https://t.co/aBQYlVbW6x

Donald Trump has fallen further behind Joe Biden following bombshell reports that the president knowingly misled Americans about the dangers of COVID-19 and privately disparaged dead U.S. soldiers as “suckers” and “losers,” according to a new Yahoo News/YouGov poll.

The survey, which was conducted from Sept. 9 to 11, shows Biden leading Trump by 10 percentage points among registered voters, 49 percent to 39 percent. The previous Yahoo News/YouGov poll found Biden ahead by just 6 points immediately after the Republican National Convention.

The results suggest that a week of unrelenting and unflattering revelations about Trump — from the Atlantic report on his alleged contempt for Americans wounded or killed in war (which appeared on Sept. 3) to Bob Woodward’s recordings of Trump admitting he downplayed the deadliness of COVID-19 (released on Sept. 9) — has damaged the president’s standing with voters.

Asked if their opinion of Trump’s coronavirus response has changed because of Woodward’s big scoop — a tape of Trump privately acknowledging the virus was “deadly stuff” even as he publicly sought, in his own words, “to play it down”— nearly a quarter of Americans (23 percent) say yes. Even 15 percent of those who voted for Trump in 2016 say the Woodward news has changed their mind about the president’s handling of the pandemic.

The military story seems to have had a similar impact. Asked which candidate shows more respect for the military, 50 percent of registered voters name Biden, compared to 39 percent for Trump. By the same margin, voters say Biden would do a better job leading the military than the current commander in chief.

Lots of other tidbits in that poll as well. For example, the poll suggests that the vast majority of Americans don’t see the sudden appearance of a vaccine pre-election as helping Trump:

But the Yahoo News-YouGov poll suggests that even an “October Surprise” vaccine might not save Trump’s reelection bid. Only 16 percent of registered voters think that a vaccine released before Election Day would be safe; 58 percent believe the opposite. Even more of them (62 percent) say that it’s a bad idea for Trump to push health officials to release a vaccine before the election, with just 17 percent saying it’s a good idea.

Sixty percent of voters believe Trump’s motivation is political, more than twice the number (27 percent) who believe he wants a vaccine before Nov. 3 for medical reasons.

So the two October surprises, vaccine and a Durham report, are looking like flops right now.

So when a story breaks that’s bad for Trump, instead of getting in a dumb argument on this website about whether it’ll matter, share it with everyone you know. Maybe it’ll matter, maybe it won’t. You might as well try!

Whatever the political consequence, hearing the President’s cynical interview on tape is a revelation.

This is one of those brutal weeks in the Trump Presidency—and there have been many—when the facts revealed about the President are so painful that it is not just his supporters in the Senate, perennially dodging reporters’ questions on their way to lunch, who might prefer to look away. Among Democrats and the liberal commentariat, there was the usual Woodward bashing: Why had he waited so long to publish this damaging information? But there was also another question: Will any of this new information matter, what with Trump voters so locked into their support of the President that no outrage, no matter how deadly, will sway them? For Trump’s defenders, it was just another time to dodge and deflect. On Fox News, the host Tucker Carlson opened his prime-time show with a long attack on Senator Lindsey Graham, the Presidential confidant whom Carlson blamed for convincing Trump to coöperate with Woodward. Carlson noted that Graham had sat in on the first interview, but did not offer his viewers any explanation for why Trump conducted seventeen subsequent interviews with Woodward.

“Sen. Susan Collins (R-Maine) walked quickly into Thursday’s morning series of votes, flanked by an aide who shielded her from a reporter who yelled a question in her direction about Trump downplaying the threat of coronavirus.” https://t.co/zsAS30bqyL

Coronavirus and Russia: Trump and the GOP’s Double Betrayal

Not since the Civil War have political leaders engaged in such treachery.

Not since the Civil War—when leaders responsible for the enslavement and brutalization of millions of Americans sought to destroy the United States and took military action that resulted in the violent deaths of hundreds of thousands of citizens—has a group of politicians so profoundly betrayed the republic. And this band—Donald Trump and GOP officials—has done so on two fronts simultaneously. They have failed to respond effectively to a pair of immense threats: a pandemic that has claimed the lives of close to 200,000 Americans, and a foreign attack on the political foundation of the country. What exacerbates this double tragedy is that Trump and his Republican supporters have done so purposefully. This has been no accident or act of unintentional incompetence. In each case, they sacrificed the public interest—including the well-being and the lives of millions of Americans—to serve their own interests. Trump and his crew have forsaken the United States of America.

It can be easy to lose sight of this big picture, as headlines explode every hour within a political media world cursed by tribalized partisan divisions. There already exists more than enough information to support such an extreme-sounding verdict. But evidence piles up each day—perhaps coming so fast as to overwhelm.

Far more Democrats than Republicans are requesting mail ballots in key battleground states, including voters who didn’t participate in 2016.

Democrats are amassing an enormous lead in early voting, alarming Republicans who worry they’ll need to orchestrate a huge Election Day turnout during a deadly coronavirus outbreak to answer the surge.

Even more concerning for Republicans, Democrats who didn’t vote in 2016 are requesting 2020 ballots at higher rates than their GOP counterparts. The most striking example is Pennsylvania, where nearly 175,000 Democrats who sat out the last race have requested ballots, more than double the number of Republicans, according to an analysis of voter rolls by the Democratic firm TargetSmart.

I’ve gotten tons of messages “I’m losing fans” by expressing my dissatisfaction with our corrupt, incompetent President. While I appreciate people encouraging me to choose fame and money over decency, I’m afraid I’ll never be Donald Trump.

Is Trump a Russian Agent?: Explaining Terms of Art and Examining the Facts

A number of commentators and critics have labeled President Trump an Agent of the Russian Federation. It is often not clear if they mean that he is unwittingly adopting Russian propaganda, knowingly doing the bidding of the Kremlin or is an out-and-out controlled secret asset of the Russian intelligence services. All are sordid. Some are merely repulsive while others are illegal and even treasonous (in the common though not legal understanding of that term). Even former FBI acting Director Andrew McCabe answered, “I think it’s possible” when asked if President Trump might be an asset of Russian intelligence.

I think it is entirely plausible that Mr. Trump is somehow compromised by his personal and financial dealings with Russia and Russians, but I do not think he is an “agent” in the sense that intelligence professionals use the term. Let me explain.

WaPo with a reminder about the coronavirus:

The energy-dependent state is seeing a faster growth in cases per capita than anywhere else in the U.S.

A recent surge in coronavirus cases is rekindling economic anxieties in North Dakota, where wildly fluctuating oil prices and recent drops in production threaten to leave the state’s finances in fresh disarray.

Six months after it registered its first confirmed infection, roughly 80 percent of North Dakota’s drilling rigs remain offline and thousands of local workers are still out of a job, cutting deeply into the state’s ability to refine oil and mine hundreds of millions of dollars from the natural resources that flow deep within its borders.

For months, low oil prices have contributed to the slowdown, as a global decline in demand made it financially unfeasible for refiners in North Dakota to continue tapping new wells. Another blow came Tuesday: an unexpected 7.6 percent dip in U.S. benchmark prices that sent economic shock waves worldwide.

Interesting: Trump’s military comments “appears to have had a more widespread and quick impact on what Americans are hearing about Trump than any other controversial story about the President that has come to light during this project.”https://t.co/l4ihQe4Mdi pic.twitter.com/d7vNYtpIaL

When Kristen talked over the phone Tuesday afternoon from a suburban Dallas neighborhood, she was in a different wing of her home than her spouse, with the door fastened shut.

“Right now, my husband is downstairs in the study and I’ve locked myself upstairs in my daughter’s bedroom in the opposite corner of the house,” said the mother of four, who was granted partial anonymity in order to speak freely.

Kristen’s caution may seem unorthodox. But to her it just made sense. She was, after all, about to detail her reasons for abandoning Donald Trump, the man she enthusiastically helped secure a landslide victory in Texas nearly four years ago.

There were many reasons why she wanted him out of office, but she didn’t want to start another fight with her husband over it. Especially if it could end up like the one that occurred six weeks ago, where she blocked him on Facebook.

“He was defending Trump on my posts over his own wife,” she said. “I blocked him and he got very angry at me and didn’t talk to me for like five days. My husband is so much like Trump. He’s narcissistic. He’s white. He very much benefits from white supremacy and privilege,” she went on.

“He refuses to read any information that I’ve been reading because he says that he already knows everything.”

When does Serie A start? Schedule, fixtures for Matchday 1 and how to watch

This 3D-Printed Tugboat Is Smaller Than a Human Hair, But It Represents So Much More

Our 5 free and paid Android/iOS apps of the week

“…Until Every Vote Counted”: Biden After Trump Wanted Counting…

Better Breathing With a Harmonica

How to Convert Video to GIF on iPhone & iPad

Don’t worry about Sinema on infrastructure, she’s just a ‘preening…

The CBCF Is Holding Its 50th Annual Legislative Conference In September

September without a new iPhone: in 2020 everything is different