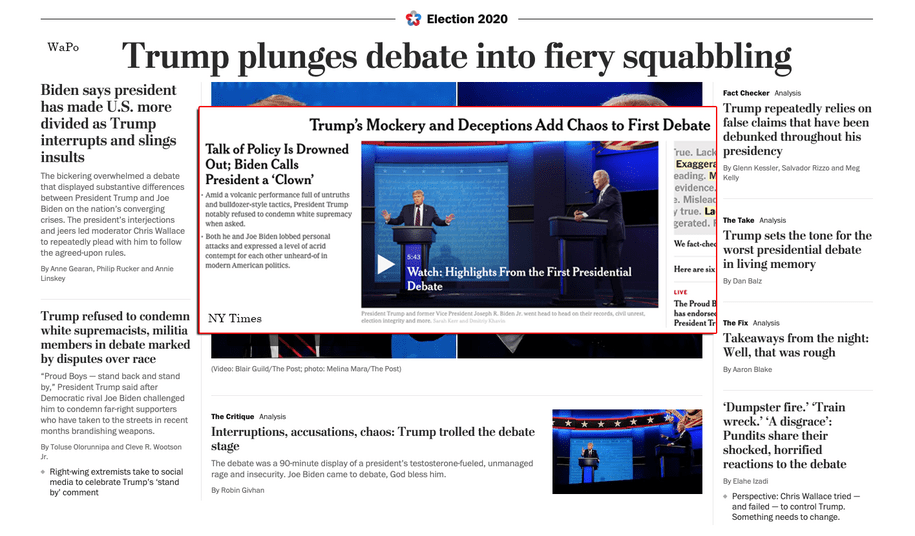 I just don’t think it was a dumpster fire or shit show. It was a frontal assault on our political system.

Bob Woodward called it “assassinating the presidency” this am. And that’s what that was.

Biden campaign thinks calling out Trump for trying to steal the election is counterproductive. Biden instead repeatedly told viewers that their votes would count & that Trump couldn’t stop/change the result. They may be right that it’s more likely to deter turnout than persuade

Trump-Biden presidential debate in Cleveland: Once is enough. Please make it stop.

The Commission on Presidential Debates should cancel the second and third debates scheduled for President Donald Trump and former Vice President Joe Biden. To hold them would be sadistic. Americans don’t deserve this. Biden didn’t deserve it and neither did the moderator, Chris Wallace.

Trump is uncontrollable and cruel and unpatriotic. He made clear in his closing argument that any election he doesn’t win is rigged and fraudulent. His claims had no basis but may have been enough to scare some people off voting in what used to be the world’s exemplary democracy.

We’ll wait on more comment, though the national outlets will have plenty as the day goes on.  We don’t need another debate.

No hyperbole: The incumbent’s behavior this evening is the lowest moment in the history of the presidency since Andrew Johnson’s racist state papers.

Of the more than 9 million voters who requested mail ballots through Monday in Florida, Pennsylvania, North Carolina, Maine and Iowa, the five battleground states where such data is publicly available, 52 percent were Democrats. Twenty-eight percent were Republicans, and 20 percent were unaffiliated…

Even more alarming to some Republicans, Democrats are also returning their ballots at higher rates than GOP voters in two of those states where that information is available: Florida and North Carolina…

The margins are “stunning” — and bad news for Republicans up and down the ballot, said longtime GOP pollster Whit Ayres. While the Republican Party is focused on getting voters out on Election Day, he noted that older voters who have traditionally supported Republicans are most concerned about being infected with the novel coronavirus and could choose to stay home if the outbreak intensifies as the election near

People love it when Trump talks over people and makes insults, it’s why he’s up 7 points in polls.

Solid moment for Biden, who gets an uninterrupted monologue: “He wouldn’t know a suburb unless he took a wrong turn … “

Here’s the thing: the really hardcore Trump supporters don’t understand that he’s losing. They live in a disinfo bubble and have no clue. (I’ve spoken to a couple in person and they think he’ll win like 48 states). Weird situation.

Ok, that was the debate. Trump did a great job of reinforcing his negatives.

Meanwhile, when Frank asks everyone to associate a word or phrase with Biden, the vast majority are positive in nature…. and several people say Biden was much sharper than they expected him to be, exceeded expectations, etc

Terri Mitko is sure there are former supporters of President Donald Trump who aren’t going to be voting for him again, because she lives with one: Her husband.

“There was a whole ‘I don’t want to vote for Hillary’ contingent. And Hillary’s not running this time,” says Mitko, an attorney and chairwoman of the Beaver County Democratic Party. “Trump was a breath of fresh air and had this schtick going about draining the swamp. … Well, now we’re onto him.”

Why did the president knowingly mislead America about the coronavirus threat?

Biden leads by enough to withstand a polling misfire.New Pennsylvania polls give Biden a significant lead.

For the first time since we started our poll tracker several weeks ago, Joe Biden leads by enough to withstand a repeat of the polling error in 2016.

Former aides say that in private, the president has spoken with cynicism and contempt about believers.

The president’s alliance with religious conservatives has long been premised on the contention that he takes them seriously, while Democrats hold them in disdain. In speeches and interviews, Trump routinely lavishes praise on conservative Christians, casting himself as their champion. “My administration will never stop fighting for Americans of faith,” he declared at a rally for evangelicals earlier this year. It’s a message his campaign will seek to amplify in the coming weeks as Republicans work to confirm Amy Coney Barrett—a devout, conservative Catholic—to the Supreme Court.

He has no depth. It’s impossible to come up with any new insights about him. So what happens when politics is crucially important, but there is little original to say? https://t.co/xJf83iNNOH

For decades, the agency stood at the forefront of fighting disease outbreaks. This time, it’s dealing with a crisis of its own.

The CDC had been preparing for decades for this moment — the arrival of a virus rampaging across the planet, inflicting widespread death and suffering.

The agency’s response to the worst public health crisis in a century — the coronavirus pandemic — has been marked by technical blunders and botched messaging. The agency has endured false accusations and interference by Trump administration political appointees. Worst of all, the CDC has experienced a loss of institutional credibility at a time when the nation desperately needs to know whom to trust.

This harsh assessment does not come from political or ideological enemies of the CDC. It comes from the agency’s friends and supporters — and even from some of the professionals within the agency’s Atlanta headquarters.

“Since late February, the CDC has lost massive amounts of credibility,” said Jody Lanard, a physician who worked for nearly two decades as a pandemic communications adviser consulting with the World Health Organization.

How could it be possible that a conscienceless, remorseless narcissistic psychopath who thinks only of himself, locked children in cages, doesn’t care whether Americans die of a deadly disease, and publicly attacked Pope Francis, could hold religious people in such low regard? https://t.co/IJLHLcer1C

Trump tax returns are not just good for gossip. Here are 3 reasons voters should care.

Trump didn’t want us to know what was in his returns. Was he honest with the IRS? Did hiding information make him a security risk? Is he fit to lead?

A common trick that tax-evading business owners use is to have the business buy things for them directly, and then not report the purchase as income for the owner. In my time as a federal prosecutor, I saw small businesses pay for their owners’ “home office” renovation — actually a lavish kitchen remodel — or for “compensation” for love interests of the owner that were actually just big gifts.

So when we read that the president claimed deductions for hair styling, private jets and big parties at his home, we are seeing behavior typical of expenditures investigators see in tax-evading family businesses. Sometimes these expenses are legitimate. No, you can’t deduct your hair stylist expenses. But for many questionable business expenses, an IRS auditor would have to give the taxpayer a chance to prove that, say, his mansion really is an investment property, not a playground for his adult children.

[email protected] editorial: Trump routinely overspends, miscalculates and mismanages. His skills as a strategic thinker are nonexistent. OTOH … He excels in tax avoidance, walking out on debts, self-promotion and playing a successful businessman on TV. https://t.co/CNcnFR1CsY

How bad is the coronavirus outbreak in North East England?

Bennett retires after 11 seasons in NFL

Can the House Intel panel move beyond the Trump wars?

Research shows these disturbances can create a sense of belonging —…

Awake review: What would happen if nobody could sleep?

Wildfires Rip Through California, Forcing Tens of Thousands to Flee And Evacuate