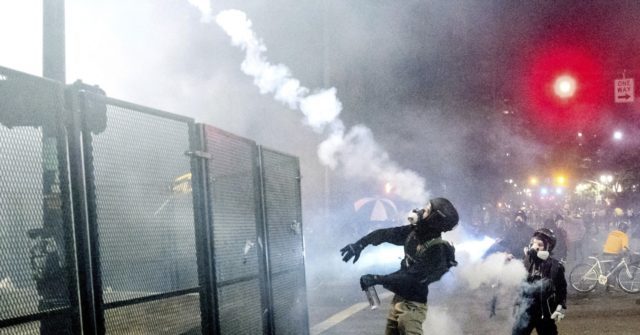 He made clear they are bringing other more rudimentary weapons as well.

Barr said, “Every night for the past two months a mob of hundreds of rioters have laid siege to the federal courthouse and other nearby federal property. The rioters have come equipped for fighting. Armed with powerful slingshots, tasers, sledge hammers, saws, knives, rifles, and explosives devices.”

He noted that a “relatively small number of federal personnel” are stationed inside the courthouse in order to defend it and observed, “What unfolds nightly around the courthouse cannot reasonably be called ‘protest.’”

Barr added, “It is by any objective measure an assault on the government of the United States.”

AG Barr on Portland: “Every night for the past two months, a mob of hundreds of rioters have laid siege to the federal courthouse … armed with rifles and explosive devices.” pic.twitter.com/UWZdnU4YKS

Portland police tweeted a photo of the contraband:

Tonight Portland Police were near Lownsdale Square Park. A person pointed out a bag to them. Inside the bag Police found loaded rifle magazines and Molotov cocktails pic.twitter.com/ytpu9pZjqG

Also on Monday, the Department of Justice tweeted photos containing a broader array of weapons seized during riots outside Portland’s federal courthouse:

AWR Hawkins is an award-winning Second Amendment columnist for Breitbart News and the writer/curator of Down Range with AWR Hawkins, a weekly newsletter focused on all things Second Amendment, also for Breitbart News. He is the political analyst for Armed American Radio. Follow him on Twitter: @AWRHawkins. Reach him at [email protected] You can sign up to get Down Range at breitbart.com/downrange.

This AI turns your home videos into cute cartoons

That was then, this is now — Pakistan edition

Become An Interstellar Engineer In ‘Arcsmith’ On Oculus Quest

Rudy Gobert reflects on microphone incident: ‘If I could go back in time, I…

Capitol Police to step up lawmakers’ security at airports after confrontations

Gone but not forgotten

The Office at 20: What was it really like to star in every episode?

Haitian migrants undeterred by US plan to expel them |…