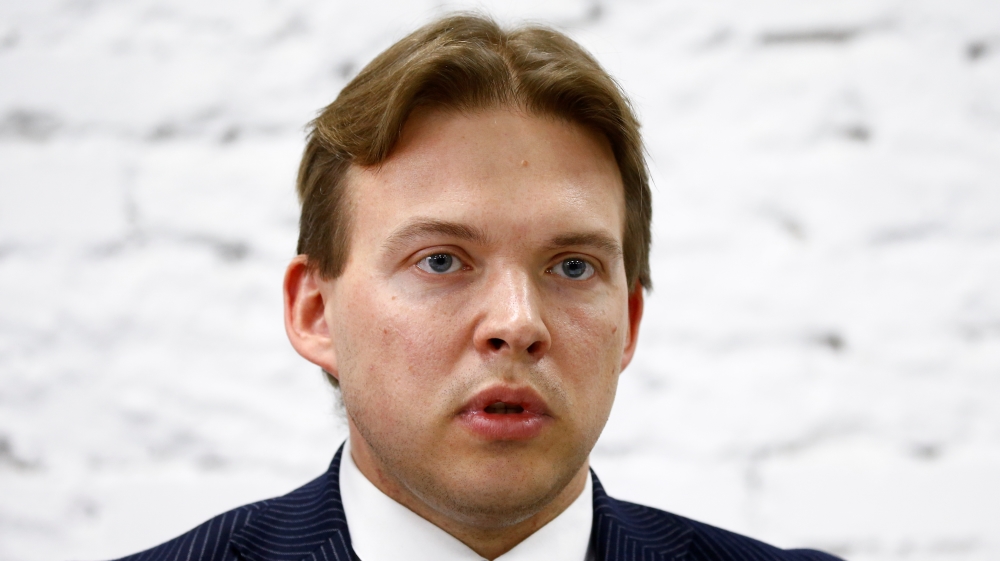 One of the last remaining members of the Belarusian opposition’s Coordination Council at large, lawyer Maxim Znak, has been detained in Minsk by masked men, according to his colleagues.

Znak’s apparent detention came a day after the most prominent opposition figure still in Belarus, Maria Kolesnikova, was detained at the Ukrainian border after she prevented authorities from expelling her by tearing up her passport and jumping out of a car.

Znak, who had worked as a lawyer for jailed presidential hopeful Viktor Babaryko, had been due to participate in a video call but did not show up, instead sending the word “masks” to the group, Babaryko’s press service said on Wednesday.

It said a witness had also seen Znak, 39, being led down the street near his offices by several men in civilian clothes and wearing masks.

Along with Svetlana Alexievich, a 72-year-old Nobel Prize-winning author, Znak was the last of the seven members of the Council’s governing praesidium to remain free.

Others have been detained or forced to leave Belarus, in an intensifying crackdown by President Alexander Lukashenko’s government over a disputed election.

The Coordination Council was set up by the opposition forces to work towards negotiating a peaceful transfer of power after main opposition candidate Svetlana Tikhanovskaya rejected Lukashenko’s claim that he had been re-elected to a sixth term in an August 9 vote.

The disputed election has sparked the biggest anti-government demonstrations of Lukashenko’s 26-year rule, with tens of thousands taking to the streets for weeks to demand he resign.

Lukashenko’s security services hit back with waves of arrests, deadly violence against protesters and a campaign of intimidation and expulsion against opposition leaders.

Meanwhile, Lukashenko is preparing to travel to Moscow for talks with Russian President Vladimir Putin, although no date has been set yet.

Lukashenko gave an interview this week to Russian journalists, including Margarita Simonyan, editor-in-chief of Kremlin-controlled channel RT, in which he warned that if his government falls, “Russia will be next”.

Anti-Kremlin placards could be seen at a huge protest march in Minsk on Sunday.

Can the US and China Cooperate in Space?

Memories create ‘fingerprints’ that reveal how the brain is organized

What is Ontario Trying to Tell Us?

Trump “Not Yet Out Of The Woods” But “Cautiously Optimistic”,…

Beijing official says relations are in a ‘stalemate’

US election 2020: Barack Obama calls for end to voter suppression in John Lewis…

Taylor Heinicke earns respect in Washington, but what next for the QB?

In Pictures: Wildfires continue to rage across US’s California

Book excerpt: ‘How to Die in Space’ on the beauty and danger of nebulas

3 Things To Think About When Recruiting High-Level Executives