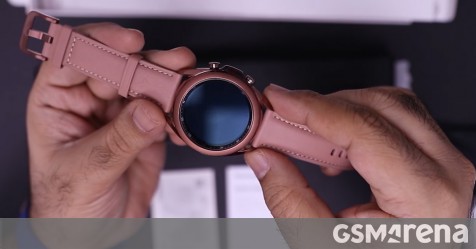 A new video has been published to YouTube by The Mobile Central which shows us a full unboxing, tour, and pairing process for the yet to be released Samsung Galaxy Watch3. According to the video, a retailer (presumably in the UAE) sold this watch ahead of its release date.

We saw another video starring the Galaxy Watch3 surface just several hours ago, but this one isn’t a spy or leak video, it’s a full-on unboxing and setup.

The Watch3 in this video is a Mystic Bronze 41mm version with model number SM-R850. Around the 1-minute mark, the host speculates the possibility of the existence of a larger Fronter version of the Watch3.

Before setting it up, the host compares it to a few other smartwatches including the Apple Watch Series 4, the Samsung Galaxy S3 Frontier Edition, and the original Galaxy Watch.

The New Watch3 will come with a leather wrist strap, through it isn’t confirmed whether its genuine or vegan leather. The initial impression is that materials are of higher quality the watch body. The 41mm size is intended for smaller hands, as the watch band was small on the host’s wrist.

Check out the video past the 05:35 mark where the host goes through the UI of the new Watch3, which does bring back the rotating bezel.

Samsung’s Unpacked event is scheduled for August 5 where the company will unveil the Galaxy Note20 series, the Galaxy Watch3, the Tab S7, Galaxy Z Fold 2, and the Gear Buds Live.

A Look Inside the Justice Department’s National Security Priorities

View Your Stats with Handy Apps for Google Analytics

Apple ships its last Mac with a CRT monitor

Imagine him & Bale: Spurs must swoop for “special” £50m grafter…

Does Trump Need The Next Debate?

How to buy the perfect gaming smartphone