Apple today seeded a new beta of the upcoming macOS 11 Big Sur update to its public beta testing group, allowing non-developers to give the software a try ahead of its public release this fall. The third beta release for public testers comes two weeks after the second beta, and a few days after seeding the sixth beta to developers. 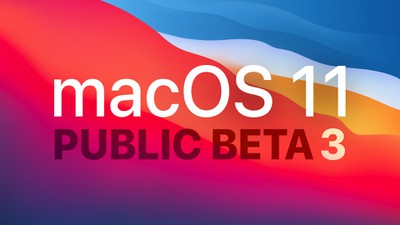 Beta testers who signed up for Apple’s beta testing program can download the macOS Big Sur beta through the Software Update mechanism in System Preferences after installing the proper profile. Though labeled as the sixth beta, this is the third beta that Apple has provided to public beta testers.

Mac users who want to be a part of Apple’s beta testing program can sign up to participate on the beta website, which gives users access to iOS, macOS, watchOS, and tvOS betas. Potential beta testers should make a full backup before installing ‌macOS Big Sur‌, and it may not be wise to install the update on a primary machine because betas can be unstable.

The update brings Control Center to the Mac for the first time, providing quicker access to system controls for things like volume, keyboard brightness, screen brightness, Wi-Fi connection, and more.

An updated Notification Center includes more interactive notifications and redesigned widgets that mirror the new ‌widgets‌ in iOS 14. Notifications are now grouped by app, and you can customize which ‌widgets‌ show up.

Safari has a new customizable start page, built-in translation, and a Privacy Report feature that lets you know which trackers each website is using to follow you across the web. There’s a new Mac App Store category for extensions, and you can now control the specific sites that extensions are able to work with for more privacy.

A redesigned Maps app in macOS Big Sur adds support for Look Around, indoor maps, Guides, and Shared ETA updates, plus it can be used to generate cycling routes and routes with charging stops for electric vehicles, which can be sent to iPhone.

There are also smaller updates for apps like Photos, Music, and Home, with a full list of everything new in macOS Big Sur available in our roundup.

Whitmer: Trump’s Maskless Rallies Are Threatening the Sacrifices Americans Have Made

Forget Vardy: Aston Villa must beware of Leicester dynamo with his “non-stop…

Despite the pandemic, there were tourist destinations in Mexico that managed to…

I deserve to win the Ballon d’Or, says Lewandowski

How the COVID-19 Pandemic Has Changed Cancer Care, In 4 Charts

Boy gets burned by wet cement in rare case

Wilson could land Rangers something different in skilful £5.4m ace who’s like…

Djokovic, Federer, Nadal: Who’s the greatest of them all? | The Guardian…