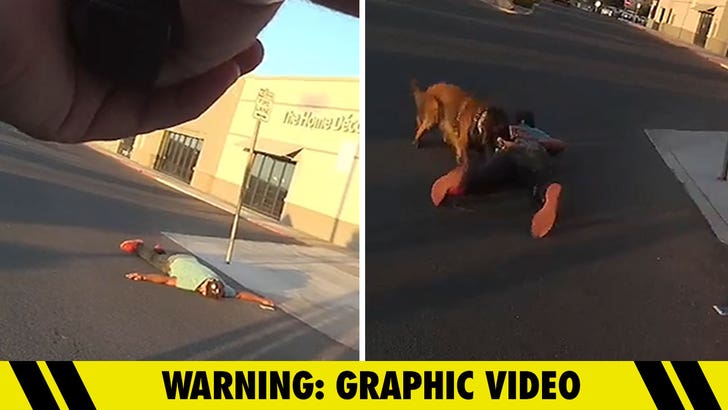 Cops in Arizona say they had to sic one of their K-9s on a guy who was allegedly fleeing in a high-speed chase — and just released body camera footage shows they released a K-9 on him that bit him repeatedly … despite the fact, he seemed to be compliant at the time.

Prescott Valley Police recently tried explaining what happened after reports of alleged excessive use of force back in May on a suspect — 28-year-old Alfredo Saldivar … in which one of their officers released the police dog on him when they appeared to have the guy trapped with guns drawn.

PVPD also released body cam video from at least one officer on the scene, and it seems to show that Saldivar complying with their commands to surrender when another cop, off-camera, released their K-9 partner for some reason.

It’s very graphic, but we’ll just say this … the dude is screaming and begging for them to get the dog off. They look to be taking their time … and even congratulate the K-9 as they approach, saying, “Good boy.”

As for why the dog was used at all when it seemed like Saldivar — whom cops allege was speeding through their town at high rates of speed and initially refusing to pull over — was doing what he was told … the department says it appeared he hesitated while standing up and there was concern he would try to flee (again).

Watch for yourself and draw your own conclusions. In any case, cops say he was treated for non-life-threatening injuries and eventually arrested on a number of felony charges.

In the meantime, the department says it has launched an internal investigative review of the situation.

Daisy May Cooper pens loving, hilarious tribute to husband Will Weston after birth of…

US rivers are changing from blue to yellow and green, satellite images show

WHO Removes Remdesivir From List Of Medicines Used As Benchmark

Cofepris approved phase 3 of the German CureVac vaccine in Mexico