Around 936,000 people in England had Covid last week, according to official data

England’s Covid outbreak started to rise again with around one in 60 people having the virus last week, official statistics show in a sign of the ‘early impact of the Omicron variant’.

The Office for National Statistics infection survey, based on random swabs of around 100,000 people, estimates 936,000 had the virus on any given day in the week ending December 11. It was up five per cent on the previous week, where 891,500 were thought to have the virus daily, but the trend remains ‘uncertain’, statisticians said.

The rise comes after infections flattened in the previous week, with the super mutant variant starting to cause the virus to spread rapidly across the country. Cases have since spiralled to record highs.

Meanwhile, the UK Health Security Agency (UKHSA) today estimated England’s R rate — the number of people someone with the virus infects — is between 1.0 and 1.2, up from 0.9 to 1.1 last week.

Experts said the ONS survey offers the best picture of the pandemic currently, with real infections set to outstrip UK testing capacity in the coming weeks. Some 93,045 cases were recorded across the UK today — the highest number ever — with infections believed to be doubling nationally every two days.

Professor Chris Whitty warned that ‘records will be broken a lot’ by the ultra-infectious variant, which has sent the country into a de facto lockdown with Britons fearful of catching the virus ahead of Christmas. The chief medical officer told MPs on the Health and Social Care Committee that Omicron is spreading so quickly it could send daily hospital admissions above the previous high of 4,500.

And UK Health Security Agency (UKHSA) models estimate Britain’s Covid infections could already be in excess of 400,000 per day.

Welsh First Minister Mark Drakeford today announced new measures including greater social distancing and banning night clubs from Boxing Day in the nation and refused to rule out further measures to tackle the variant. Nicola Sturgeon also braced Brits north of the border for a ‘tsunami’ of the strain, revealing it has become dominant in Scotland and urging people to stay at home in the run-up to Christmas.

England’s Covid outbreak started to rise again with around one in 60 people having the virus last week, official statistics show in a sign of the ‘early impact of the Omicron variant’ 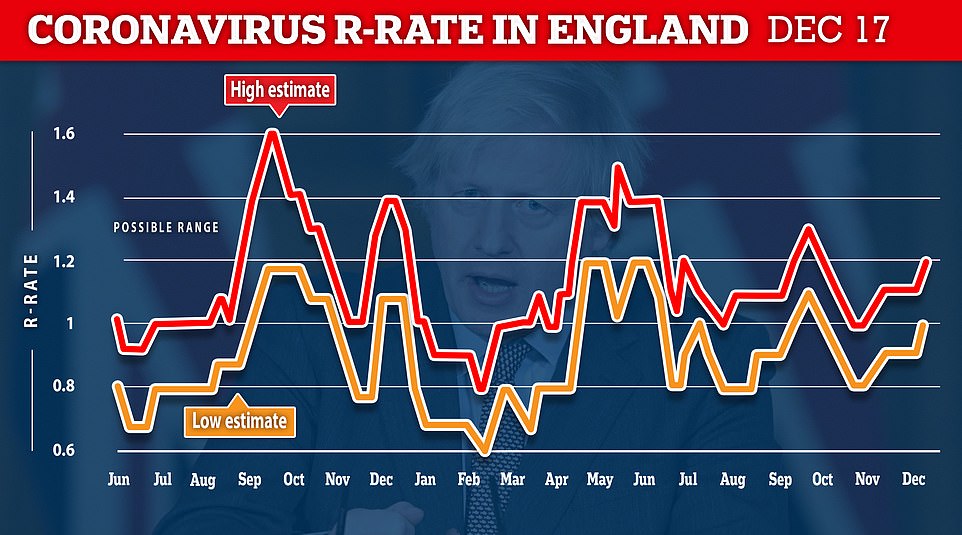 UK Health Security Agency (UKHSA) today estimated England’s R rate — the number of people someone with the virus infects — is between 1.0 and 1.2, up from 0.9 to 1.1 last week 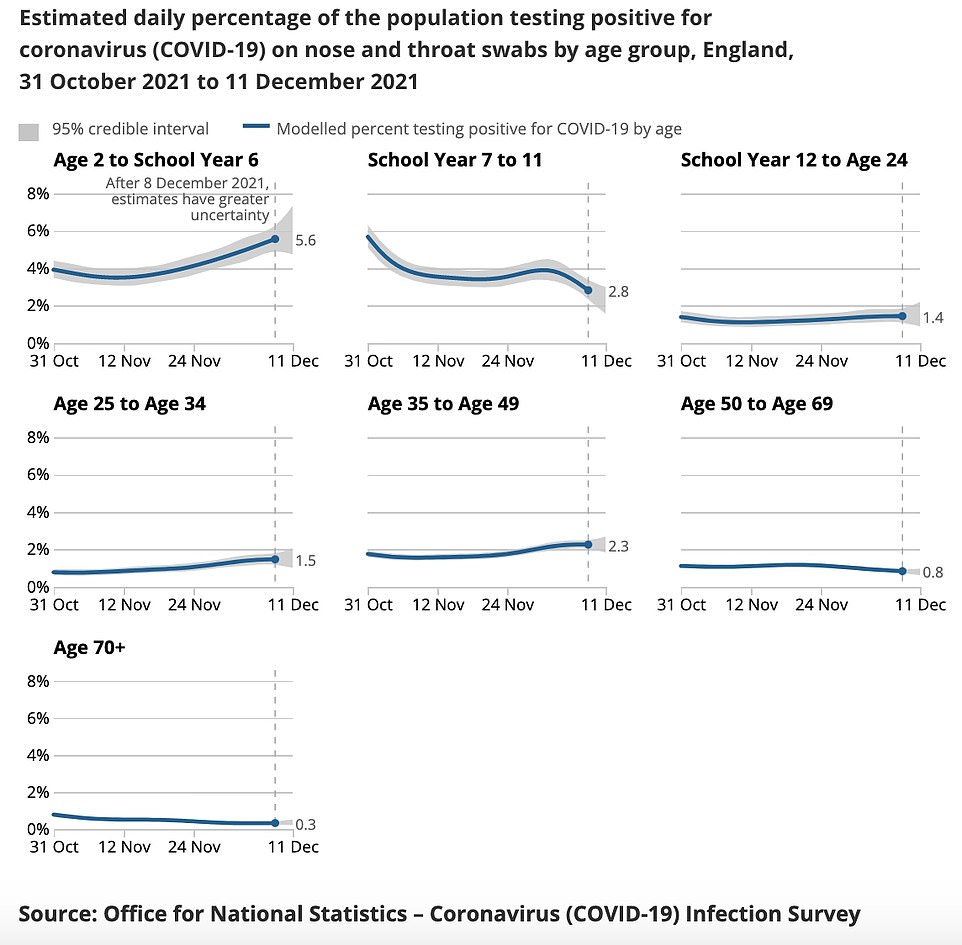 The ONS data show infections increased in children aged two years old to school Year 6, with 5.6 per cent testing positive last week, up from 4.9 per cent the week before 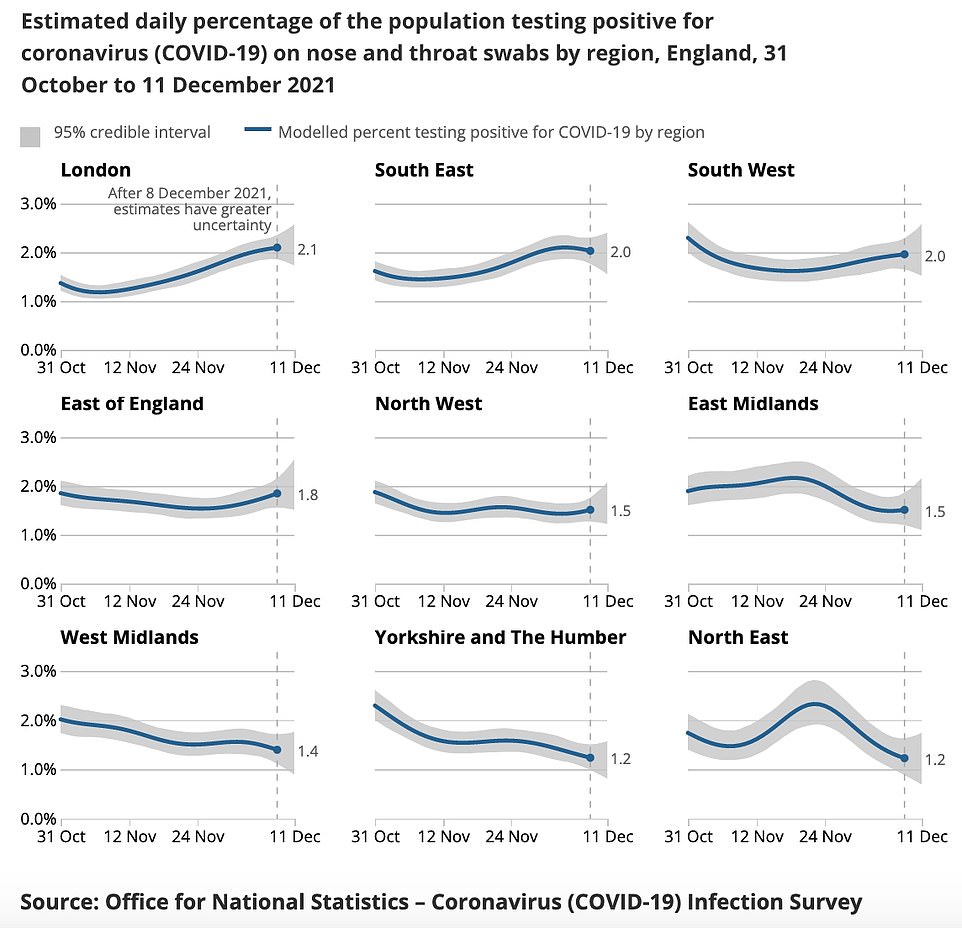 Welsh First Minister Mark Drakeford has not ruled out adding more Covid restrictions after Christmas, as he said there ‘won’t be any parties at nightclubs on New Year’s Eve’.

He announced new legal measures that will come into force on December 27, to slow the spread of the Omicron variant.

Mr Drakeford urged people to downsize their festive plans, saying his own celebrations would be ‘modest’.

The rules to be introduced in 10 days are taken from the country’s Alert level 2, and include bringing back social distancing, barriers and one-way systems in businesses.

The Welsh Government said the plan currently does not include restrictions on private households.

But Mr Drakeford said restricting the number of households allowed to meet remains a possibility, and hinted at the prospect of further restrictions in hospitality settings after Christmas, such as the ‘rule of six’.

‘I’m hopeful that hospitality will reopen after Christmas and we’ll be working with the sector to think about the terms on which it will reopen,’ Mr Drakeford said.

‘People are already voting with their feet and cancelling arrangements because they are anxious about Omicron.

‘It may be that when hospitality reopens we may need to put some extra protections in place so that people feel confident when they go out to a pub or a restaurant, then everything is being done to make sure they are safe.’

The ONS data show infections increased in children aged two years old to school Year 6, with 5.6 per cent testing positive last week, up from 4.9 per cent the week before.

The percentage of people testing positive decreased for those in school Year 7 to 11 and those aged 50 to 69, with the trend ‘uncertain’ in all other age groups.

They fell in the North East and Yorkshire and The Humber, remaining stable in all other regions.

‘Although the Delta variant remains the most common across the UK, we are now seeing the early impact of the Omicron variant in our data.

‘Cases compatible with this variant have increased in England and Scotland, and there were early signs of an increase in Wales.

‘We will continue to closely monitor this variant, which is only possible with the continued involvement of our participants.’

Experts said the ONS figures offer the best insight into the state of the pandemic in Britain, with official Government case data limited by testing capacity and biased by those coming forward for swabs.

Kevin McConway, emeritus professor of applied statistics at The Open University, said: ‘Results from the CIS are going to become increasingly important with the rapid rise of the Omicron variant.

‘You might question why we need them at all, given the monitoring every day of new confirmed cases of Covid, published on the Government dashboard, as well as other information about Omicron new cases specifically.

‘But the snag with most of those numbers is that they are based on the results of PCR and lateral flow device (LFD) tests carried out within the standard testing programmes that we’re all encouraged to use.

‘So, to a considerable extent, they can be affected by who is choosing to be tested.’ 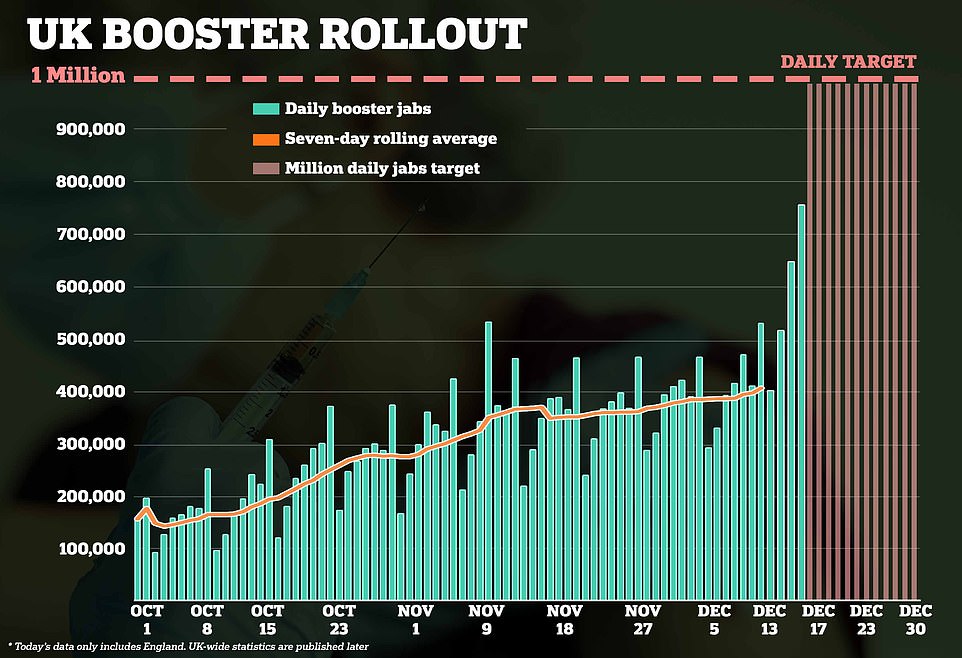 Omicron is now the dominant strain of coronavirus in Scotland, Nicola Sturgeon said as she warned a ‘tsunami’ of the variant is hitting the country.

The First Minister said 51.4% of Covid-19 cases in Scotland are now likely to be Omicron.

The R number, which measures the rate of infection, could be above four and cases of the virus have increased by more than 40% in the past week, the First Minister said during a coronavirus briefing.

She urged people to stay at home in the run-up to Christmas, saying the emergence of Omicron has been the ‘cruellest of blows’.

‘The tsunami I warned about a week ago is now starting to hit us,’ she said.

‘However, and this is a key point, a really key point actually, we shouldn’t be fatalistic about this. We are not powerless in the face of it.’

The First Minister said it ‘seems that boosters are still very effective in reducing the risk of falling seriously ill from Omicron’.

She said it is expected the increase in cases will ‘continue and accelerate’, and stressed the need to slow down the spread of the virus, adding: ‘As of now the scale and the immediacy of the challenge it presents is of profound concern.’

‘Instead it tests a representative sample of the UK community population simply to track the progress of the pandemic.

‘So it isn’t affected by biases arising from the number and type of people who choose to be tested in the standard testing programmes.’

Professor McConway said: ‘If the case numbers arising from the Omicron wave become as high as has been predicted, that will be another compelling reason for the importance of the CIS.

‘So far, the numbers of confirmed cases, while they are getting alarmingly large, have still been within the capacity of the existing standard testing programmes.

‘That is, we can test enough people to detect and record a big proportion of the new cases.

‘But if cases increase a great deal more, there just won’t be the available testing capacity to detect enough of them, so that it’s possible that the daily confirmed case numbers can no longer measure the pandemic accurately. That won’t happen to the CIS.’

The surge in cases has already piled pressure on businesses, with staff unable to come into work and Britons urged to ‘prioritise’ social events, get a booster and do a lateral flow test before meeting people.

Boris Johnson yesterday insisted the Government does not want to ‘lock stuff down’, but fears of catching the variant before Christmas left London in a de facto lockdown in London, with tens of thousands of workers staying at home today.

Omicron is so transmissible that even if it proves to be milder than other variants, it could still cause a surge in hospital admissions, he explained.

The record for the number of people admitted to hospital with Covid is 4,583 set in January.

‘It is possible, because this is going to be very concentrated over a short period of time, even if it’s milder, you could end up with a higher number than that going into hospital on a single day,’ he said.

China Is Laughing: As US Military Begins Purging The Unvaxxed

Shop the hotel looks across the globe

How to Get Offline Maps and Navigation on iPhone

The 10 strangest space structures discovered in 2021

5 Things To Watch Going Into The Midterms