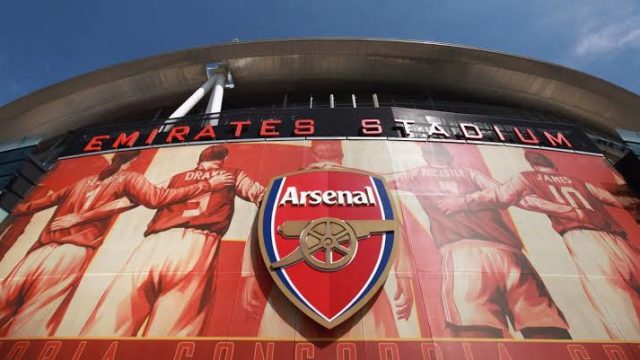 Arsenal featured Nigerian football legend Nwankwo Kanu in the official unveiling video of the club’s third jersey for the 2020/2021 season.

The jersey unveiling was also done with the launch of a ‘This Is Family’ film where the club’s manager Mikel Arteta delivered a heartfelt speech to the Arsenal community.

Arteta explains the importance of being part of the Arsenal family and what it means to him to be part of the club.

According to the premier league club, the new shirt colours are intended to represent the lights and atmosphere that illuminate Emirates Stadium during a night match. The shirt pattern was created from a custom set of tie-dye prints.

The club added that the jersey will be worn on the pitch for the first time when Arsenal kick off the Premier League season against Fulham on Saturday.

Kanu joined the Gunners in 1999 after making the move from Inter Milan for a fee of £4.15 million and quickly became an important player in the second half of his first season.

In his first few games, the Nigerian striker came off the bench to score goals against the likes of Derby, Sheffield Wednesday, Aston Villa and north London rival Tottenham.

The striker scored 17 goals in his first full season, including an unforgettable 15-minute hat-trick against Chelsea, and helped Arsenal reach the UEFA Cup final.

Kanu remains a popular figure who enjoyed a great following among Arsenal fans during and after his five-and-a-half years at the club. He was part of the Invincibles team from 2003-2004. He scored 43 Premier League goals in 195 games.

How Trump Could Win Pennsylvania Again

Particles in Quark-Gluon Plasma Move in the Same Way as in Water, Physicists Discover…

How To Play SteamVR Games On The Oculus Quest 2

Rocket Lab calls off microsatellite launch due to sensor issue

How to Keep Your Sales Team Productive During the Holidays

The athletes who inspired us in 2020

Homeownership is becoming harder for US renters | Business and Economy News

Afghan soldiers killed in Taliban attack on Paktia military base

GOP Senators Including Cruz, Blackburn to ‘Reject the Electors from Disputed…