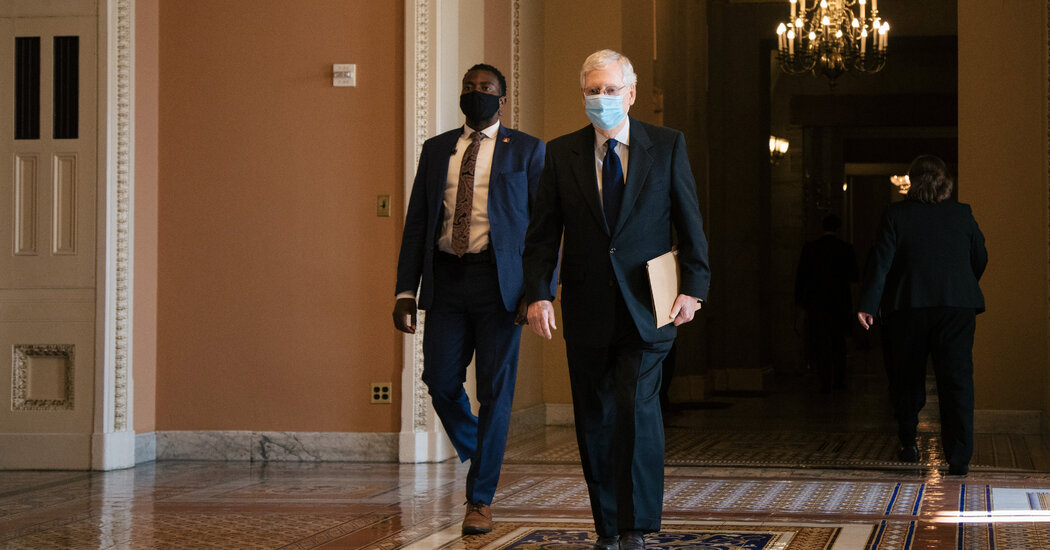 WASHINGTON — Senate Republicans and the White House on Monday threw their support behind a substantial cut in jobless aid for tens of millions of Americans laid off amid the pandemic, proposing a weekly reduction of $ 400 to a benefit that has cushioned the nation’s economy even as coronavirus cases continue to rise across the country.

The proposal was part of a $ 1 trillion opening bid that would have to be reconciled with Democrats, who were pushing a recovery package that would spend three times as much and extend the $ 600 per week in extra unemployment aid through the end of the year.

Economists say that the money, slated to expire this week, has provided a crucial economic buffer for the unemployed, and that lowering the payments could have a cascade of damaging effects across the economy. But Republicans contend that it is too generous, discouraging Americans from returning to work and hampering a recovery.

The Senate Republicans’ decision to embrace the decrease reflects the predicament in which they find themselves during a worsening pandemic and continued economic recession, little more than three months before Election Day. With a small but vital bloc of conservative senators opposed to providing any more federal coronavirus aid, the Republican Party has struggled to agree on how to stabilize the battered economy, leaving Democrats with crucial leverage for an intense set of negotiations over the relief package.

Even as Republicans rolled out their proposal on Monday evening, Mark Meadows, the White House chief of staff, and Steven Mnuchin, the Treasury secretary, were huddled in Speaker Nancy Pelosi’s Capitol office suite, meeting with top Democratic leaders in a reflection of their influence in the talks.

With the two sides far apart, it appeared unlikely that they could bridge their differences in time to avert a lapse on Friday of the supplemental jobless aid, nor was it guaranteed that they would be able to do so at all. That left uncertain the fate of President Trump’s best hope of injecting one last shot of stimulus into the economy before the general election in November.

Complicating the picture, Republicans and the White House continued to bicker over the contents of the package even after it was announced, with Senator Mitch McConnell, Republican of Kentucky and the majority leader, appearing surprised that it included funding for a new F.B.I. building that has long been an obsession of Mr. Trump’s.

“I don’t think there is funding, is there?” Mr. McConnell said to reporters who asked about the money, which is designated as a coronavirus-related emergency in the draft bill. Assured that it was, he said the administration would “have to answer the question on why they insisted on that provision.”

Republicans had hoped to avoid this situation altogether, knowing that many in their ranks had grown exhausted with the torrent of federal spending — nearly $ 3 trillion — that Congress approved in rapid succession in early spring. They resisted passing another package, gambling that if they waited, the virus would dissipate and the economy would rebound, and that they could push through a bare-bones package.

Instead, they are now staring down the beginning of the school year with skyrocketing cases and record unemployment levels, with many in their ranks unwilling to pour any more money into the economy. Their proposal spends more than many Republicans are likely to support, and it will most likely grow as Democrats place their stamp on it.

“There is significant resistance to yet another trillion dollars,” Senator Ted Cruz, Republican of Texas, told reporters on Monday. “As it stands now, I think it’s likely that you’ll see a number of Republicans in opposition to this bill and expressing serious concerns.”

The policy gulf between the two parties has widened in recent days to the point where top White House officials have begun to float the prospect of a narrow bill to address the unemployment benefits, liability protections and school funding, eschewing Democratic priorities and other objectives in an effort to address what they deem to be more immediate needs. Democrats have rejected such a plan.

“We have produced a tailored and targeted draft that will cut right to the heart of three distinct crises facing our country: getting kids back in school, getting workers back to work and winning the health care fight against the virus,” Mr. McConnell said as he led about a dozen Republican senators in unveiling the legislation on the Senate floor. House Democrats’ proposal, he said, amounted to a “multitrillion dollar socialist manifesto.”

The package of bills rolled out on Monday included a new round of $ 1,200 direct payments to Americans earning $ 75,000 or less per year. In line with Mr. Trump’s demands, it would reserve tens of billions of dollars in federal funding for schools that reopen for in-person instruction.

It would limit legal liability for businesses that open amid the pandemic, a top priority of business groups in Washington, for coronavirus-related episodes that take place through October 2024. It establishes a tax credit for companies to reconfigure their workplaces to promote safety from the virus, and it would expand tax credits for employers that hire and retain workers amid the outbreak. The proposal would also offer tax certainty to Americans who work in one state and live in another, and are facing the prospect of paying income taxes in multiple states if they were forced to work from home.

The package would both extend government aid for small businesses through the Paycheck Protection Program, which was established in March, and narrow the set of companies eligible to receive it. It would also create an alternate source of aid for businesses in low-income, high-poverty areas: a 20-year loan, with an interest rate of 1 percent, that would give those businesses enough cash to replace up to two years of lost revenues.

It also includes a bipartisan proposal to force Congress to consider future deficit and debt-reduction measures.

The introduction of the package had been delayed for days as Republicans worked to resolve internal divisions with each other and Mr. Trump and to put forward a united front before negotiations with Democrats. But on Monday, the measure already faced resistance by some rank-and-file Republicans and was scorned by Democrats in both chambers, who said it failed to meet even a fraction of the country’s economic and health needs.

“If they’re not even getting to the fundamentals of food and rent and economic survival, they’re not really ready to have a serious negotiation,” Ms. Pelosi said after a nearly two-hour meeting with Mr. Mnuchin, Mr. Meadows and Senator Chuck Schumer of New York, the Democratic leader.

Mr. Schumer added, “We hope they can get their act together — we very much want to get something done for the needs of the people.”

Mr. Meadows, as he left Ms. Pelosi’s office with Mr. Mnuchin, declared it a good meeting and said the pair would return on Tuesday. Both Democratic leaders said they planned to carefully review the Republican offer overnight.

The disconnect between the parties has already allowed the additional $ 600-per-week unemployment benefit to expire for many workers, a move that could prove more harmful if households opt to make precautionary spending cuts without the guarantee of more relief.

Mr. Meadows and Mr. Mnuchin sought to leave an indelible mark on the package on behalf of Mr. Trump, spending a weekend on Capitol Hill meeting with Senate staff — an unusual step for senior cabinet officials — to hammer out the technical details of the unemployment proposal.

While the two men ultimately agreed to drop demands for a payroll tax cut — a presidential priority dismissed by members of both parties — they succeeded in securing $ 1.75 billion for the design and construction of a new building for the F.B.I. Headquarters across from Mr. Trump’s luxury hotel in downtown Washington, in which he has repeatedly shown a personal interest.

The proposal to cut the jobless aid by two-thirds is likely to be among the most bitterly contested issues in the negotiations to come.

Many Republicans oppose the supplemental jobless aid, arguing that it is a disincentive to returning to work because it exceeds what some workers can earn in regular wages. The Republican plan envisions eventually shifting to a new system of calculating federal aid that would cap benefits at about 70 percent of a worker’s prior income, which would also amount to about $ 200 per week. Most Democrats say state unemployment systems were already struggling to handle distribution of the $ 600 lump sum, and would be challenged to adapt to a new system.

The Republican proposal would also establish a liability shield for businesses, schools and hospitals open during the pandemic from facing claims over episodes related to the coronavirus. Mr. McConnell has repeatedly deemed such a provision to be a prerequisite for any further aid bill, while Democrats have instead pushed for federal protections for workers against the coronavirus.

Republicans also set aside $ 105 billion in aid for schools, with $ 70 billion going to elementary and secondary schools, two-thirds of it reserved for institutions that have begun reopening and holding some in-person classes. Another $ 30 billion would go to colleges and universities.

Overcoming opposition from the White House, Republicans also set aside $ 16 billion in new funding for states to conduct coronavirus testing and contact tracing, as well as additional aid for top health agencies and efforts to support the response to the pandemic and potentially distribute a global vaccine.

Once Again, a Nation Cuts It Too Close for Comfort

Your Likelihood of Contracting COVID-19 May Not Be Age-Dependent, Study Shows

Do all state and local workers receive lifetime annuities?

Recipe video: How to make the Shangri-La’s signature negroni cocktail

Nigel Farage Is Back with a Bang, Beats Sky News UK

Over 1,000 await flight clearance to leave Afghan city of Mazar-i-Sharif