Australia to Quarantine Even Fully Vaccinated Flying to Australia

The joke use to be “going postal” because so many postal workers were killing co-workers decades ago. Now they are calling it “going-Australian,” meaning they are leading the charge on the most anti-human rights regime in the world. They have matched the Nazis blocking travel even between states. Now they are even saying that FULLY VACCINATED may still have to quarantine for two weeks coming into Australia, which will end any dreams of tourism. What they are acknowledging, without admitting, is that vaccines at the very best may lessen what you contract like a flu shot, but it will NEVER prevent you from getting or spreading COVID. 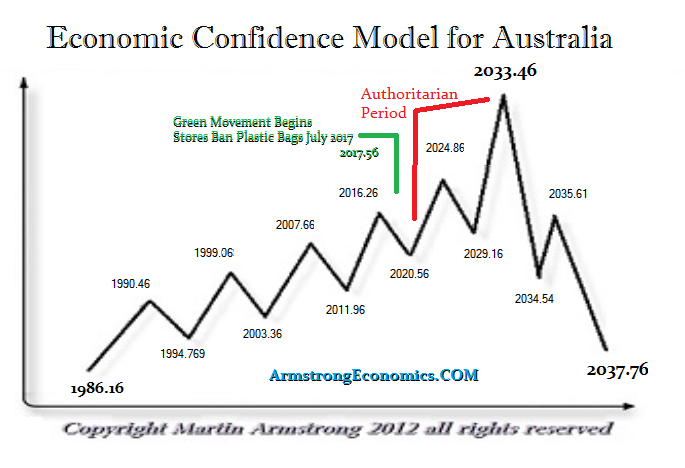 People are beginning to see that this has been just an excuse to move toward what their politicians have admitted is a new world order down-under. This has nothing to do with health, but everything to do with social control. The most ruthless state, Victoria, locks you down and requires you to send a photo to prove you are home using facial recognition. This is wholesale imprisonment and many see this as Australia moving full circle, whereas it began as a penal colony. Australia actually did not gain its independence from Britain until March 3, 1986. The ECM plotted for Australia shows that its tyrannical regime began with COVID in 2020.56. The first case in Australia was on January 19, 2020, and Victoria imposed its first lockdown on March 10, 2020.

There is no way the government will reverse its position. This is all about restricting the total economy, not really about a health crisis. In fact, even the UK-based Evidence-Based Medicine Consultancy Ltd submitted to the Medicines and Healthcare Products Regulatory Agency (MHRA) in Britain which states bluntly that “the MHRA now has more than enough evidence on the Yellow Card system to declare the COVID-19 vaccines unsafe for use in humans.”

Without question, governments are mandating these vaccines and are not concerned about the health of people or the injuries they are causing. Instead, this is the excuse to prevent travel and to ensure that there will be no uprising against the government as they impose Schwab’s Great Reset and the intended default of all government debt.

Is Wokeness Almost Over?

I will Survive Fauci

Angel Olsen Covers Karen Dalton’s ‘Something on Your Mind’

Having a mezuzah on the vice president’s house makes Jews feel seen. Thank you,…

Apple is getting coal this year because the iPhone is doomed

Looking for a Startup Idea? Here Are 10 That You Can Steal from Successful…

Over 20,000 Americans March in Washington DC Against Vaccine Mandates and Medical Tyranny