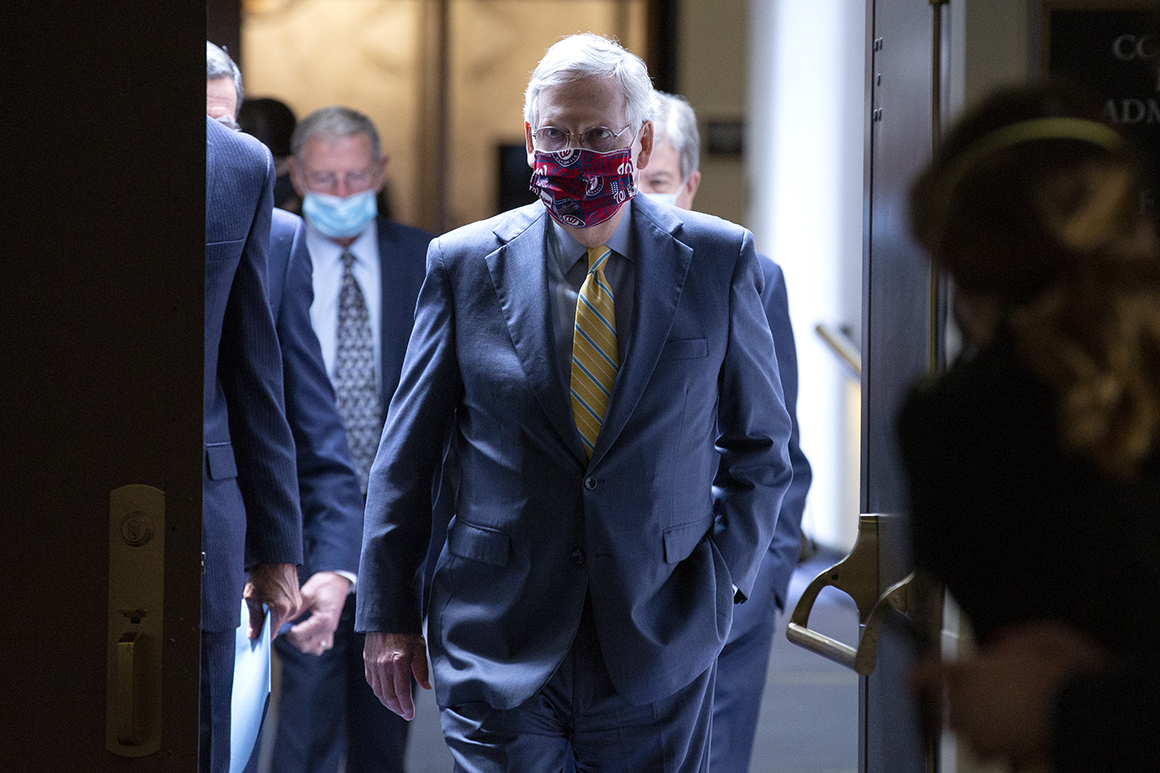 The House and Senate return Monday to face a critical three-week stretch ahead of the August recess, with both chambers under immense pressure to deliver another trillion dollar-plus relief package amid an alarming rise in coronavirus cases.

With the economy stinging from its worst recession in decades, congressional leaders also have just a handful of days to prevent tens of millions of people from losing jobless benefits that had been dramatically scaled up during the pandemic — one of the most contentious issues lawmakers must work through. Millions more are at risk of losing federal eviction protections by month’s end, which have already expired in some states.

In the same time frame, the House will tackle some of its heftiest legislation of the year, with floor votes on almost all spending bills, likely requiring at least some wrangling from Democratic leadership to get across the finish line. The House will also take up a $ 740 billion defense bill that President Donald Trump has threatened to veto because it would rename several military bases honoring Confederate leaders.

“We’ve got a lot to do,” Rep. Dan Kildee (D-Mich.) said, ticking off the agenda items over the next two weeks. But he added: “The harder challenge is how we get the next relief bill through.”

“I think they’re going to feel a kind of heat they’ve never felt before,” Kildee said of the GOP’s resistance to extending the extra $ 600 per week in jobless benefits that expire at month’s end. “It’s not just like at midnight on July 31 we can vote and solve this problem. We have to get it done in time for states to get the necessary steps to not kick people off the system.”

Hundreds of lawmakers flying or driving in from across the country, as well as their staff, will return to Washington amid the largest surge in U.S. cases since the pandemic first hit months ago. Top lawmakers have been closely consulting with the Capitol physician, though some members and aides have privately voiced concerns about how they’ll be able to keep safe amid dozens of votes the next several weeks.

Leaders of the House GOP conference — whose members have been far more lax about wearing masks and social distancing — have signaled it will step up precautions. GOP leadership circulated a list of rules it plans to enforce at its private meetings, such as requiring masks and checking temperatures at the door, according to a notice obtained by POLITICO.

The GOP’s change in posture comes after Rep. Morgan Griffith (R-Va.) tested positive for coronavirus days after participating in a news conference with other members of the House Freedom Caucus.

“We have taken the precautions necessary,” House Minority Leader Kevin McCarthy (R-Calif.) told reporters Friday when asked whether the conference would step up its safety measures after last week’s positive case.

McCarthy also noted that leaders in both parties have tailored the floor schedule for the upcoming week to limit the number of total votes, pointing to a hefty lineup of spending bills, which typically have dozens, if not hundreds, of amendments. This year, House leaders will hold amendment votes in large blocks to minimize the number of total votes, and therefore exposure on the House floor.

Congressional leaders also say they have improved testing capabilities in the Capitol, and members who need a coronavirus test are able to get one — although senior aides gave differing accounts about how long it takes lawmakers to learn of their results.

There are also growing concerns from lawmaker offices about when and how to bring back staff, particularly as the House takes up more amendment-heavy bills that some say are more difficult to manage remotely. For now, members have been advised to have no more than a handful of people in their personal offices.

It is the economic recovery package that will dominate the agenda of Senate Majority Leader Mitch McConnell and Speaker Nancy Pelosi for the next few weeks. Both sides are expected to begin negotiations on a fifth tranche of emergency aid in the coming days, with a shared goal of signing something into law within three weeks.

The House is currently slated to depart for recess on July 31, with the Senate following the week after, though House members have been advised not to make plans the first week of August.

For now, both sides have been largely posturing with little to no attempts at negotiation.

Even before the start of formal talks, congressional leaders have drawn fierce battle lines about their own priorities for the package — an ominous sign for what’s expected to be the most difficult set of negotiations so far in Congress’ pandemic response.

With the economy sputtering and the fate of millions of schoolchildren uncertain this fall, GOP leaders say they plan to prioritize legal protections for businesses that reopen during the pandemic, as well as money to help schools that plan to welcome back students in person.

McConnell plans to introduce a GOP bill this week and discuss the proposal with his caucus. The Senate GOP also plans to push for hiring incentives for businesses, as well as additional money for health care providers, testing and vaccines, according to a GOP aide.

But Democrats have refused to consider legal protections for businesses without a ramp-up in worker protections — something the GOP has resisted —and have privately discussed blocking McConnell from advancing any coronavirus bill on the floor until he agrees to bipartisan negotiations.

Senate Minority Leader Chuck Schumer (D-N.Y.) said Friday he had yet to hear from McConnell or Treasury Secretary Steven Mnuchin and urged for passage of the House’s $ 3 trillion Heroes Act, which the lower chamber approved in mid-May.

“Sen. McConnell is trying to draft a bill in his office,” Schumer said on a press call. “But he knows that a bill just drafted by Republicans won’t become law, he saw that in Covid 2, Covid 3, Covid 3.5. McConnell knows from the previous Covid bills that to pass a bill in the Senate he’s got to work across the aisle.”

McConnell circulated a draft of Republicans’ liability demands late last week and is expected to present the GOP’s coronavirus proposal to Senate Republicans at lunch on Tuesday.

Democrats, meanwhile, are demanding more money for state and local aid, food security, renewal of boosted unemployment benefits set to expire at the end of July and another round of stimulus checks for many Americans.

Further complicating the talks, the White House said Friday it will push for 10 percent of the next coronavirus relief package to be set aside for “nonpublic schools and education freedom scholarships.”

In addition, Trump is making a renewed demand for a payroll tax cut in the next relief package, an idea that has been panned by lawmakers in both parties. The House GOP also included the payroll tax cut in its list of priorities in a notice to members on Friday.

Republicans have balked at the $ 3 trillion relief proposal House Democrats passed two months ago. McConnell has said the next — and possibly last coronavirus aid bill — will come to a far less, but still eye-popping total of around $ 1 trillion.

But Pelosi has continued to dismiss Republicans’ concerns about cost, telling reporters late last week that this bill “is about the survival of our economy.

“If we don’t invest the money now, it’ll be much worse,” she said.

“If we don’t invest in further testing and getting the equipment to do it, it will be worse. If we don’t put money in the pockets of the American people with their direct payments and unemployment insurance, it will be much worse.”

Today in Apple history: iPod gets a new Click Wheel

T.I. Shares An Exciting Message On Social Media – Check It Out Here

How to Set a Video as Wallpaper on iPhone & iPad

A Guide To Effective Performance Management

Biden Heads Overseas as His Prospects Darken at Home