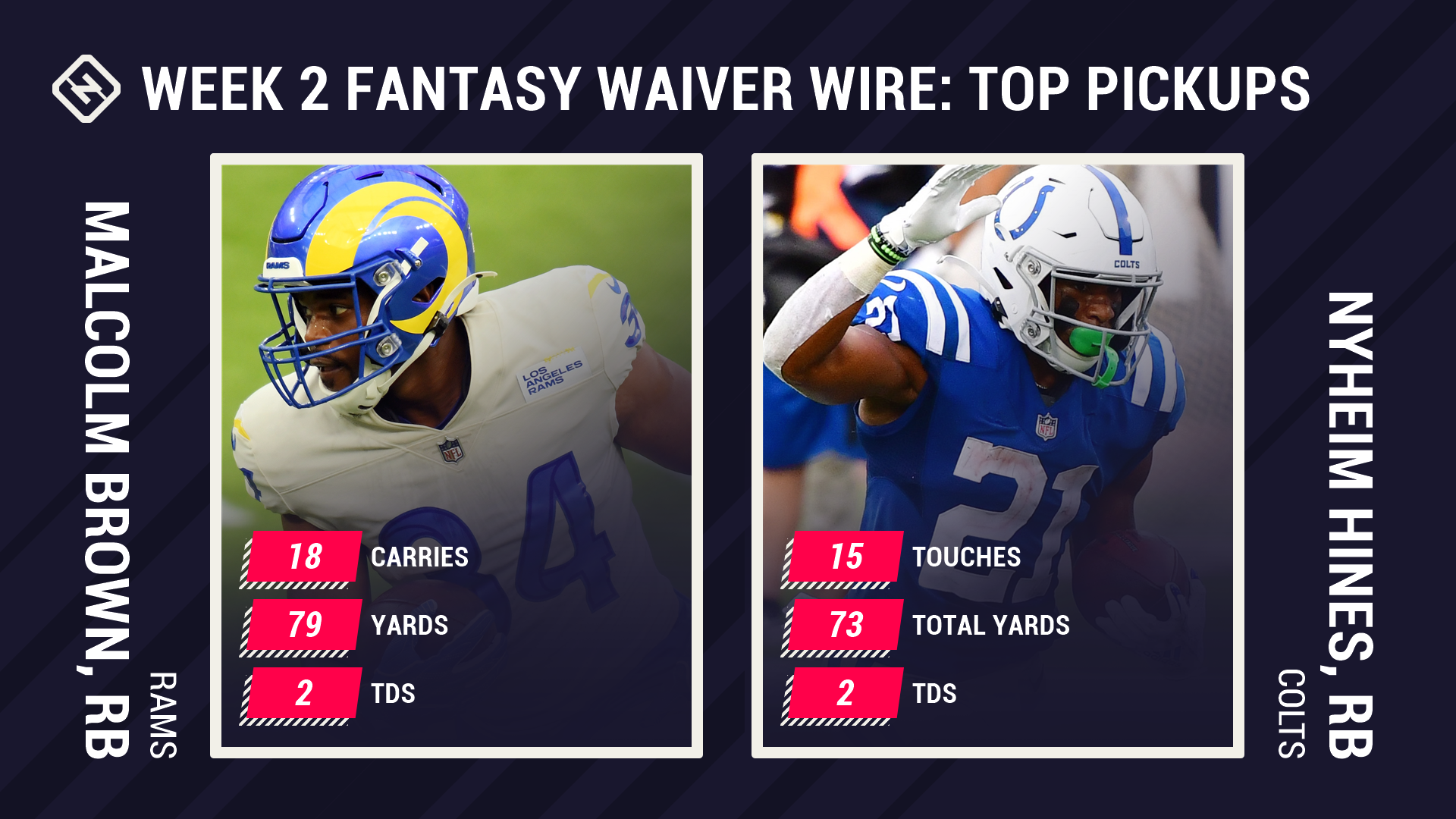 There are always surprise breakouts (Malcolm Brown, Dallas Goedert, Nyheim Hines, Joshua Kelley) and some big injuries (Marlon Mack, Le’Veon Bell) in the season’s opening week. Often, fantasy football owners overreact, giving up on their favorite preseason sleepers and rushing to add a random rookie who caught a TD (Laviska Shenault Jr.) or veteran who received a surprising amount of touches (Peyton Barber, Adrian Peterson). The bottom line is fantasy football is often a reactionary game, so when you see someone like Logan Thomas, Jimmy Graham, or Robby Anderson have a good performance, you figure you should grab them — even if it’s the best outing they’ll have all year. The top Week 2 fantasy waiver wire pickups and free agent adds are full of guys who might have already peaked, but that doesn’t mean you shouldn’t consider claiming them.

Our full free agent list features more than just reactionary picks. Some players might not have had huge games, but their usage suggests bigger things are yet to come. Injuries also play a major role in predicting future value, so grabbing some backups now can really pay off. Of course, there are also a host of players who went underdrafted, and even if they had mediocre opening games, better things are yet to come. We also have some potential TE and D/ST streamers at the end of of the list (because it’s never too early to stream). And if you already want a new kicker (and why wouldn’t you?), our Week 2 kicker rankings can help you find an upgrade.

Whether to use a top waiver claim this week is a tough question. While certain players like Brown, Hines, Kelley, and Goedert have plenty of long-term upside, it’s unlikely anyone would categorize them as true difference-makers without even more injuries. It’s tough to let potential starters like that pass through waivers, but that’s the blessing and curse of having a top claim — you want to save it for when a more obvious long-term producer is available. But if that’s not your style — or you think you need a particular player — you can feel comfortable making a move and grabbing some solid contributors like the players listed below.

Unless otherwise noted, only players owned in fewer than 50 percent of Yahoo leagues considered.

Malcolm Brown, RB, Rams. Cam Akers get the start for the Rams on Sunday night, but it was Brown who shined, leading the team in carries (18), rushing yards (79) and touchdowns (2). Akers still had 14 carries, but he managed just 39 yards on the ground. Perhaps even more damning is that Brown outplayed Akers in the receiving game, catching three-of-four targets for 31 yards compared to just one catch for four yards for Akers. Akers is still the superior talent and could easily outperform Brown next week, but at this point, it’s likely Brown will continue to get the majority of reps until Akers can wrestle the job away from him. Brown should be owned in far more than 25 percent of Yahoo leagues. — Matt Lutovsky

Nyheim Hines, RB, Colts. With Marlon Mack (Achilles’) expected to miss the rest of the season, everyone on the Colts RB depth chart bumps up a spot. That means Jonathan Taylor figures to be the primary ball carrier, but Hines proved in Week 1 he’ll be heavily involved, too. Even before Mack left the game against Jacksonville, Hines was stealing touches. He finished with 73 total yards and two TDs and on 15 touches (eight receptions). Not all matchups are going to be as favorable as this one, but Hines should continue to get 12-plus touches per game going forward, making him valuable in standard leagues as well as a borderline every-week play in PPR formats.

Dallas Goedert, TE, Eagles. Much has been made of the Eagles’ WR injury woes, but even Jalen Reagor back and DeSean Jackson healthy, it was Goedert who led the team in receptions (8), targets (9), and yards (101). He also caught one of Carson Wentz’s two TD tosses. Fellow TE Zach Ertz caught the other, but it’s worth noting that Ertz had just three catches and 18 yards on seven targets. Goedert isn’t suddenly “better than Ertz,” but he’s clearly going to be an important receiver in the Eagles’ system.

Joshua Kelley, RB, Chargers. Austin Ekeler is still the “lead back” in Los Angeles, which was shown by his 19 carries in Week 1, but Kelley is clearly his top backup — and he could easiliy have flex value most weeks regardless of Ekeler’s health. Kelley ran 12 times for 60 yars and a score in his debut, getting multiple goal-line touches and generally looking impressive at all points on the field. The 5-11, 212-pound bruiser out of UCLA has a lot of upside with 10-plus touches per game, and it’s possible he even takes over as the primary runner if the Chargers prefer to utilize Ekeler in more of a receiving-back role. Either way, Kelley is a must-have handcuff for Ekeler owners, and he’s worth grabbing even if you don’t own Ekeler.

Peyton Barber, RB, Washington. Someone had to get the carries for Washington, and Barber took the bulk of them in Week 1. He ran 17 times (eight more than Antonio Gibson) and scored twice on goal-line carries. His 29 yards leaves a lot to be desired and probably tells us more about his long-term prospects than two random TDs, but all “lead backs” have potential value (especially if they get goal-line touches), and right now, Barber looks like the lead guy in Washington. That could change in a hurry — especially if they’re not playing with a second-half lead — but at the very least, Barber is worth grabbing as a free agent.

How Manchester City lost their mojo

Obama and Clooney team up to raise money for Biden

Freight smart cities on the anvil to reduce logistics cost

“Don’t Complain, Do Something”: What Kamala Harris Learnt From Her…

Will NFL teams look down on players who opt out?

How to use ‘controversial’ content to drive high-quality backlinks

The Palestinians problem with the Authority

WHO Declares Africa Free Of Poliovirus