Best in the West? Lakers, Clips on collision course 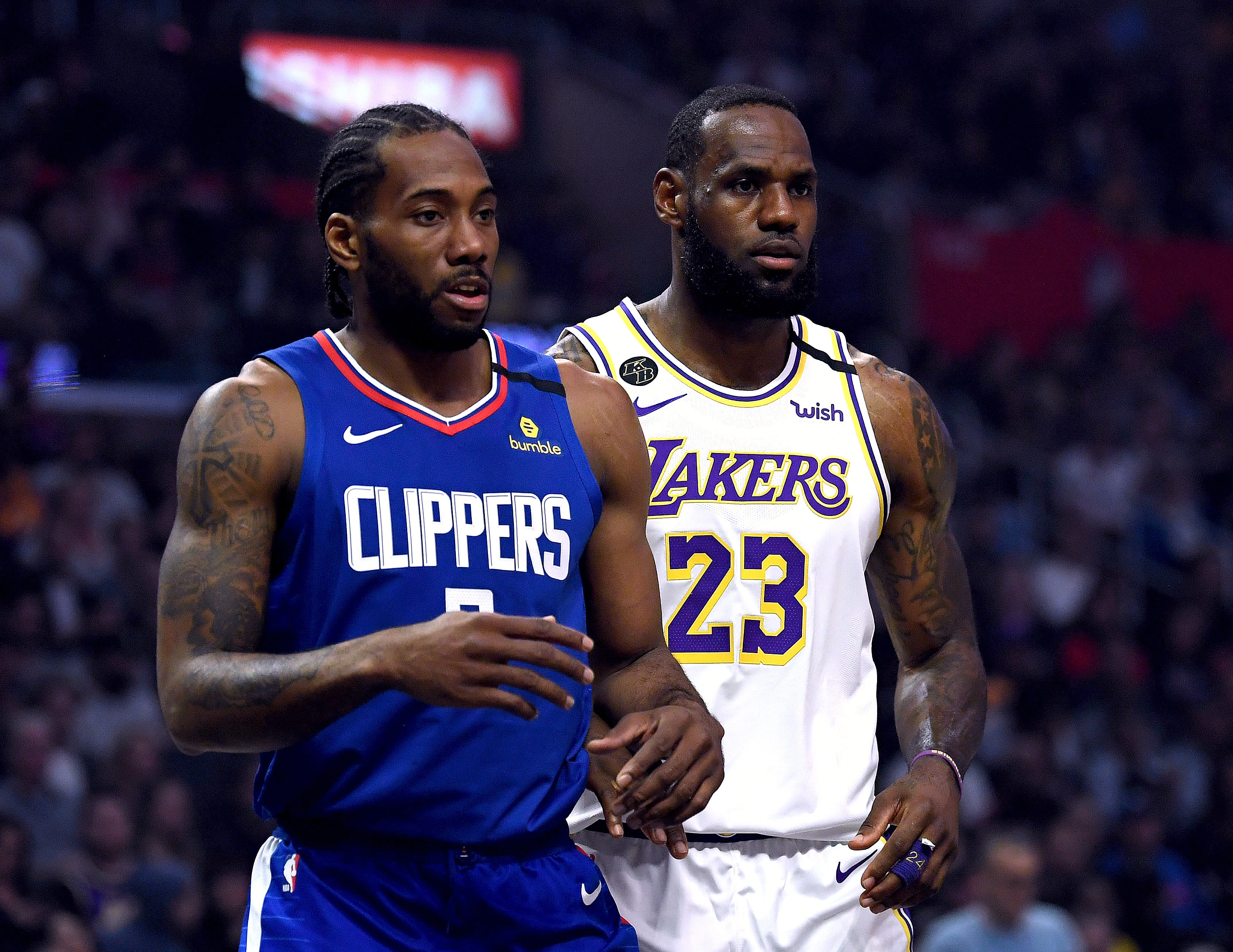 You can count on one hand the number of players who have gone toe-to-toe with Los Angeles Lakers superstar LeBron James in the playoffs over the past 15 years. Only two of them will be on the court in the NBA’s bubble, and they have joined forces on his chief Western Conference rival.

In 2013 and 2014, when James was at his peak, Paul George and Kawhi Leonard respectively played consecutive Eastern Conference finals and NBA Finals against the four-time MVP, finishing with a 12-13 record, including a pair of seven-game series. Nobody else but Kevin Durant has come so close over the past decade to unseating James as the game’s most dominant two-way player.

Their matchups have delivered some of the most breathtaking basketball we have seen in recent memory, and with any luck they will give us another series with Anthony Davis thrown into the mix.

Actually, it feels less like luck and more like inevitability. According to FiveThirtyEight’s projections, the Lakers and Clippers share 81 percent of the odds of winning the Western Conference finals. The Houston Rockets have a 13 percent chance, and no other team has better than a 3 percent shot.

Same goes for the casinos. The Lakers and Clippers are far and away the favorites to reach the conference finals, per BetMGM. Houston’s long-shot odds are between three and four times as high as the two L.A. teams, and no other West team is given better than a 14-to-1 shot of making it.

Statistical analyses yield similar projections. The Lakers and Clippers are the only two teams in the West to rank in the top five in both offensive and defensive rating, generally a predictor of playoff success. The only other team with a net rating within three points per 100 possessions of either L.A. team is the seventh-place Dallas Mavericks, who since losing starting center Dwight Powell to a season-ending injury have dipped closer to a pack that also includes Houston, Utah and Denver.

Of the stars left standing in the West, only six have been a conference finalist’s best player since 2010: James, Leonard, George, James Harden, Damian Lillard and Dwight Howard. Four play for the Lakers and Clippers, and Lillard is not currently in the playoffs. Conceding that the current Lakers version of Howard is no longer playing at an All-NBA level, the addition of Davis alongside James further illustrates why the odds are so heavily in favor of the two L.A. teams. Stars advance.

It is hard to imagine any West team other than the Rockets matching their star power, especially since the Jazz lost second-leading scorer Bojan Bogdanovic to injury, and Russell Westbrook hardly complements Harden the way more versatile Lakers and Clippers duos do on both ends of the floor. Houston looms as a greater threat to the Lakers than the Clippers, if only because the former lost two of its hardest-hitting backcourt counterpunches, Avery Bradley and Rajon Rondo, and the latter is better equipped to beat the Rockets at their own small-ball game, if if comes down to matchups.

But there is nobody outside Houston picking Harden and Westbrook over James and Davis, and I’m not sure number-crunching Rockets general manager Daryl Morey would make that bet if he could. Same goes for the Nuggets, who are next in line to be the fourth West semifinalist, barring a 3-6 matchup with Houston. Are you taking Nikola Jokic and Jamal Murray over Leonard and George?

Let us dispense with the long odds against the two L.A. teams meeting for a moment and get to the real question: Who wins in a matchup of the two? It is easy to take James, arguably the second-greatest player in the history of the game, whose string of eight straight Finals appearances ended in injury last season. He has never had an in-his-prime partner quite like Davis, and the hodgepodge of veterans that Lakers GM Rob Pelinka put around them this season meshed better than expected, even if two members of their anticipated playoff rotation are unavailable. They are Vegas favorites.

But the Clippers are far deeper than the Lakers and better suited to both attack and defend them.

The Clips can guard James in waves, as Leonard, George and Marcus Morris have proven among the league’s three most capable players at slowing an otherwise unstoppable force in the playoffs. Montrezl Harrell will get the bulk of work opposite Davis. JaMychal Green and Patrick Patterson can also share the workload against both Lakers stars with the four aforementioned defensive stalwarts.

But the dam breaks beyond that. What resources go toward Lou Williams, arguably the best third option in the league offensively? His pick-and-roll partnership with Harrell is among the league’s most prolific, and that will draw defensive attention from Davis and a roaming James. Reggie Jackson on the end of the bench might be better than any of the Lakers’ secondary playmakers. You could counter with Alex Caruso, but we are getting in the weeds of a much clearer landscape.

The Clips have the horses to challenge both Lakers superstars, disrupt lobs to Dwight Howard and JaVale McGee, and stay at home with Caldwell-Pope and Green, the only two above-average shooters on the roster. Landry Shamet, Patrick Beverley, Leonard, George, Williams, Morris, Green, Jackson and Patterson are each shooting better than league average on 3-pointers this season, all in
terlocking in an endless list of lineup combinations to optimize offense or defense. Clippers coach Doc Rivers can also sprinkle in Ivica Zubac or Joakim Noah if Howard gives them trouble.

The Lakers did break through against the Clippers in their third meeting of this season, two games before the NBA suspended its season. James and Davis combined for 58 points, 15 rebounds, 11 assists, three blocks and two steals, yet they still required a season-high 24-point effort from Avery Bradley, who opted out of the restart. An 0-for-9 effort from Marcus Morris was similarly flukey.

Clippers wins on opening night and Christmas Day seem truer to form, even if Morris was not around for either and George missed the opener. James and Davis got theirs, albeit not as efficiently as they are accustomed to, and the rest of the Lakers’ rotation failed to match the Clippers’ depth, especially offensively — despite respective 20-plus-point explosions from Green and Kuzma.

The magic number for all three wins between the two teams this season was 110 points. Give the two superstar tandems between 50 and 60 points combined per game. Where are the other 50-60 points coming from on the Lakers, especially without Rondo’s playmaking and Bradley’s shooting? Can you even count on Kuzma, Caldwell-Pope, Green, Howard, McGee, Caruso and Markieff Morris to counter Williams, Harrell and Marcus Morris, much less the remaining weapons over a seven-game set?

It is inarguable that the NBA’s hiatus has been beneficial for the Clippers and detrimental to the Lakers. The Clips get an extra training camp to incorporate Morris into the rotation, and the massive disadvantage that playing a road conference finals at Staples Center would have been is erased in the bubble. Meanwhile, Bradley prioritized his family’s health over joining his team in Orlando, Rondo broke his thumb, and the Lakers’ efforts to secure home-court advantage were for naught.

We can break this down into even simpler terms. Statistically speaking, the Clippers have no holes defensively, and the Lakers are vulnerable both in the corners and the mid-range. The Lakers are better at scoring in the restricted area, and the Clips shoot better everywhere else. There is a world where dominating the rim results in four wins, but when every playoff bucket is harder to come by, I would wager on the more skilled team, regardless of what projections and oddsmakers might say.

In One Chart: Look out below! Warren Buffett just dropped to his lowest ranking ever…

9 Ways I Extend the Shelf Life of My Food Stockpile

NewsWatch: The omicron panic is overdone. Buy the dips in these stocks, says…