Improved weather conditions are offering some hope to weary firefighters battling massive wildfires on the United States West Coast, authorities said, but hundreds of thousands of people in the state of Oregon remain under an evacuation alert.

Oregon Governor Kate Brown said on Friday more than 40,000 people had been evacuated from their homes since the fires began, while nearly 500,000 residents were under three different evacuation alert levels.

The state advised some residents to pack and be vigilant, some to be ready to flee at a moment’s notice, and others to leave their homes immediately, Reuters news agency said.

Evacuees have sought refuge in “shopping mall parking lots, fraternal lodges and at the Oregon Convention Center” in the heart of Portland, the state’s largest city, local news outlet The Oregonian reported, while some families are camping out in RVs.

Oregon’s top emergency official had warned that authorities are preparing for a “mass fatality event”, as dozens of people have been reported missing since the blazes broke out. 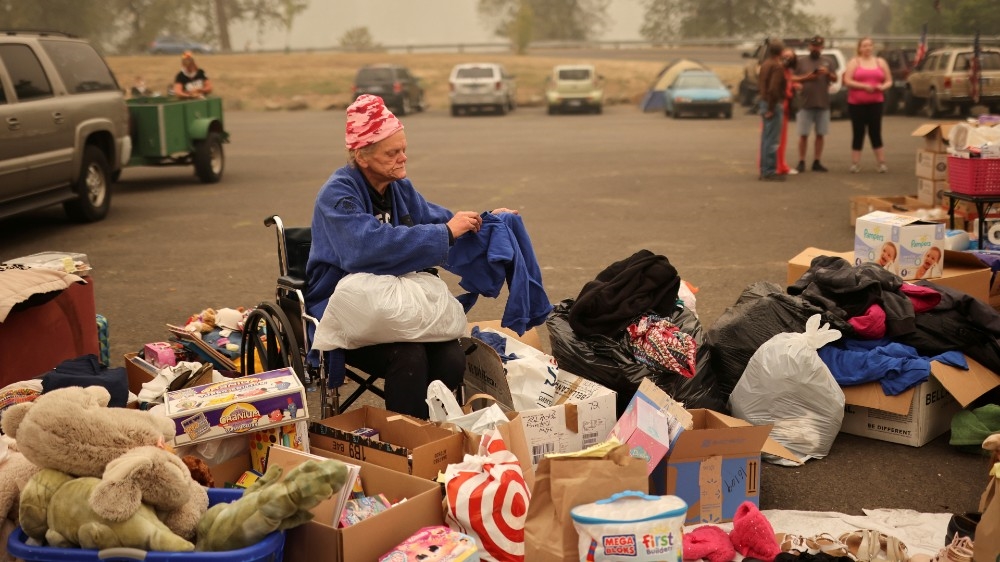 Oregon Governor Kate Brown said on Friday 40,000 people had been forced to flee their homes due to the deadly wildfires [Carlos Barria/Reuters]

Authorities said calmer winds blowing in from the ocean – bringing in cooler, moister conditions – have helped emergency crews respond to the wildfires in both states.

On Saturday morning, the US Fire Service for Mt Hood National Forest, about 32km (20 miles) east of Portland, Oregon, said “a persistent smoke layer” would limit the weather effects on fires in the area.

The local weather service said people should remain vigilant though a dense fog or dense smoke advisory is in place and is making visibility difficult.

The wildfires on the US West Coast over the past weeks have destroyed thousands of homes, sent massive plumes of smoke into the air, covered the landscape with ash and blanketed the sky in parts of California in an ominous, orange hue.

The fires are some of the largest in California and Oregon history, the AP reported, and experts say increasingly dry conditions linked to climate change have contributed to the intensity and spread of the blazes.

Authorities in Oregon and California said they fear that the receding flames could reveal many more dead across the blackened landscape.

Speaking to reporters on Friday, California Governor Gavin Newsom said the impact of climate change on the fires could not be denied.

On Saturday, a White House spokesman said US President Donald Trump would visit California on Monday to be briefed on the wildfires.

Trump’s Democratic presidential challenger, former Vice President Joe Biden, said in a statement Saturday that the wildfires show there is “no challenge more consequential to our future than meeting and defeating the onrushing climate crisis”.

iOS 14: How to Change the Default Browser on iPhone

Sovan Chatterjee in house arrest after release from hospital

: Asymptomatic children who contract COVID-19 may ‘shed’ coronavirus for weeks

Haiti, Suriname, and Yemen fact of the day

U.S. lifts Sudan’s designation as a state sponsor of terrorism

How-to: Bring an old Mac back to life by installing Chrome OS on it for free