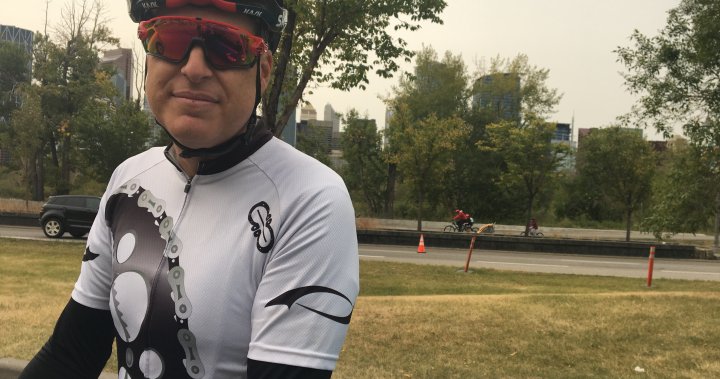 Calgary’s Memorial Drive has been a popular spot for people to run, bike, skate and hop on a scooter since the end of March.

That’s when the city shut down part of the roadway so that people could maintain physical distancing.

“It’s been great having those extra two lanes to keep people spaced out and keep people safe downtown,” said Rob Wowryk, who lives in Cochrane and goes to Calgary to run on Memorial Drive.

“I think with the reduction in traffic in general on Memorial Drive over the last five or six months, it has probably worked well for everybody. It’s probably a bit of a pain for motorists during key times of the day but I think in general we have coped well and I think there is room for everybody on the road here.”

But the lane closures came to an end at the beginning of September — at least partly. Two lanes of Memorial Drive and the lower deck of the Centre Street Bridge are still closed to vehicle traffic but only on weekends.

Now Bike Calgary is asking city council to consider making some of the adaptive roadways that were introduced at the start of the pandemic permanent or at least implemented on weekends.

“I think we have more access to our local spaces now than we have ever had before just by the city opening up these lanes. It’s new. It’s different. People want to continue to enjoy it,” said Bike Calgary director Pete Spearing on Sunday.

Spearing has sent a letter to council asking for a review of the information gained since March to make changes to how infrastructure can be shared and maximized. He said some of the lane closures like the one on Elbow Drive actually complete missing links in the pathway system.

“We understand there are certain times where we are not going to say, ‘Let’s take a major artery and turn it into a cycle lane or shared street.’ We have to be realistic. We are being realistic in what we are advocating for. That’s why we are looking at each and every different circumstance because they are all different,” Spearing said.

The city hasn’t publicized the locations of the adaptive roadways.

In total, adaptive roadways were used at 18 locations in Calgary with a total length of more than 13 kilometres.

“I think it’s great even more so on weekends because the traffic is that much less on the weekends. I actually drive into Calgary from Cochrane to run because I enjoy running down here so I battle the traffic going both ways and I don’t mind it,” Wowryk said.

The city has been gathering data on all of the adaptive roadways since they were put in place. Some routes that were not well used were removed while others will stay in place until snow and ice removal starts.

“We are just asking the city to take a review and advise the relevant departments and say, ‘Let’s not wait until the first snow and then transition completely back.’ Calgarians use these facilities year-round. So I think we need to stop and think about how we can best benefit from what has been an awful pandemic,” Spearing said.

Ward 9 Coun. Gian-Carlo Carra said that he is supportive of letting data drive how the city allots road space to different modes.

“I think there is a really thoughtful conversation taking place about making Memorial Drive at least a weekend thing for now and maybe more permanent in the future if the data holds it up,” Carra said on Sunday.

“Bike Calgary is acknowledging this historic moment, one of the silver linings of COVID, and they are saying let’s examine the data and that’s exactly what we should be doing. We should let the data speak. I think there are going to be some of these things which are ephemeral. They come and they go on the weekend, they come and go seasonally, and I think some of them are going to become permanent over time.”

Carra is optimistic there could be some federal cash to help Calgary create more space for cyclists and pedestrians.

“There is a federal fund that has come out that is looking at supporting active modes. Calgary could be getting a sizeable chunk of that money,” Carra said.

Miranda: A Live Steampunk VR Opera Where You Play As Judge & Jury

Lange disaster: Smith must be fuming over £19m dud who “upsets the balance” at AVFC –…

City of Winnipeg should get ‘immediate access’ to Caspian documents seized in raid:…

The US lifts Coronavirus Travel Advisory

How Can You Escape Binary Thinking? (NSQ Ep. 67)

Half of Pediatricians Dismiss Anti-Vaccine Families

Biden a Tragic Prisoner of His Own Paradoxes

Migrating Jupiter May Have Made Venus Uninhabitable Long Ago