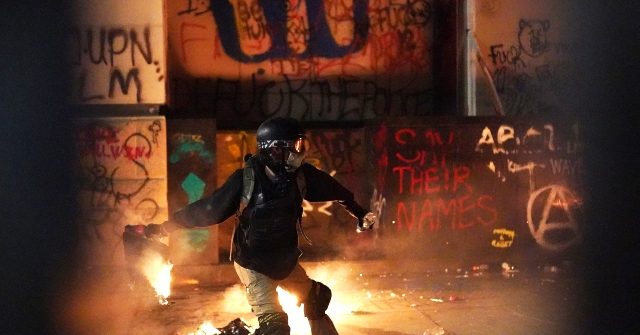 It should be apparent to anyone paying attention — and even the corporate media can’t hide it anymore — that we are living through an era of revolutionary terror.

Dozens of people have been killed due to the riots that have swept through American cities over the past few months (the “fiery but mostly peaceful protests,” by CNN’s definition).

The victims include retired police sergeant David Dorn, murdered by looters in St. Louis, 19-year old Lorenzo Anderson, killed by militants in the Capitol Hill Organized Protest (CHOP) in Seattle, and, most recently, a member of the pro-Trump Patriot Prayer group during clashes with violent leftists in Portland.

Beyond the murders and street assaults, law-abiding citizens are terrorized with the destruction of their private property. Terrified business owners put up signs in their windows declaring allegiance to the cause, hoping that the rabid mob will spare them. The mob often doesn’t.

The luckier citizens aren’t looted, vandalized, assaulted, or killed, but merely canceled — banned from the digital public square, which is monopolized by woke tech giants, or fired from their jobs for insufficiently virtuous opinions. Even allegedly Republican governor Larry Hogan plays along, firing a staffer for defending Kyle Rittenhouse.

There’s no redemption for the falsely accused. How many people were fired for not bowing down to Black Lives Matter after the death of George Floyd? How many were given their jobs back after additional footage was released in early August showing Floyd, under the influence of drugs, resisting arrest?

The terror takes place at every level of society.

It occurs in the streets.

It occurs in politics, where even so-called conservatives kowtow to the mob.

It occurs in the workplace, where those born too late to join the Stasi can instead become diversity consultants or join the department of human resources.

It even occurs in West Point and other areas of the U.S. military, which now teach recruits how to unlearn their “covert white supremacy” and “toxic masculinity.”

Like virtually all terrors in history, it comes with iconoclasm. This society is corrupt, say the revolutionaries, so its symbols must be torn down.

First the memorials to Confederate history, and then everything else too — Christopher Columbus statues, George Washington statues, and, if they get their way, Mount Rushmore also.

Standing for the anthem must be replaced with kneeling. History textbooks must be rewritten by activists, regardless of what the historians may say about it.

Our understanding of gender is oppressive, and our language is too. The gendered bathrooms must go, and so too must the gendered pronouns. All must be rewritten to appease the new orthodoxy.

Our legal system is built on white supremacy, therefore any participation in it makes you a white supremacist too. If you report a member of the oppressed minority to the police, even if you suspect them of committing a crime, the media will say you’re complicit in racism.

If you’re a victim of a crime, say the revolutionaries, you should take it on the chin — it’s just “restorative justice,” after all. Looting is just a “strategic resistance tactic” against an unjust system.

This isn’t the first era of revolutionary terror. The Bolsheviks terrorized (and massacred) the Kulaks and other political dissidents, and, of course, the French revolutionaries terrorized the nobility and its suspected sympathizers. After purging these threats, the revolutionaries moved on to the inevitable stage of terrorizing each other, for the crime of insufficient ideological purity.

The Bolshevik terror was called the “Red Terror” — red for socialism. The French terror, the seminal example, was simply “the terror.”

We are now living through a Woke Terror, instigated by far-left radicals who riot on the streets, and abetted by Democrat officials who march alongside the rioters, let violent anarchists and looters out of jail, refuse to use the National Guard, and irresponsibly parrot the far-left’s inflammatory conspiracy theories about “systemic racism” in the police force.

You can see some nods to the revolutions of old from today’s street anarchists — a guillotine outside the White House, a guillotine outside Jeff Bezos’ residence — but the similarities end there. This is not a revolution of peasants and bourgeoisie overthrowing ruling elites (that’s more like what the Trump movement is doing), and while the modern-day revolutionaries may dislike billionaires like Bezos, cutting them down to size is not really the priority.

No, this is a terror driven by the “intersectional” left, whose chief complaint is not with those who dominate in economics, or politics, but rather those who dominate their imaginary hierarchies of identity. Their beef is not with capitalism or monarchism, but with the white supremacist cisgendered heteronormative patriarchy (their street thugs mostly just call it “white supremacy” — it’s snappier).

According to the intersectionalists, most of modern-day western society, its norms, laws, institutions, and behaviors, is a result of white supremacist cisgendered heteronormative patriarchy. It must therefore be torn down, so that a new, purer society may be built on top of it.

Race is their most immediate concern, but a brief glance at the Black Lives Matter website reveals a far more extensive agenda — from making space for “transgender brothers and sisters to participate and lead,” to dismantling “patriarchal practice[s],” to disrupting “the Western-prescribed nuclear family structure.”

Oh, and defund the police too. Of course.

Let no conservative ever be so flippant as to mock these people as meek little “snowflakes” ever again. The “snowflakes” of college campuses have graduated to social justice warriors.

Warriors — complete with the pillaging and looting of towns and the murdering of peaceful citizens.

They are not snowflakes. They are footsoldiers in a dangerous, extremist movement that has already engulfed multiple American cities in a bloodbath of chaos, vigilantism, and street battles. They left their safe spaces, and are now destroying yours.

And what of the Republican sympathizers to the rainbow terror? People like Larry Hogan, who fired his staffer for praising Kyle Rittenhouse, or Nikki Haley, who said George Floyd’s death must be made to be “personal and painful” for all Americans?

Every revolution has its “useful idiots,” seemingly on the opposite side, who in fact support and enable the purveyors of terror. Some of these people genuinely believe that pandering to the mob will secure the party’s future, as if all that’s needed to win over wavering minority voters is just a little more criminal justice reform.

As Pedro Gonzalez, an editor at American Greatness pointed out, this approach carries the implicit assumption that minorities don’t want law & order. Isn’t that a racist assumption?

Implicit in the GOP/conservative “let’s be the real anti-racist party” line is that there are not enough nonwhites who support things like law and order, therefore, we need to soften our message… which is… well 1/

Trump’s support among black and hispanic voters is surging at a time when the President is projecting a tougher law-and-order image than at any prior moment in his presidency.

This certainly suggests that large numbers of minorities, much like other Americans, don’t like their cities falling into violence and lawlessness. What a shocker!

But what to do with the Republicans who have drunk the intersectional kool-aid?

It would be unseemly and unwise for a party to fight with its own prominent members this close to an election, but that doesn’t mean Republican elites can’t apply backroom pressure.

Those endorsements you promised — threaten to withdraw them. Appointment to a top administration job? Another year, perhaps. The president’s backing in your next primary contest? Maybe that’s no longer such a sure thing.

Remember, these status-chasers value their careers above all else — threaten those and they’ll quickly fall in line.

Cowardice is endemic to modern politics, but if the Republican party must have cowards, let them fear the party more than they fear the woke mob.

President Trump has done more than any other Republican to challenge the woke mob. His Mount Rushmore speech was a comprehensive rebuttal to the intersectional creed of pathological guilt that tells Americans that their history and their culture is something to be ashamed of.

That speech also brought the term “cancel culture” to the forefront of Republican talking points — now it seems that every Republican (even Nikki Haley!) is talking about it.

“Cancel culture,” of course, is just another word for what the cultural Marxist Herbert Marcuse called “repressive tolerance” — the Orwellian idea that true tolerance comes from suppressing the intolerant (by which they mean conservatives!). It is central to the ideology of the intersectional left, and always has been.

By putting “cancel culture” in the spotlight, Trump leads his party against the cultural left, instead of yet again beating the dead horses of economic and foreign policy leftism.

Under President Trump, the administration is also tackling the virulent racism of the cultural left. This is the racism that brands Dr.Martin Luther King Jr.’s ideal of colorblindness as a sign of “white supremacy,” and sees Democrat city councils send white staff members to segregated training sessions aimed at “undoing their whiteness.”

It was announced on Friday that Russel Vought, director of the White House office of Management and Budget, will eliminate any executive branch training session or material that makes use of “critical race theory.”

The days of taxpayer funded indoctrination trainings that sow division and racism are over. Under the direction of @POTUS we are directing agencies to halt critical race theory trainings immediately.https://t.co/dyMeJka9rt

Here is a key section of the OMB’s memo:

Most Americans — black, white, asian, or hispanic — don’t like racism. It’s only elites in the media, higher education, and the Democrat party who seem to think that demonizing people for the color of their skin is acceptable.

Americans are crying out for an end to the racist, violent, intolerant Woke Terror — and a positive vision of America to replace it.

Whoever successfully seizes this moment will win the future of American politics.

Allum Bokhari is the senior technology correspondent at Breitbart News. His upcoming book, #DELETED: Big Tech’s Battle to Erase the Trump Movement and Steal The Election, which contains exclusive interviews with sources inside Google, Facebook, and other tech companies,  will be released on September 22 and is currently available for preorder.

A weird long cloud on Mars has returned. It’s right on schedule, scientists…

How to paste text without formatting on a Mac