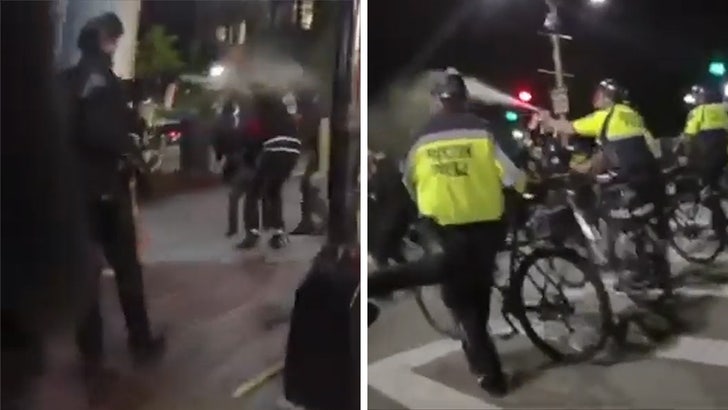 Some Boston cops were excited about pepper spraying people protesting police brutality … unloading on them almost like warriors … and it was apparent, some of them were nervous that bodycams were recording their actions and their words.

The incident went down in June, in the wake of George Floyd’s death.  Protesters were in the Boston Commons area, where cops attempted to disperse the crowd.

You see and hear a cop armed with pepper spray saying, “I got a little left.  I wanna hit this asshole.”

Shortly thereafter, you see a demonstrator with hands up, but a cop levels the protester with a billy club to the chest.

You hear other cops say, “Start spraying the f*****rs.”  There was even talk among the cops of using vehicles as weapons.

At the beginning of the video, you hear one of the cops say “I’m f***ing hitting people with the car,” and then a fellow cop whose bodycam is recording the conversation, quickly and nervously walks away and then announces, “This thing is on.”  Then the story changes and the cop says “I didn’t hit anybody.”

The bodycam video, which was just released, has triggered an internal affairs investigation.

The Undertaker is Now Available in WWE 2K Battlegrounds

Covid US: Alaska has vaccinated over half of its residents over 16

The Washington football team will call itself the ‘Washington Football…

Patient in Nevada Marks The First US Case of Coronavirus Reinfection, Study Says

How to turn web pages into PDFs with Puppeteer and NodeJS

Imagine him & Soro: Hammond can revive Celtic with swoop for £8.5k-p/w tank…