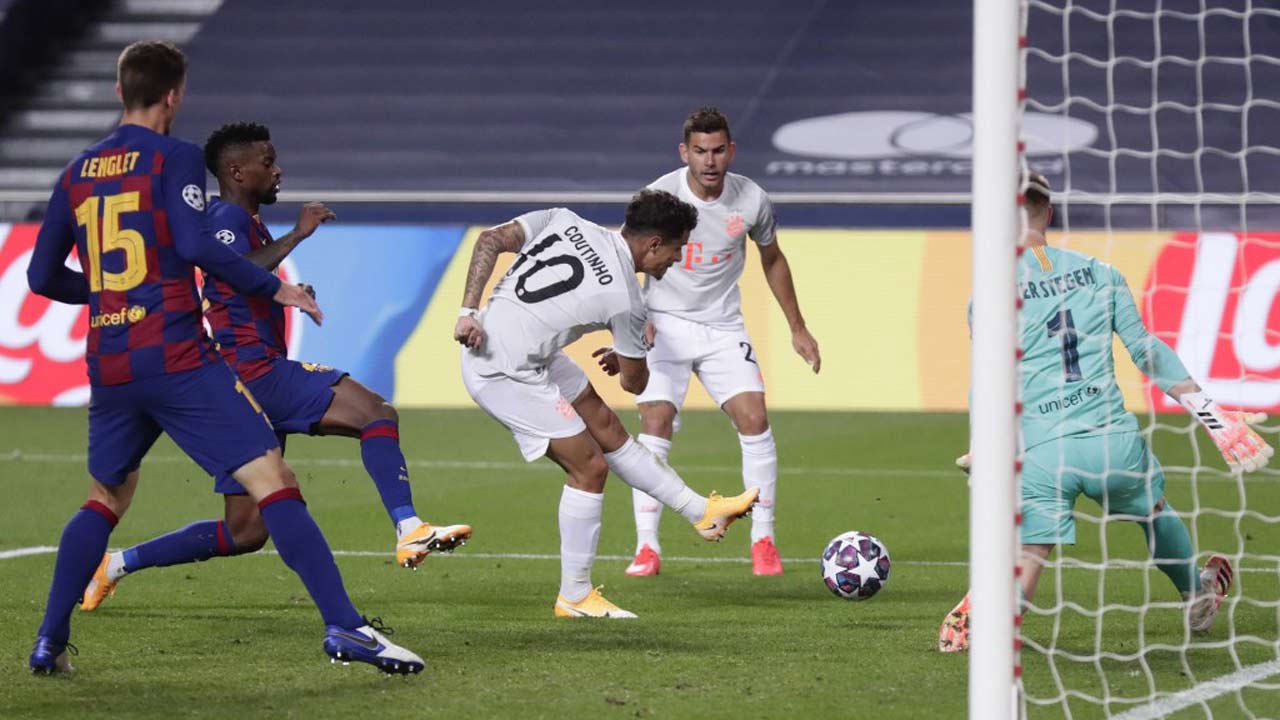 A merciless Bayern Munich inflicted a humiliating, record defeat on Barcelona on Friday, recording a scarcely believable 8-2 victory in their Champions League quarter-final in Lisbon to leave Lionel Messi forlorn and surely hastening in the end of an era in Catalonia.

Thomas Mueller scored twice either side of goals from Ivan Perisic and Serge Gnabry in a stunning opening 31 minutes at an empty Estadio da Luz, with a David Alaba own-goal having briefly brought Barcelona back level.

Luis Suarez pulled it back to 4-2 at one point in the second half, but Barcelona then caved in, with Joshua Kimmich getting Bayern’s fifth before three more goals in the final stages, one for the prolific Robert Lewandowski and two for substitute Philippe Coutinho.

That was the really humiliating part for the beaten side, with Coutinho on loan in Bavaria from Barcelona, who spent huge money on signing the Brazilian in 2018.

The game was eerily reminiscent of Germany’s 7-1 destruction of Brazil in the 2014 World Cup, a game in which Mueller also played and scored.

Germany went on to win that World Cup and Bayern look a good bet to win this Champions League, although they will surely face a sterner test in the semi-final regardless of whether it is against Manchester City or Lyon.

This was their 19th consecutive victory in all competitions, and a 28th game unbeaten for Hansi Flick’s side. They have now scored 39 goals in nine Champions League outings this season.

End of an era
But the story of this game is Barcelona’s remarkable capitulation and the question is what happens to them now.

Messi was 27 when they last won the Champions League in 2015. He is 33 now and this game may make up his mind that he needs to finally leave the Camp Nou if he is to win it again.

Barca have just about been here before: They were torn apart by Bayern in the 2013 semi-finals, losing 7-0 on aggregate, but this was eight goals in 90 minutes.

And with an ageing team featuring six players aged 31 or older, this has to be the end of an era.

Coach Quique Setien will not survive. His team, having already come second to Real Madrid in La Liga, simply could not cope with Bayern’s pressing.

Bayern went ahead in the fourth minute as Mueller controlled a ball in from the left by Perisic and played a one-two with Lewandowski to scuff a shot low past compatriot Marc-Andre ter Stegen.

They did leave themselves open at the back and parity was restored when Alaba, in attempting to stop a Jordi Alba cross, sliced the ball over Manuel Neuer and into his own net.

For a very brief spell Barca were even on top, as Neuer was forced into a key save from Suarez and a Messi cross came back off the far upright.

But Bayern, suffocating their opponents with their pressing, went back in front midway through the first half. Gnabry won back possession on the edge of the final third before feeding Perisic, who fired past Ter Stegen and into the far corner.

That was the first of three goals in a 10-minute spell.

Leon Goretzka’s deft touch over the top took out Clement Lenglet and Gnabry drilled home to make it 3-1. Then Mueller stole in front of Lenglet to turn in Kimmich’s delivery from the right for 4-1.

Suarez briefly gave Barca something to cling to as he controlled Alba’s ball in from the left, bodyswerved away from Jerome Boateng and fired home.

Yet there would be no comeback, as Kimmich converted Bayern’s fifth following a remarkable assist by Alphonso Davies, and then Lewandowski headed in Coutinho’s cross to make it six.

As Barcelona collapsed, Coutinho made it seven in the 85th minute at the end of a move started when Messi was robbed of possession and then had time to score another in the 88th minute.

Dr. Fauci: ‘No Reason Why We Shouldn’t Be Able to Vote, in Person or Otherwise’

Study demonstrates the possibilities of a future speech prosthesis for humans —…

This bond expert called the initial spike in interest rates. He now says a new…

If McConnell Gives In to Trump’s Demands, Trump Will Own Him

What channel is Steelers vs. Bengals on today? Schedule, time for ‘Monday Night…

A Make-or-Break Moment for American Democracy