Cam Newton gets into heated scuffle with Dolphins after Patriots’ win 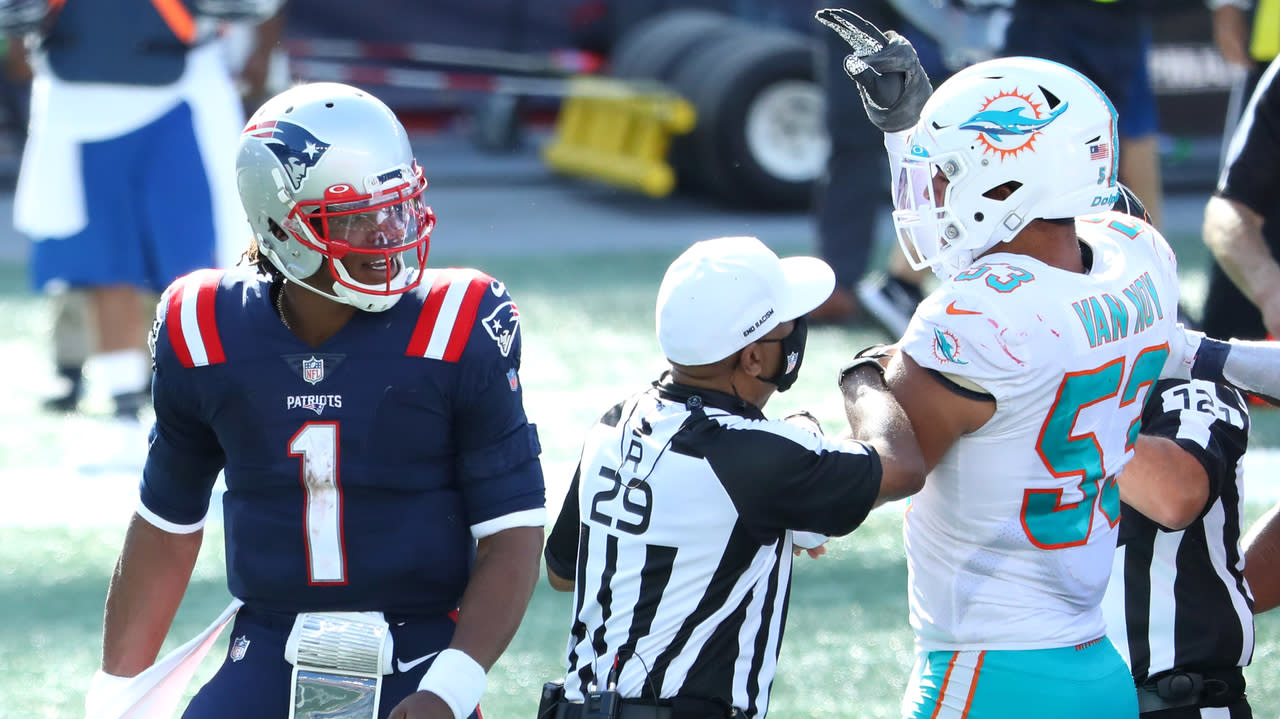 Cam Newton had every reason to smile Sunday after leading the Patriots to a win over the Miami Dolphins in his New England debut.

Instead, the Patriots quarterback was heated after the final whistle, getting into it with Dolphins linebackers (and former Patriots) Kyle Van Noy and Elandon Roberts in a tense sequence.

As NFL Media’s Mike Giardi observed, Newton may have been set off by Van Noy bumping him on the final play of New England’s 21-11 victory.

So Cam Newton was hot at the end of the game. Appears Kyle Van Noy gave him a little shove at the tail end of the game’s final play. @nflnetwork #Patriots #Dolphins pic.twitter.com/SNkJbA4Uhm

Newton then exchanged words with Roberts before the two had to be separated by their teammates. The 31-year-old continued to jaw at Dolphins players as his Patriots teammates tried to get him off the field.

then it’s Elandon Roberts who gets in Cam’s space. pic.twitter.com/6YIGIq23BX

a number of #Patriots players can in between Cam and the #Dolphins. This continued for a couple minutes. We’ll try to get Cam’s thoughts on this postgame. pic.twitter.com/3GmVxRUCCt

Newton also may have been irked by a Dolphins player who appeared to snatch the QB’s chain from his neck during the fracas.

A more concerning development for Patriots fans is that Newton appeared grab his left hamstring as he made his way toward New England’s locker room.

And keep an eye on this. Newton grabs his left hamstring. He did that at several points over the course of the game. #Patriots @nflnetwork @AroundTheNFL pic.twitter.com/EJnanPdF3H

Newton is set to speak to reporters after the game, so perhaps he’ll shed some light on what went down here.

Check out what he had to say here.

Oracle Reportedly Agrees Deal for TikTok’s US Operations, But Chinese Media Cast Doubt on Any Sale

Priyanka Chopra Jonas all excited for Nick Jonas next

China Says US Allegations On Threat To Democracy “Hodgepodge Of Lies”

Tech stocks that soared during pandemic are far from played out, says $9.5 billion…

The predictions of DeepMind’s latest AI could revolutionise medicine

India Permits entry of OCI Card Holders from the UK, US, France and Germany