Can Nuggets pull off another playoff shocker? 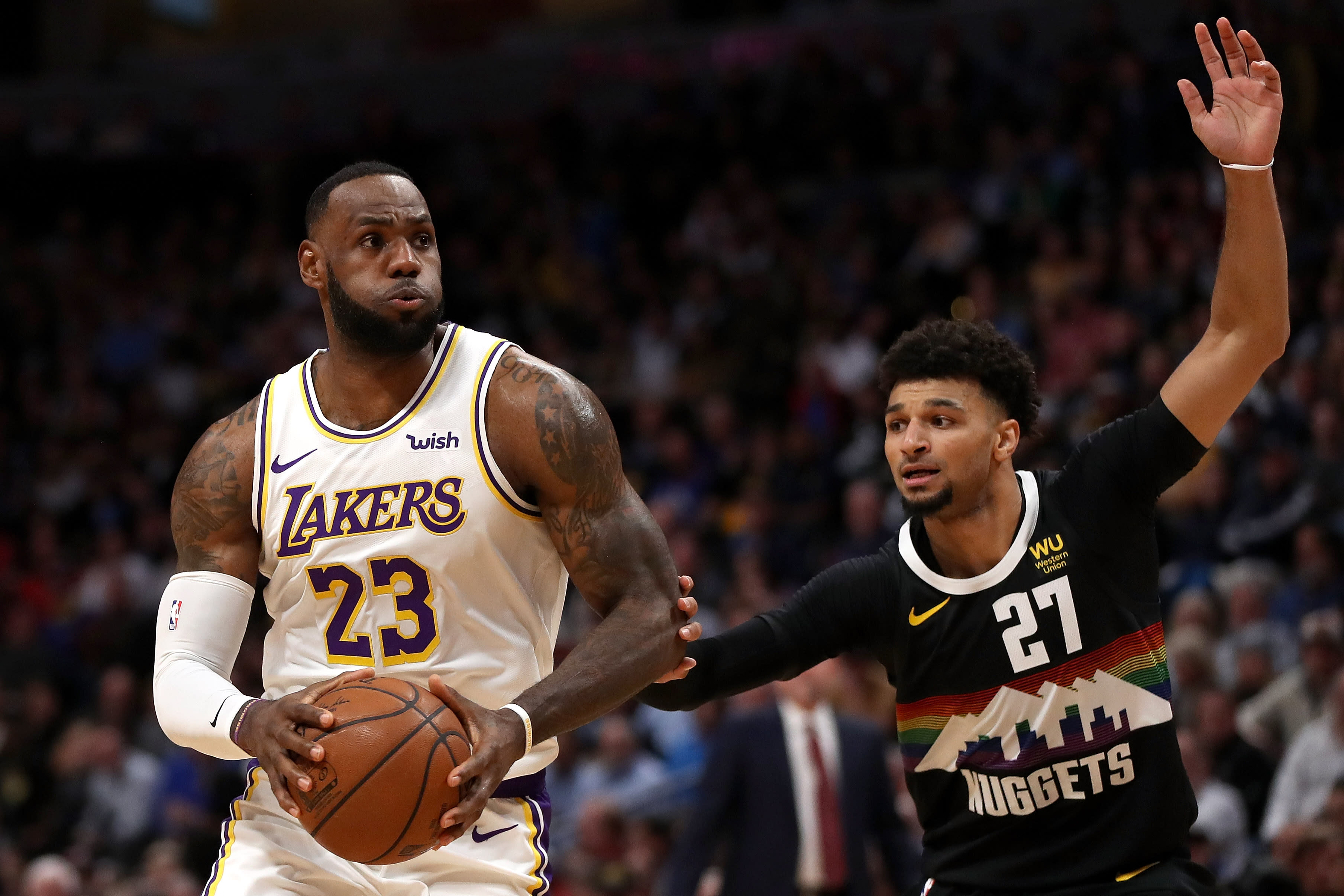 How they got here

After failing to make the playoffs for the sixth straight season, the Lakers mortgaged their future to win the Anthony Davis sweepstakes, delivering LeBron James arguably the most talented teammate of his career. A swing for Kawhi Leonard in free agency missed, so Lakers general manager Rob Pelinka patched together a hodgepodge of veterans who have complemented the two stars to wide-varying degrees of success.

Attempts to secure more depth at the trade deadline and on the buyout market yielded no results beyond the addition of Markieff Morris, whose insertion into the starting lineup helped the Lakers blow the doors off the Rockets in the conference semifinals. None of the roster-building shortcomings have mattered, because it turns out all the Lakers really ever really needed was James and Davis — and the occasional contribution from one or more of role players Danny Green, Kyle Kuzma, Rajon Rondo and Kentavious Caldwell-Pope.

The Lakers cemented themselves as championship contenders with the West’s best record and back-to-back wins against the Milwaukee Bucks and Los Angeles Clippers just before the season was suspended. When play resumed in the Orlando bubble, the Lakers came out slow enough for James to reference off-the-court issues related to the team. Those, too, have yet to slow the Lakers, partly because they faced a worn-out Blazers team and a Rockets team that quit in the first two rounds of the playoffs, but mostly because James is the greatest player of this generation and a model of consistency in his 17th season.

After coming within two possessions of last year’s conference finals, the Nuggets rode the same deep core, along with underrated newcomer Jerami Grant. They again cemented themselves as one of the West’s most formidable rosters, despite questions about the rotation’s high-end talent beyond star center Nikola Jokic.

Jamal Murray has more than answered those questions in the playoffs, registering four 40-point games during a pair of seven-game series, both of which required 3-1 comebacks. The two-man game between Jokic and Murray has been remarkable to watch, exceeded only by the resiliency it has taken to survive the first two rounds of the playoffs, including double-digit deficits in Games 5, 6 and 7 against the Clippers.

Along the way, the Nuggets shed some of their depth, trading Malik Beasley and Juan Hernangomez for a first-round draft pick at the deadline, tightening the rotation and making room for the development of rookie Michael Porter Jr., who averaged 22 points during the seeding games. His emergence helped Denver secure the third seed despite injuries to Will Barton (knee) and Gary Harris (hip). Harris returned late in the Nuggets’ first-round comeback against the Utah Jazz, but Barton continues to rehab outside the bubble.

It all adds up to a battle-tested team that replaced doubt with the certainty that Jokic and Murray belong on a list of the game’s most dangerous duos, bolstered by an equally unheralded depth chart that just thoroughly embarrassed the NBA’s most talented roster in the second round. The opportunity to earn that respect now comes with the increase in viewership that follows James and the Lakers into the West finals.

The Lakers won their regular-season series, 3-1. LeBron James did not play in their lone loss to the Nuggets, a late-December blowout in which Denver countered Davis’ brilliance with a balanced attack.

The Lakers won their lone meeting in the bubble, requiring a last-second Kuzma three-pointer to break a 121-121 tie against a Nuggets team that was down Harris and keeping its starters on a minutes restriction.

Their overtime game just before the All-Star break may be most indicative of what we can expect in this series, as James and Davis out-executed Denver’s stars down the stretch. They averaged a combined 58 points, 15.6 rebounds and 14 assists against the Nuggets this season, as opposed to the 34.8 points, 9.6 rebounds and 11.6 assists Jokic and Murray averaged against L.A. in their four meetings. So long as Denver’s depth proves more productive, James and Davis must maintain that same margin of dominance.

The Lakers started JaVale McGee at center alongside Davis throughout the regular season, adjusting only when Houston’s small-ball lineups forced Davis to center and Morris into the fold — a switch that seemed like a better option all along. Lakers coach Frank Vogel suggested they would “return to form” against Denver, playing centers McGee and Dwight Howard more often, but he did not commit to starting a starting lineup opposite Jokic and Paul Millsap — two bruising bigs whose ability to shoot creates matchup issues.

Obviously, James and Davis will be on the floor when Game 1 opens. Green and Caldwell-Pope have been the other two mainstays in a starting lineup that lost Avery Bradley, a defensive stalwart who opted out of the restart. Morris played only 18 minutes of the Lakers’ final regular-season meeting with the Nuggets, none of which came with the regular starters. The quintet of James, Davis, Green, Caldwell-Pope and McGee was outscored by 19.4 points per 100 possessions in 14 regular-season minutes against Denver.

Injuries and matchups have led Denver coach Mike Malone to shuffle his starting wings around Murray, Jokic and Millsap. The Nuggets swapped Torrey Craig’s defense for Grant’s two-way impact midway through the Utah series, and Harris recaptured the fifth and final spot upon returning from his hip injury.

Since that lineup outscored the Clippers by a combined 20 points over 59 minutes in the final three games of the conference semifinals, Malone is likely to ride the same starters. Murray, Jokic, Millsap, Harris and Grant played only two minutes together in one game against the Lakers this season, playing them to a standstill. Craig and Porter are the respective defensive and offensive adjustments if the lineup gets stale.

Jokic was the best player on the floor in a Game 7 against Leonard, cementing himself as the most impactful center in the league — a title that may belong to Davis if he did not prefer playing power forward. Regardless of how often Vogel fields McGee and Howard, there is no doubt we will see Jokic and Davis go head-to-head in a contrast of styles often in this series, especially in the closing minutes of tight games.

Jokic is a plodding 7-footer whose unique ability to both score and create from the post to the three-point line requires constant attention. He relies mainly on his basketball IQ to thwart opponents defensively, but Davis’ combination of athleticism and skill is a matchup that requires more than just thinking. Davis torched the Nuggets this season, almost doubling Jokic’s scoring output. In roughly 10 minutes of the two players defending each other during the regular season, Davis outscored Jokic 26-12 and the Lakers were plus-15.

We have seen Jokic elevate his game in the playoffs, and his passing has been sublime when double-teamed, but the Nuggets are in for trouble if Davis continues to dominate their one-on-one matchup.

Nobody has been able to stop James. The responsibility of containing him will fall on Grant, Craig and Millsap, who did the bulk of the work against James during the regular season. Millsap gave up 16 points in his five minutes opposite James. Grant did not fare much better, but Craig found some success, limiting James to 4-for-15 shooting over almost nine minutes. That could thrust Craig into the starting lineup.

In a broader sense, James is one series away from the 10th Finals of his career — an astounding accomplishment accentuated by the fact that Denver has never been to a Finals since joining the NBA in 1976. James can surely taste a fourth championship with both the Clippers and Bucks eliminated, and this may well represent his last best shot at matching Shaquille O’Neal on the list of all-timers with four rings.

That James is in this position at age 35 is a testament to his greatness. He is averaging a 27-10-9 on 55/37/72 shooting splits in the playoffs this year, superior production to his last two championship runs, in 2013 and 2016. He is still the most reliable option in the NBA, with a wealth of experience in big games that exceeds the entire Nuggets roster combined. We know what we are going to get with James: Greatness.

Murray is far more mercurial, but he has become remarkably dependable in these playoffs, the difference between falling short of the conference finals a season ago and breaking through this year. He is unafraid of the moment, scoring an efficient 40 points in Game 7 against the Clippers, and every game from here out will be the biggest of his career. How often he can meet the moment will dictate how long this series goes.

The Lakers have already eliminated two of the best backcourts in the league, but they are by no means replete with trustworthy smaller on-ball defenders, and they lack guards who can make Murray pay for his defensive limitations. Their defensive success has been aided by Damian Lillard’s injury, Russell Westbrook’s recklessness and James Harden’s apathy, but Murray has been a different beast entirely.

Bradley drew the majority of minutes defending Murray during the regular season, but Caldwell-Pope and Alex Caruso held up well against the Nuggets star over more than 16 combined minutes, allowing 11 points on eight shots — far better than Green, who Murray torched for 21 points over five minutes. But no Laker has faced this fully realized version of Murray, who enters this series knowing he can dominate a big stage.

How the Lakers can win

James and Davis consistently own the production battle with the opposing stars, and the Lakers find a third scoring option more often than not, whoever it may be. It is the same simple recipe they have ridden so far.

How the Nuggets can win

The two-man game between Jokic and Murray leaves the Lakers scrambling, marginalizing the scoring and playmaking production we know will come from James and Davis, and Denver’s depth takes them home — far from a certainty at this stage. Millsap is their lone role player with an extensive history of playoff experience. Harris, Morris, Grant and Porter (especially so) are all question marks, even if they have emerged unscathed from the trial by fire that has been six elimination games over the previous two rounds.

The purpose of sleep appears to change when we are toddlers

Nurse dismissed pain as cramps during coronavirus shifts, has her leg amputated.

Stimulus Deal: Pelosi Reports Progress as McConnell is Against Proposal

Birth of magnetar seen for the first time

Key Words: Melania Trump mourns those killed in Capitol riot and calls out…

Win a two-night stay at charming London hotel The Kensington