The 5G revolution in the world of smartphones is going at full speed, with China leading the pack both with network deployment and handset availability. According to Canalys, 278 million phones with 5G will be sold in 2020, with 62% of them, or 172 million, in the Greater China market.

Predictions for the market in 2021 sees almost doubling the amount of 5G phones around the world, with all key regions seeing a massive growth in total volume. 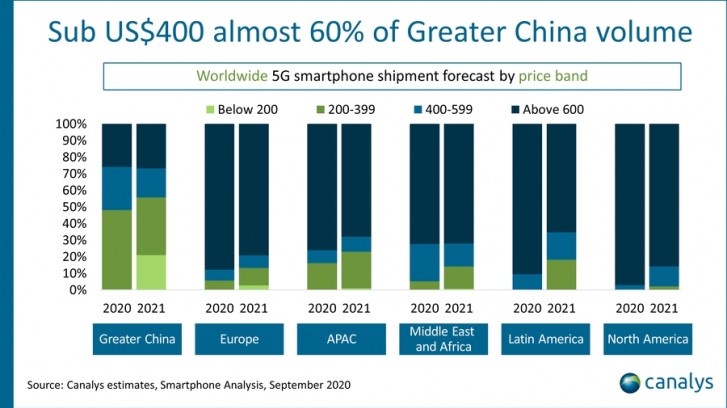 Realme V3 5G arrived on September 1, officially becoming the first 5G phone with a price under $ 150 (retail price in China is CNY999 which today translates to $ 146). According to Shengtao Jin, an analyst at Canalys, this milestone has arrived three months earlier than expected and will cause a significant ripple effect in other regions – Southeast Asia, EMEA, and even Latin America, where smartphone companies from China are expanding.

Makers will keep pushing 5G devices to these markets even if the next-gen network is not fully deployed. This will give them an edge over any eventual competition, especially when Samsung is the only major non-Chinese company launching 5G devices right now.

Huawei is expected to play a major role in 5G smartphone adoption, despite the ongoing uncertainty around the company and its supply chain constraints. Even if it doesn’t manage to deliver, the vacuum it creates will be easily filled by Xiaomi, Oppo, and TCL, commented Ben Stanton, senior analyst at Canalys.

Average sales price of 5G phones in Europe is expected to fall to $ 765 in 2021, and then steadily go down to $ 477 in 2024, mostly because Samsung and Apple are still key players in this market and they have more expensive portfolios than the competition.

Conor Benn – why sons follow fathers to the ring

Beltalowda! Cara Gee opens up about Drummer’s emotional odyssey in ‘The…

Video: A Postcard from Venice

What is holding back employment?

Jordyn Woods Posts A Video Featuring Her Mom And BF – Who Knows Her Better?

5 startup scaling mistakes and how to avoid them

The Mounting Evidence of a New Bitcoin Bull Market