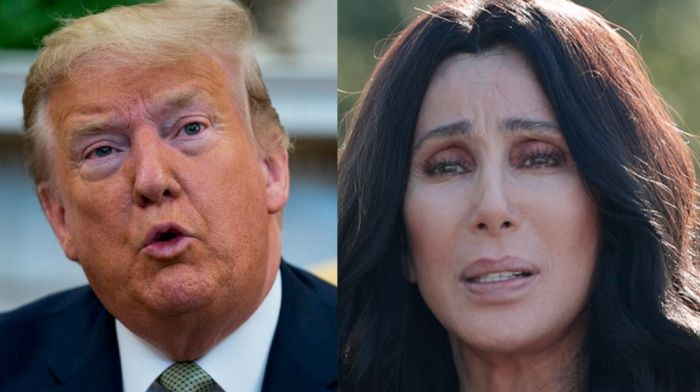 The singer and actress Cher just had yet another deranged meltdown against Donald Trump, this time claiming that he is a “mass murderer” who should be punished by death in a tweet that she has since deleted.

THERE’S A BLAME 4 KILLING SOMEONE…ITS CALLED “MURDER”. IF YOU MURDER MORE THAN ONE PERSON YOU ARE A MASS MURDERER. THERE ARE MANY PUNISHMENTS FOR DIFFERENT DEGREES OF MURDER,BUT WHEN SOMEONE “KNOWINGLY “MURDERS PEOPLE… THE PUNISHMENT IS DEATH. Trump’s a mass murderer… hhmm.

Though she deleted this tweet, Cher continued her rant by asking “why did Trump lie” and admitting that she sometimes goes “too far.” She then said that she would not “fall below my moral compass,” even though she had just publicly suggested that the president be put to death.

RELATED: Cher Snaps As She Accuses Trump Of The ‘Torture And Killing’ Of 160K Americans

Keep Thinking Why Did Trump Lie😳.I Mean,I Know Why He Lied,BUT WHEN 10’S Of Thousands Of Ppl Started Dying
Why Didn’t His Conscience
Kick In & Say To Him…WAIT🛑NOT ONLY ARE U LETTING 💯💯 OF THOUSANDS OF PEOPLE DIE⚰️ THINK OF THE LOVED ONES👧🏽👶🏻👵🏻👩🏻👨🏽‍🦳WHO WILL BE CRUSHED 4EVER

SOMETIMES I GO FAR,SOMETIMES TOO FAR
BUT AFTER READING TRUMP WAS KEEPING 💰FROM 911
FIRST RESPONDERS FUND
IT WAS TOO MUCH😤. HAVING SAID THAT, I CANT FALL BELOW MY MORAL COMPASS..
NO MATTER WHAT🙏🏻 pic.twitter.com/Mm1H5APjp0

“LETS TALK…. I MUST TRY TO BE A BEACON OF LIGHT FOR YOU. OBVIOUSLY DIDNT HEAR MY HIGHER ANGELS Disappointed but relieved face,” Cher continued in her disturbing rant. “I APOLOGIZE.”

LETS TALK…. I MUST TRY TO BE A BEACON OF LIGHT FOR YOU.
OBVIOUSLY DIDNT HEAR MY HIGHER ANGELS😥

“I Feel Ashamed,” Cher added, giving no reason for her shame. “SHAME IS IMPORTANT.”

I Feel Ashamed
SHAME IS IMPORTANT

This is far from the that Cher has launched such a deranged attack on Trump. She has spent the past few months blaming him for American coronavirus deaths.

“trump Cares Nothing About Our Vets,Our Country,Ppl Who Are Dying of Covid,Ppl From Black Lives Matter,Kids He Keeps [locked] In Cages,Nurses,& Drs Who Are Dying Because He Wont Protect Them,HE KILLS AMERICANS WITHOUT A THOUGHT,HE KILLS 4 ADULATION AT RALLIES,” she tweeted back in July.

Cher claims to be all about tolerance and love, yet she has one of the worst cases of Trump derangement syndrome in Hollywood. We can only imagine how unhinged the singer will become after November, when Trump wins reelection and is given four more years in the White House.

READ NEXT: Cher Pushes Bizarre Conspiracy: Suggests Trump ‘Only Wants To Save Whites And White Supremacists’ From Coronavirus

This piece was written by PopZette Staff on September 13, 2020. It originally appeared in LifeZette and is used by permission.

Mobile World Congress 2021 Delayed From March to June (for Now)

RIP, smooth handfish. You were weird, and now you’re extinct.

Smart home guide for beginners: Make your home more convenient to live in without…

Opening Schools Is Common Sense & the Right Thing to Do

Pew: Majority of Young Americans Live with Parents for First Time Since Great…