Children who catch the common could be immune to MIS-C

Common cold could give children immunity to the rare MIS-C hyper-inflammatory condition caused by the coronavirus, study suggests

By Joe Pinkstone For Mailonline

Children who have previously caught the common cold have coronavirus antibodies that prevent them from developing the hyper-inflammatory condition called MIS-C, new research suggests.

The rare disease is caused by infection with the SARS-CoV-2 coronavirus, the same pathogen responsible for the current COVID-19 pandemic.

Research has found the condition, known as multisystem inflammatory syndrome in children (MIS-C), is different to both COVID-19 and Kawasaki disease.

However, little is known about why some children, roughly a month after being infected with the coronavirus, develop MIS-C symptoms.

Indicators of the disease include a rash, fever and abdominal pain as well as conjunctivitis, a cough and a headache.

Experts at the Karolinska Institutet in Sweden compared healthy children with youngsters suffering from MIS-C and Kawasaki disease.

Researchers say it is possible antibodies obtained after infection with the common cold could play a role in controlling the development of MIS-C.

Scroll down for video 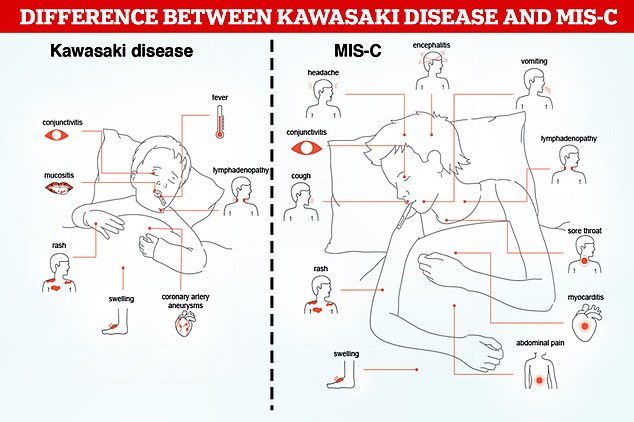 Experts at the Karolinska Institutet in Sweden compared healthy children with youngsters suffering from MIS-C and Kawsaki disease. Pictured, symptoms of both diseases 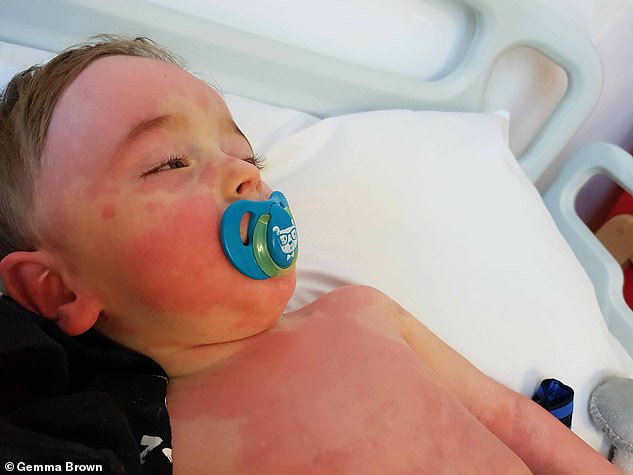 The researchers looked for evidence of antibodies to the coronaviruses HKU1 and betacoronavirus 1, both of which cause what we know as the common cold.

Unlike children with Kawasaki disease and children with mild COVID-19, children who developed MIS-C were lacking antibodies to these mild coronaviruses.

Dr Petter Brodin, lead author of the study, told MailOnline there is currently no way to verify the theory that immunity to the common cold via antibodies offers protection against MIS-C, but it appears this may be the case.

He believes common cold CoV antibodies and the memory B-cells that produce them may recognise SARS-CoV-2 virus and bind to it.

‘Such events will give the immune system a head start in defending against the virus and might enable a more efficient antibody response that directly zooms in on the right parts of the new virus to neutralise it,’ he adds. 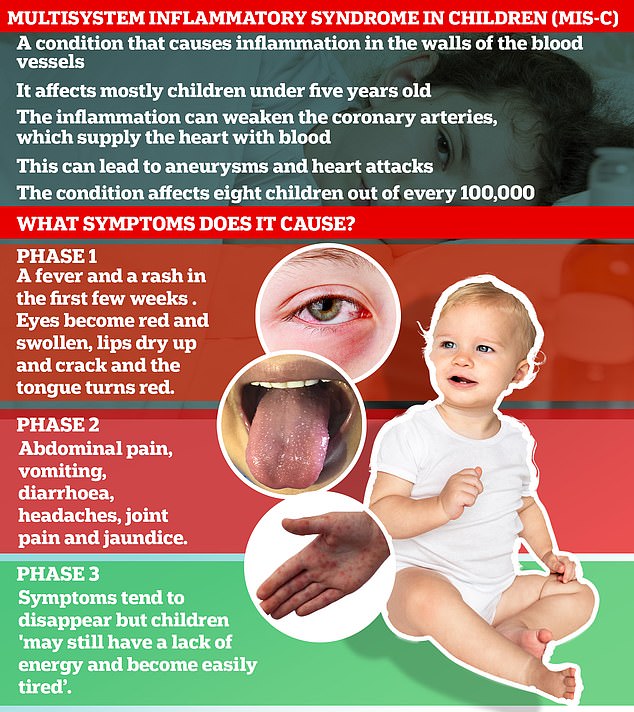 MIS-C is a form of toxic shock syndrome which causes the body’s immune system to attack its own organs. It is believed to be caused by infection with the coronavirus SARS-CoV-2

Another finding of the study, published in Cell, is that there are several antibodies present in MIS-C patients that attack the body’s own proteins, a process known as a cytokine storm.

This form of immune self-sabotage is believed to be a major contributor to severe cases of MIS-C.

However, while both illnesses are worsened by a cytokine storm, the processes are different for MIS-C and COVID-19.

Scientists are unable to explain why adults tend to develop COVID-19 while children are more inclined to be struck with MIS-C, despite being caused by the same virus.

It is believed the hyper-inflammatory condition is a delayed immune response to the infection, rendering traditional throat and nose swabs redundant.

As a result, antibody testing is one of the only reliable ways to ascertain and diagnose the symptoms.

As the world grappled with the COVID-19 pandemic, the Kawasaki-like condition was emerging and increasing in frequency.

Little is known about MIS-C, except it is rare, caused by SARS-CoV-2 and has symptoms similar, but not identical, to Kawasaki disease.

It almost exclusively affects children or young adults, in contrast to COVID-19 which rarely harms the young.

It emerged earlier this year with parents sharing heart-wrenching images of their children in hospital covered in bright red rashes.

In May, during the peak of the COVID-19 outbreak, doctors in America said the inflammatory condition could be affecting adults in their early 20s.

Although fatalities from MIS-C are very rare, they have been recorded. A 14-year-old boy in London died from the disease and at least four deaths were reported in the US.

MailOnline reported in May that Birmingham-based researchers had found the first proof the Kawasaki-like condition, later named MIS-C, was caused by SARS-CoV-2.

This was confirmed in August when academics at  King’s College London published a peer-reviewed study confirming the relationship.

Dr Manu Shankar-Hari, co-author of the August research, told MailOnline: ‘There is no diagnostic test for Kawasaki disease or MIS-C.

‘There are shared clinical features. Thus, best thing to do is to seek medical advice, if your child is unwell.

‘This research highlights that, unlike Kawasaki disease, MIS-C is associated with SARS-CoV-2 infection with different clinical and immune findings.’

The inflammatory condition affecting children during the pandemic is linked to infection with the coronavirus, a peer-reviewed study confirms.

The disease can manifest itself as a rash, fever and abdominal pain and is connected to previous infection with the same virus, SARS-CoV-2, that causes COVID-19.

COVID-19 has to date killed almost three-quarters of a million people worldwide.

Scientists are unable to explain why adults tend to develop COVID-19 while children are more inclined to be struck with MIS-C, despite being caused by the same virus.

It is believed the hyper-inflammatory condition is a delayed immune response to the infection, rendering traditional throat and nose swabs redundant.

But more than two-thirds (68 per cent) of children in the latest study tested positive for SARS-CoV-2 antibodies, proving they had been infected in the past.

Key Words: Trump: Kamala Harris as first female president ‘would be an insult to our country’

3 Afghans accused of links to insider attacks that killed U.S. troops are among…

Good Stocks To Buy Now? 4 Tech Stocks For Your Watchlist

How can armed groups in northern Mozambique be contained?

Why Kevin Durant, Kyrie Irving are sitting out Nets vs. Grizzlies game

Exclusive: When Katrina Kaif revealed how she deals with bad days