This was the 25th consecutive week with extraordinarily high initial claims. 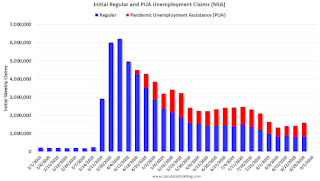 Initial claims, including Pandemic Unemployment Assistance (PUA) are rising, and are close to 1.7 million per week.

We are probably seeing some layoffs related to  the end of some Payroll Protection Programs (PPP), and possibly due to the fires in the West. 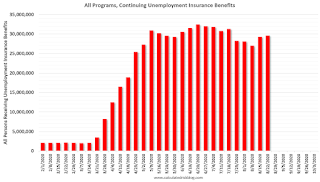 The second graph shows all person receiving unemployment insurance benefits on all programs. Note that this data is released with a two week lag, and is not seasonally adjusted.

There are typically around 2 million people receiving benefits from the various programs (mostly regular unemployment insurance).

As of the release this morning, there were still almost 30 million people receiving benefits as of August 22nd.

This was a very disappointing weekly report. Initial claims were higher than expected, and there was a further increase in initial claims (regular and PUA), and the total continued claims increased – and remains at a very high level.

Total solar eclipse 2020: Here’s how to watch it online

The Journey to Employee Acceptance

Former Disney Star Speaks Out Against Mask Mandates, Brought School Board Copies of…

Wyndham Championship: Justin Rose among golfers to miss out on place in the FedExCup…

What is *the best* time zone for global work and Zoom?

Herding, Warfare, and a Culture of Honor

Are Former Communist Countries the Only Sensible Places?