Covid-19 UK: Wembley Stadium could be opened up as a vaccination hub to stop Indian variant spread

Wembley Stadium could be used as a vaccine hub to fight against the Indian Covid variant, it was claimed today.

Health officials are in talks about opening up England’s national football stadium in north London, as well as Stamford Bridge in Chelsea.

Ministers hope the scheme could help stop the spread of the mutant B.1.617.2 strain in the capital,theTelegraphreports.

He hinted yesterday a plan to speed up jabs had been sent to Mr Hancock but that it appeared to have fallen on deaf ears.

Ministers are continuing to stick to the policy of speeding up second doses to over-50s in order to combat the variant.

But some areas have already begun vaccinating teenagers by offering jabs to ‘multi-generational households’.

London’s regional director for public health Keven Fenton yesterday confirmed that officials are ‘making an assessment’ on whether to officially widen the inoculation drive to youngsters.

And officials are considering using the two stadiums as mass vaccination sites with staff diverted from other health services.

After reopening to football fans for the first time this year on Saturday for the FA Cup final between Leicester and Chelsea (pictured), Wembley Stadium could now be used as a vaccine hub to fight against the Indian Covid variant 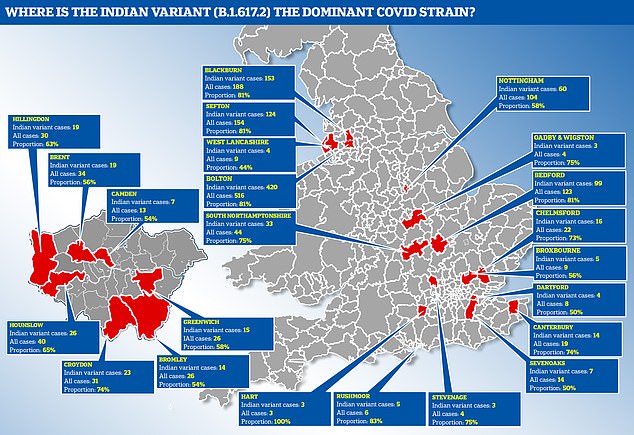 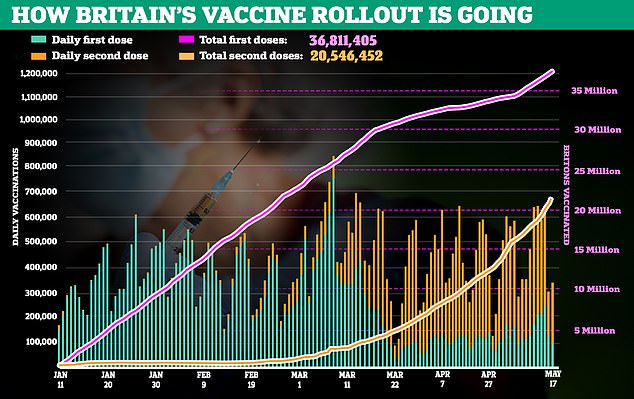 Football stadiums have been used as jab sites throughout the roll-out, with Crystal Palace’s 25,000-seat Selhurst Park and AFC Wimbledon’s 9,000-seat Plough Lane stadiums used in the capital so far. Harlequin’s Twickenham Stoop rugby stadium has also been used.

Reading’s Madjeski Stadium, Oxford United’s Kassam Stadium and Bristol’s Ashton Gate have also been used but none in the country are near the size of Wembley, which can seat 90,000 supporters on match days.

NHS England said a decision to expand the rollout to over-18s would need Number 10’s approval. People aged 36 and over are currently able to book a first vaccine appointment in England.

But the spread of the Indian variant has been highest in young adults and teenagers who haven’t yet been offered a vaccine yet.

Professor Christina Pagel, a mathematician from University College London and member of Independent Sage, today dismissed concerns the variant was ripping through communities with vaccine hesitancy.

She argued the data shows the strain is spreading most alarmingly in schoolchildren and young people, who can then spread it to older, vaccinated populations.

Professor Pagel told BBC Radio 4’s Today programme: ‘If you actually look at it by age profile, then both Bolton and Blackburn have almost exactly the same uptake age range as the reset of Britain.

‘Cases in both places are concentrated in school age children and young adults who havent had the opportunity to be vaccinated yet.

‘So I think trying to say its about people not being vaccinated just doesnt hold up when you look at the evidence.’ 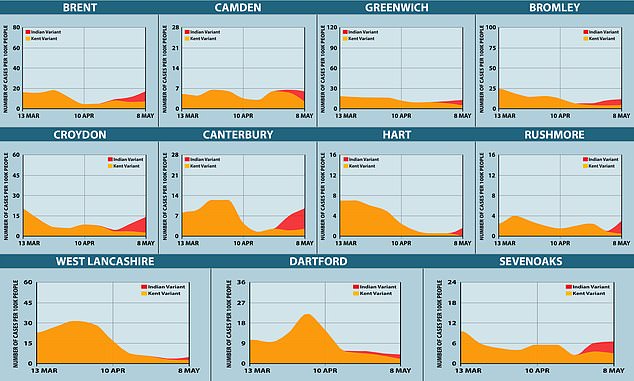 The Indian variant appears to be edging out the Kent strain in various parts of London, where it already accounts for half of cases or more, but low numbers of infections mean this may an effect caused by small clusters of cases 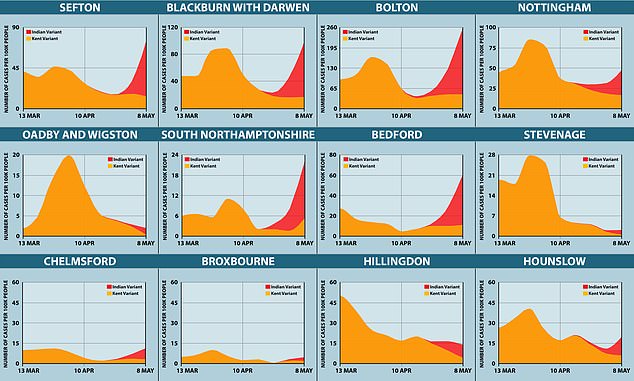 The growing red sections on graphs represent Indian variant cases surging in local authorities where it could be taking off. In these places it can already be seen edging out the Kent strain (orange) and scientists fear this suggests it is more infectious and could take over as the number one type of the virus in the UK. Note: Some areas, such as Stevenage, Broxbourne and Oadby are recording very few cases of the virus so changes may not constitute a trend

MailOnline yesterday revealed the variant has already overtaken the Kent strain in 23 English local authorities and has spread to 40 per cent of the country.

Analysis of samples from people infected with Covid has revealed that by the week ending May 8, the variant accounted for eight in 10 cases in hotspots Bolton, Blackburn with Darwen, Sefton and Bedford, as well as in Chelmsford in Essex and Croydon in London.

Despite the worrying development, the Prime Minister stressed that the roadmap out of lockdown is currently unchanged with the government sifting through emerging data about the fast-spreading strain.

But he appeared to shift his language slightly by saying there is not yet ‘conclusive’ evidence that the roadmap will need to be altered and said things would be clearer in a ‘few days’.

He said: ‘We are looking at the epidemiology the whole time as it comes in and, at the moment, partly because we have built up such a wall of defences with the vaccination programme, I don’t see anything conclusive at the moment to say that we need to deviate from the road map.

‘But we’ve got to be cautious and we are keeping everything under very close observation. We’ll know a lot more in a few days’ time.’

Photographers across Mexico have been documenting the challenges of distance learning

Are the Browns going to need to draft a QB?

City-size neutron stars may actually be bigger than we thought

Can Marijuana or CBD Help With Ulcerative Colitis?

Find a job in cyber? Become a boxer? The odd U.K. government advice for arts workers…

Warnings of SIX-HOUR airport queues and chaos lasting for WEEKS

Senate Votes Postponed for Two Weeks: What are the Implications?

The Arecibo Telescope Has Suffered a Fatal Collapse, Smashing It Into Pieces

With the departure of the world’s loneliest elephant, Islamabad’s zoo has closed —…

Young people are causing COVID-19 spikes. But are they solely to blame?