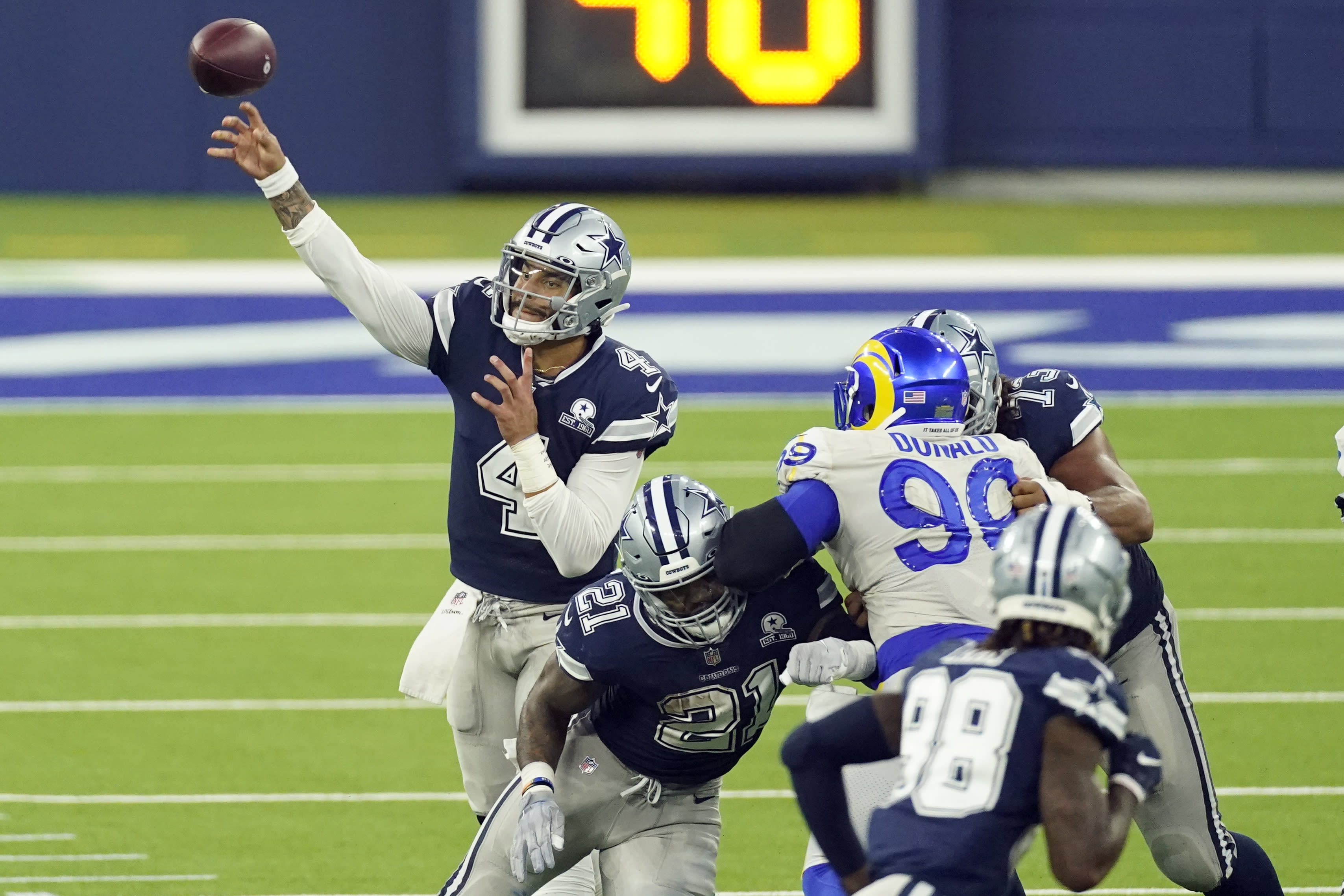 INGLEWOOD, Calif. — For a few fleeting seconds, Dak Prescott looked like he had atoned for a rocky second half, rescued the mistake-prone Dallas Cowboys and demonstrated why he is worthy of the lucrative long-term contract he is seeking.

Only then did Prescott spot the yellow flag that wiped all that away.

An unconvincing offensive pass interference call against wide receiver Michael Gallup negated a 47-yard strike from Prescott that would have put the Cowboys within range of a game-tying field goal with 21 seconds to go. The penalty left the Cowboys facing 3rd-and-20 on their own half of the field, dooming them to start Mike McCarthy’s coaching tenure with a 20-17 loss to the Los Angeles Rams.

Asked about the call after the game, Ramsey insisted the offensive pass interference was “clear as day.”

“If they wouldn’t have called that, I would have been highly upset,” he said.

McCarthy was less convinced that referees got it right.

“I was surprised there was a call there,” he said. “You just don’t usually see that [call] in a critical point in the game.”

The disputed call against Gallup was bitterly disappointing for the Cowboys, but they were correct not to blame it for their loss. They wasted so many chances to spoil the Rams’ inaugural game at glitzy $ 5 billion SoFi Stadium, which sat empty and silent on Sunday night because of COVID-19 restrictions.

Dallas’ flurry of second-half blunders started late in the third quarter after referees missed a blow to Jared Goff’s head that led to a Chinobe Awuzie interception at the Rams’ 39-yard line. That gave the Cowboys a golden opportunity to score a touchdown and regain the lead, but their faltering offense produced only one first down and settled for a field goal to pull within three.

The key play came on 3rd-and-5 when Amari Cooper wasn’t expecting a throw from Prescott and had it bounce off his thigh. Prescott did not immediately look to the area vacated by a Rams blitz and missed Gallup flash open downfield across the middle.

The next Dallas drive also stalled deep in Rams’ territory, this time because of some curious game management from McCarthy.

The man hired to replace Jason Garrett made a Garrett-esque decision, running the ball on 3rd-and-6 from the Rams’ 14-yard line. When Ezekiel Elliot only managed to gain three yards, McCarthy made the bold call to go for it on fourth down instead of sending Greg Zuerlein in to kick a game-tying field goal against his former team.

“The conservative play there is to kick the field goal,” McCarthy said after the game, “but I just felt really good about how we were moving the football.”

Numbers crunchers actually backed up McCarthy that going for it on fourth down was a statistically favorable decision, but the new Dallas coach probably wishes the Cowboys had better executed his play call. Rookie wideout CeeDee Lamb ran a 2-yard crossing route on 4th-and-3 and safety Jordan Fuller sniffed out the play and leveled him on the spot, a game-changing hit that helped the Rams preserve their slim lead.

“Unbelievable play,” Rams coach Sean McVay said. “That flipped the whole momentum of the game. That was arguably the play of the game.”

With Prescott signing a franchise tag this summer and playing on a one-year contract, every Cowboys game this season will be a referendum on his future with the club. Dallas must decide if he is worth the long-term contract he is seeking, if he’s the quarterback who can lead the franchise back to the Super Bowl for the first time in a generation.

The Rams loss was a quintessential Prescott performance because he offered evidence for both sides.

Supporters of Prescott will point to his brilliant first half in which he completed 15 of 18 passes for nearly 200 yards and repeatedly sacrificed his body for his team. On one second quarter pass, Prescott hit Lamb in stride on a deep crossing route with a Rams lineman draped all over him. Minutes later, he scrambled out of a collapsing pocket, absorbed a crushing hit and dove for the goal line, not the actions of a man who is worried about protecting himself while on a one-year contract.

Critics of Prescott will point to a lackluster second half when Prescott’s offense produced only three points and failed time after time on third down. Dallas went 3 of 12 on third down for the game. Prescott finished with 266 yards passing, no turnovers and a 92.5 passer rating.

Just for a moment, Prescott thought he had atoned for his second-half mistakes with his clutch strike to Gallup in the game’s dying seconds.

Then he saw the flag on the turf and smiled wryly. His most impressive pass of the night was all for nothing.

US Open confident in health and safety plans

An Easy Way to Solve the Mail-In Vote Dilemma

Neymar says ankle injury ‘could have been worse’

‘Club of my life’: Messi to stay at Barcelona for another year

Third time’s a charm for Miocic over Cormier

Steelers’ Ben Roethlisberger blames self for loss to…