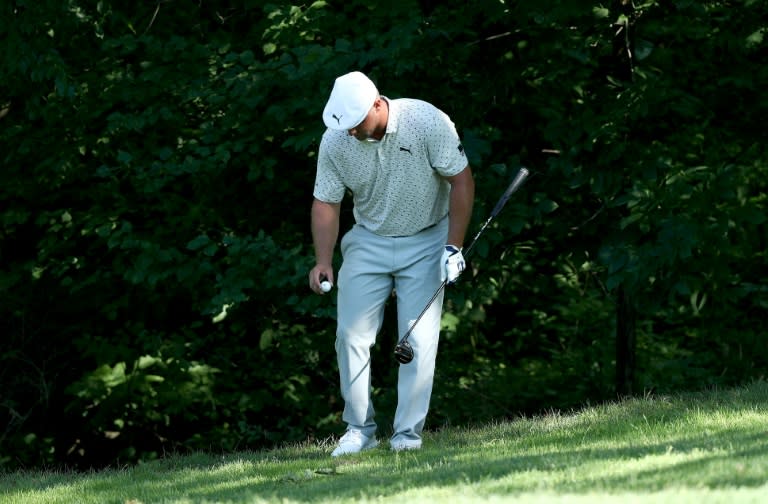 Los Angeles (AFP) – Bryson DeChambeau’s bigger-is-better philosophy couldn’t be applied to his quintuple bogey 10 at the par-five 15th hole Friday in the second round of the Memorial tournament.

The big number ensured that the world number seven missed the cut at Muirfield Village in Dublin, Ohio, just two weeks after capturing his sixth US PGA Tour title in Detroit.

DeChambeau has made headlines since the US PGA Tour resumed in the wake of a three-month coronavirus shutdown with a bulked up body aimed at giving him more length off the tee.

That didn’t help him at the 15th, where his tee shot sailed into the creek left of the fairway.

From there, he hit a three-wood that went out of bounds.

He hit a provisional ball in case he was able to find the previous shot, but that also went out of bounds. His fourth attempt found dense rough some 40 yards from the flag.

DeChambeau was preparing to hit his eighth shot when he discovered his third nestled against a boundary fence.

He called for a rules official and argued the ball was in play, but officials — including one called in for a second opinion — determined it was out of bounds.

A frustrated DeChambeau then found the green with his eighth shot and two-putted from 29 feet for a 10, his worst single-hole score on the PGA Tour by two strokes.

The Psychology Behind Why People Buy Luxury Goods

‘Maskne’: How to prevent acne and other skin problems caused by face masks

The giant Twitter hack is being investigated by the FBI