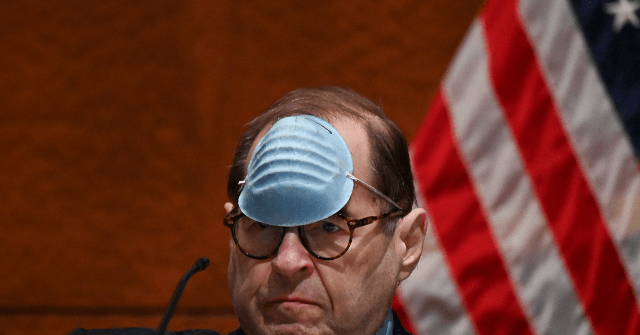 “It is true. There’s violence across the whole country,” reporter Austen Fleccas said to Nadler. “Do you disavow the violence from Antifa that’s happening in Portland right now? There’s riots—”

“That’s a myth that’s being spread only in Washington, DC,” Nadler said.

I ran into Jerry Nadler in DC and asked him to disavow the Antifa violence/rioting in Portland.

BREAKING: Antifa has brought down the barrier. War begins pic.twitter.com/syfPSMA3RJ

This is diametrically opposed to what the Department of Homeland Security’s (DHS) assessment of the situation in Portland.

“The violent situation Portland has witnessed for the past eight weeks continues with violent anarchists rioting on the streets as federal law enforcement officers work diligently and honorably to enforce federal law, defend federal property, and protect the lives of their fellow officers,” DHS said in a statement issued on Sunday. “As federal officers left the courthouse to respond to attacks on the fence, just like on previous nights they were met by rioters with hard projectiles, mortar style fireworks and lasers that can cause permanent blindness. Over the previous 24 hours, such assaults have resulted in at least 14 federal officers injured.”

Portland has divulged into a war zone!

Barrier has been destroyed

Never seen such force from either side

After dumping all the @RiotRibs trash at the Portland federal courthouse, they set it on fire. Video by @ShelbyTalcott. #antifa pic.twitter.com/lrM6LPZklu

Antifa rioters are throwing Molotov cocktails toward federal officers at the courthouse. Earlier in the day, police found a cache of ready-made incendiary devices and fully loaded magazines. Video by @livesmattershow. #PortlandRiots pic.twitter.com/KFPyahZ8Er

Are Hypersonic Missiles the Ultimate Threat to Aircraft Carriers?

Something Strange Happens on Mars During a Solar Eclipse

Motorola One Fusion+ makes its way to the US, priced at $399

COVID-19: NFL Stadium Being Cleaned with Drones Ahead of Return of Fans

How early was the novel coronavirus circulating?

Mark Hulbert: Why men are more likely to invest in Tesla

Melbourne Covid: Father in ICU with ‘three days to live’ was vaccine hesitant