Democrats Hope Georgia Will Become The Next Virginia, But It Could End Up Being The Next North Carolina 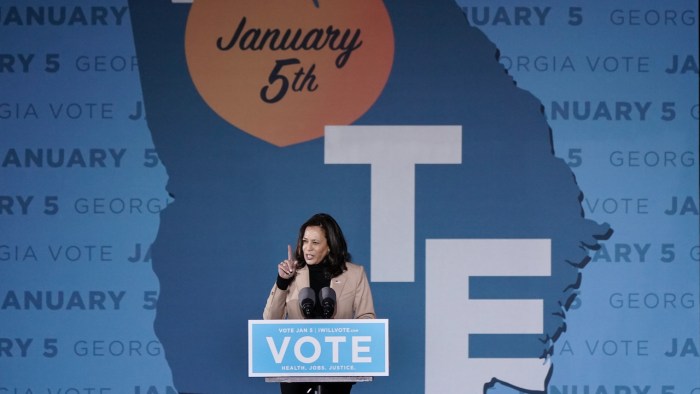 When Colorado, North Carolina and Virginia flipped to the Democratic side in the 2008 presidential election, it seemed like the start of a long-lasting shift. A Democratic Party increasingly synonymous with people of color, college graduates and urbanites appeared destined to win in states with growing, well-educated, racially diverse metropolises like Charlotte, Denver, the Raleigh-Durham area and the northern Virginia suburbs outside Washington, D.C.

That’s exactly what happened in Colorado and Virginia, which have become reliably blue in most statewide elections. But not North Carolina. In November 2008, Barack Obama narrowly won North Carolina (by less than 1 percentage point), and Democratic U.S. Senate candidate Kay Hagan carried the state by 8 points. But the Democrats haven’t won a U.S. Senate or presidential race there since, going 0 for 7 when you count the losses by Joe Biden and Senate candidate Cal Cunningham this November.

With Democrats carrying Arizona and Georgia in the 2020 presidential election for the first time in decades, it’s worth thinking about North Carolina. Arizona and Georgia are also seeing major demographic shifts — either or both states could be the next Colorado or Virginia. But even if Democrats win one or both U.S. Senate seats in Tuesday’s runoffs in Georgia, North Carolina should remain a cautionary tale for Democrats: States like Georgia that are becoming more urban, more educated and less white don’t always turn into reliable parts of Blue America.

Democrats consistently lose in all but three of the 16 states that the U.S. Census Bureau considers the South (Delaware, Maryland and Virginia are the exceptions). So in the context of U.S. politics overall, it is not surprising that Democrats are struggling in a Southern state where there is so much partisan and racial polarization that a federal appeals court declared in 2016 that voter restrictions by North Carolina Republicans “target African-Americans with almost surgical precision.”

In fact, the Democratic performances in North Carolina in 2008 and 2020 were fairly similar — even if one performance produced a victory and one a defeat. And that’s the more notable trend: Democrats haven’t really gained ground in North Carolina in 12 years. And their inability to make gains there is a great illustration of why demographics are not destiny in American politics.

North Carolina’s electorate went from about 28 percent Asian, Black, Hispanic or another race in 2010Basically anyone who is not a non-Hispanic white person.

“>1 to 31 percent in 2018, according to data from the Pew Research Center. All eligible voters don’t end up casting ballots and all voters of color aren’t Democrats, but this kind of demographic shift generally helps Democrats. North Carolina’s population grew at a faster rate than all but 10 other states from 2008 to 2018, and much of that population growth is happening in the state’s two big metro areas, Charlotte and the Research Triangle, which includes Chapel Hill, Durham and Raleigh. That’s another trend that should help Democrats.

And in these growing metro areas in North Carolina, Democrats are running up bigger margins, just like in other states. In 2008, Obama won Mecklenburg County, the most populous county in the Charlotte area, by 24 points; Biden won it by 35. In Raleigh-area Wake County, the state’s most-populous county overall, Obama won by 14 points, Biden by 27. According to the Edison Research exit polls (take them with a grain of salt, but they are basically the only way to compare demographic data across multiple election cycles), Obama won around 38 percent of white college graduates in 2008 in North Carolina, while Biden won about 50 percent this year.

And Democrats’ struggles aren’t just in rural areas in North Carolina. In the counties generally considered part of either the Charlotte or Research Triangle metro areas, Biden did worse than Obama in 12 of the 19. Those 12 counties tend to be fairly small, exurban and GOP-leaning in the first place, but the fact that Republicans made gains in those places shows how little Democrats have advanced outside of North Carolina’s core liberal bastions over the past 12 years.

Whitney Ross Manzo, a political science professor at Raleigh-based Meredith College and a contributor to a North Carolina politics blog called Old North State Politics, argues that there is a deep tension in the state between people who grew up there and the influx of people from other states settling in the Charlotte and Research Triangle areas.

“North Carolina is still shifting from a predominantly rural, native-born state into a more urban/suburban state filled with more outsiders,” said Manzo. “There is a real undercurrent in political discussions both within the North Carolina General Assembly and in campaigns about appealing to the ‘true’ North Carolinians … Most of this election cycle the Republican message was essentially that Democrats don’t understand North Carolina and North Carolinian values, especially Democrats who have worked in DC.”

With their gains in core urban areas and losses everywhere else, Democrats were getting around 35-40 percent of the white vote in North Carolina in 2008 and are getting basically the same now, making it hard for them to carry the state. It’s not that Democrats always lose in North Carolina. They won North Carolina’s only major statewide election, for a state Supreme Court seat, in 2018. In 2020, while North Carolina Democrats lost three state Supreme Court elections and six other contests for statewide office along with the presidential and U.S. Senate elections, they won the races for governor, secretary of state, state auditor and attorney general. But the broader story is that North Carolina remains a closely divided state that leans a tiny bit Republican — basically the same as in 2008.

“We are a battleground state. But we aren’t much of a swing state. We haven’t swung,” said Susan Roberts, a political science professor at Davidson College.

“Long term, I would say that North Carolina moves in the direction of Virginia and ends up light blue. This is mainly because the Raleigh and Charlotte metro areas are continuing to explode, bringing in more and more Democratic and urban outsiders,” said Manzo.

But, she added, “I think North Carolina will remain purple-ish for the near future.”

Why North Carolina is relevant to Georgia

There are some reasons to think — no matter what happens in Georgia’s Senate races on Tuesday — that the Peach State will be more favorable to Democrats than the Tar Heel State will in the near future. First of all, rural and non-college white voters moved away from Democrats earlier in Georgia than in North Carolina. So it may be harder for Republicans to offset losses elsewhere with those groups, as those groups are already very Republican-leaning in Georgia.

Second, Georgia is undergoing a bit more demographic change than North Carolina, with its electorate going from 37 percent people of color in 2010 to 42 percent in 2018. Black voters, who are overwhelmingly Democratic, are about 32 percent of Georgia’s electorate, compared with 23 percent in North Carolina. Third, as American politics is increasingly divided between a Democratic Party strong in urban areas and a Republican Party strong in rural ones, that hurts Democrats more in North Carolina than in Georgia, because more people live in rural areas in the former (about 37 percent) than in the latter (31 percent).

Finally, not only do more people in Georgia live in urban and suburban areas compared with North Carolinians, but a majority of Georgia’s population (around 57 percent) lives in the Atlanta area. In contrast, only about 44 percent of North Carolina residents live in either Charlotte or the Research Triangle. It’s likely that the growing racial diversity and liberalism of the Atlanta area is pushing longtime white residents there to the left and that effect is lessened in North Carolina because not as many people live in a big metropolis.

But even with all that going for Democrats in Georgia, Biden won the state by only 0.24 points in 2020, even less than Obama’s 2008 margin in North Carolina. 2020 could obviously be the harbinger of a sustained leftward shift in Georgia — the Atlanta area and Georgia’s white college graduates continue to get more liberal in subsequent election cycles, pushing the state overall into Democratic territory.

But maybe not. There are three other paths for Georgia to take. Perhaps it will essentially remain a 50-50 state, with the same general geographic and demographic patterns as in 2020. Perhaps it will swing to the right, with some voters in the Atlanta suburbs aligning with the GOP again once Trump leaves office. Or perhaps, like North Carolina, the state will remain closely divided overall even as voter allegiances change and Democrats gain strength in some areas while Republicans do in others.

I don’t know. And that’s why the North Carolina story is so relevant to what is happening in Georgia right now. Biden’s win in Georgia was important, not only in terms of getting to 270 electoral votes but of illustrating that his victory was fairly broad and unequivocal, even as Trump and Republicans have tried to overturn the results. If Democratic Senate candidates Jon Ossoff and Raphael Warnock both win, that would be huge in terms of giving Democrats control of the White House and both chambers of the U.S. Congress.The Senate would be equally divided, but Vice President-elect Kamala Harris would be able to cast deciding votes.

“>2 But even if Democrats win a sweep this year, we should not leave 2020 with the idea that Georgia is a reliably blue state or even necessarily on the path to becoming reliably blue. After all, Obama’s and Hagan’s wins on Election Day in 2008 in North Carolina seemed like a sign of things to come in the state. They were not.

Forget Trent: Klopp will be fuming with “world class” LFC star who made just 11 passes – opinion

The Next 5 Groups Who Will Get the COVID-19 Vaccine

Turning sweat against itself with a metal-free antiperspirant

How Far Could Trump Go To Undermine The Election Results?

Is this the future of fast wired charging

In One Chart: What history says about the stock market and a falling dollar

Test Your Pandemic Fighting Skills With the New ‘Plague Inc: The Cure’…

Congress Awards Medals to Police Who Responded to Jan. 6…

Cuomo Accuser Who Blamed Media for Emboldening Him Speaks…