Did The Atlantic’s Goldberg Just Admit His Trump Story Is Shoddy? 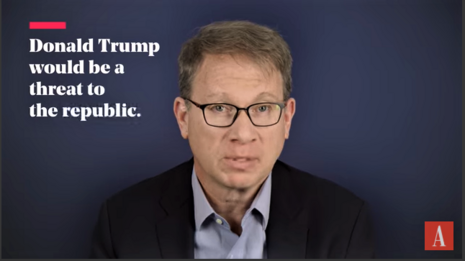 Over at The Political Insider is this headline: “Atlantic Editor Admits Story About Trump Disparaging Fallen Soldiers Could Be Wrong

The story in question is the supposed “bombshell” that on a visit to Europe the President’s visit to a military cemetery was cancelled not because of bad weather, as the White House had said at the time, but because the President didn’t want to get his hair wet. It also alleged that Trump had referred to veterans as “suckers” and “losers.”

The story, but of course, was grabbed by the Trump-hating media and went everywhere. But now?

The Atlantic piece has been called out for being false by no less than ex-Trump national security adviser John Bolton. Bolton, famously, is no Trump fan, and wrote a scorching memoir about his time with Trump. Said Bolton:

“According to what that article said, the president made disparaging remarks about soldiers and people buried in the cemetery in connection with the decision for him not to go to the ceremony that was planned that afternoon, and that was simply false….I don’t know who told the author that, but that was false.”

A slew of other Trump aides, who were present, said a version of the same.

Now, as reported in The Political Insider? Now there is this from The Atlantic’s editor, Jeffrey Goldberg, per George Washington University’s Jonathan Turley in a tweet.

“I just watched Goldberg’s interview on CNN and was struck by his response to evidence that the flight to the cemetery was canceled for weather. Both Bolton and Pentagon sources have confirmed that reason, and Goldberg says that that all may be true…”

Say what? If Goldberg says of Bolton and Pentagon sources that what they say in denying the story “may be true” — than that would make The Atlantic’s account false. And yet…Goldberg goes on to say this:

“Uh, I stand by my reporting. I have multiple sources saying this is what happened, so I stand by it.”

And liberals wonder why Americans have lost trust in the liberal “mainstream” media.

Another issue that the media is abuzz about from the Bob Woodward Trump book is the President comparing the virus to the flu in public. The problem? So too did the media.

Here was The Washington Post at the time – in February: “Get a grippe, America. The flu is a much bigger threat than coronavirus, for now.”

This same comparison was made on a number of media outlets from CNN to the Los Angeles Times to ABC News. It doesn’t mean any of these outlets were deliberately lying or trying to mislead. It simply means that as the virus arrived a lot of people in and out of the media, including the President, were trying to understand it. And the flu was so obviously an instinctive reach in trying to understand it that the virus was frequently compared to the flu.

The point here? Scorching the President for saying a version of exactly what the media itself was saying is, yet again, a swipe at the media’s own credibility. Conveniently forgetting exactly what they themselves were saying back there in the early stages of the virus.

So what do we really learn from Goldberg’s wobbling on his own story and the media’s amnesia about their own flu projections? What we learn is the blindingly obvious.

We are just under two months from election day — an election whose central figure is a president who is despised by the liberal media. There is no story past or present, big or small, that will not be made into the latest “bombshell” designed to inflict as much political damage as possible on the president.

These “Flying Boats” Were Built To Carry a Nuclear Payload

Where is Nine Perfect Strangers filmed?

PDC World Darts Championship: All you need to know

What the Friends reunion reveals and shies away from

What A Team Health Assessment Can Reveal About Your Business

‘The Good Doctor’s Christian Resident on Abortion: ‘I Don’t Regret It,’ ‘God Forgave…