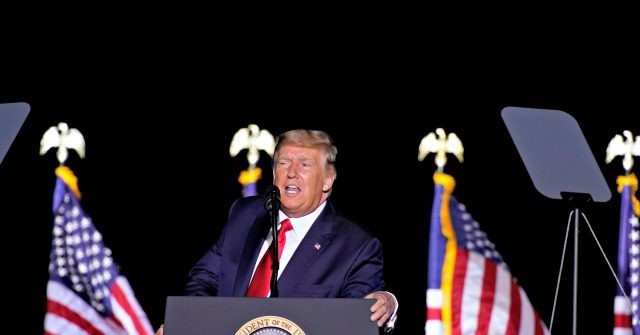 President Donald Trump on Saturday rallied in Minden, Nevada, announcing that he would stop being nice to former Vice President Joe Biden after his campaign accused him in an ad of disparaging the troops.

“Once I saw that ad, I don’t have to be nice anymore, I really mean it,” Trump said.

The president said that the ad featured the widely disputed The Atlantic article that cited anonymous sources claiming that the president called dead soldiers “suckers” and “losers.”

Trump was disgusted by the ad, describing The Atlantic as a “third rate magazine” and the article’s author as a “sleaze bag reporter.”

Prior to the rally, the president also condemned the ad on Twitter, calling it a “made-up lie” and a “total con job.”

Just landed in Nevada but while on Air Force One watched most vicious TV commercial I have ever seen. Pathetic Joe’s people placed an unsourced ad where they have me saying unthinkable things about soldiers while standing over their graves. It is a MADE UP LIE. A TOTAL CON JOB!

He told his supporters that 25 people went on the record to dispute The Atlantic story that the attack ad used as a source.

Trump said he knew a lot of horrible people but none that would ever say something like that about the troops.

“None of those people – and they’re the worst – real estate developers in New York, you don’t get much worse … not one person do I know that would say that standing on top of graves of heroes,” he said.

Trump said that he loved the troops and treated them with the greatest love and respect.

“There’s nobody that loves our military, respects it, and the people more than me,” he said.

Trump said the ad meant that he would no longer hold back against Biden.

“I can be bad to him because he put the most vicious ad on television that I’ve ever seen,” he said.

Trump joked that Biden probably did not even know about the ad.

“Yet pathetic Joe, and he’s a pathetic human being to allow that to happen –  here’s the problem, he doesn’t even know it happened,” Trump said. “I don’t think, I think he has no idea.”

“Sleepy Joe Biden … you know where he is now?” he continued. “He’s in his damn basement again.”

Trump said that Biden was “shot” mentally and was unfit for the presidency.

The president said that corporate media would continue to favor Biden, despite his historically bad candidacy, previewing the upcoming debate.

“If he gets off the stage, they’re going to say it was the single greatest debate they’ve ever seen,” he predicted.

Trump also said that Biden was beholden to the “left-wing puppet masters” running his campaign.

“Joe Biden can not lead our country, because he doesn’t really believe in our country, right now. I don’t think he believes in anything. He just wants to go to sleep, that’s all.”

What’s next for James Harden, Russell Westbrook and the Rockets? Three big questions about Houston’s future

5 Economic Reports That Affect the Euro

Get Your Light Sabers Out! A New ‘Star Wars’ DLC Is Available in…

‘They Don’t Call Them That Anymore’

How wrong were AAPL analysts about today’s share price?

GST collections fall to an 8-month low in May; exceed Rs 1 trillion-mark