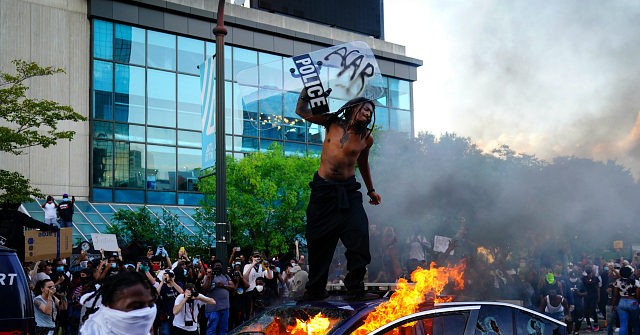 “The corporations, these poor stupid people that run the — you know, they get paid a lot of money. They’re weak infective people, let’s face it,” Trump said at his rally in Nevada on Sunday night.

Trump estimated that between $ 100 – $ 250 million had been pledged to left-wing organizations during the George Floyd protests. Breitbart News reported in June that American corporations pledged $ 1.175 billion to social and racial justice organizations.

“It’s so embarrassing … that money is not used for good reasons,” Trump said.

The president mocked the corporations for funding the left-wing groups, noting that the left would turn on them if they had the chance.

“They’ll be the first to go if the radical Left ever took — they’d throw those guys out like they were nothing,” he said. “If they were lucky, they’d just be thrown out. It would probably be a lot rougher than that.”

Trump suggested that the executives giving money to left-wing groups are clueless about their intent and should fund more worthy causes.

“They should give money to the families of the crime victims and the fallen officers,” he said as the rally crowd roared with approval.

What channel is Titans vs. Broncos on today? Time, TV schedule for ‘Monday Night Football’ in Week 1

Bizarre tail on little dinosaur-age bird was literally a drag

I want to take a life-insurance policy out on my husband. He says hell will freeze…

Can we explain dark matter by adding more dimensions to the universe?

Level 1: The new rules of sports nutrition: This could revolutionize the way you…