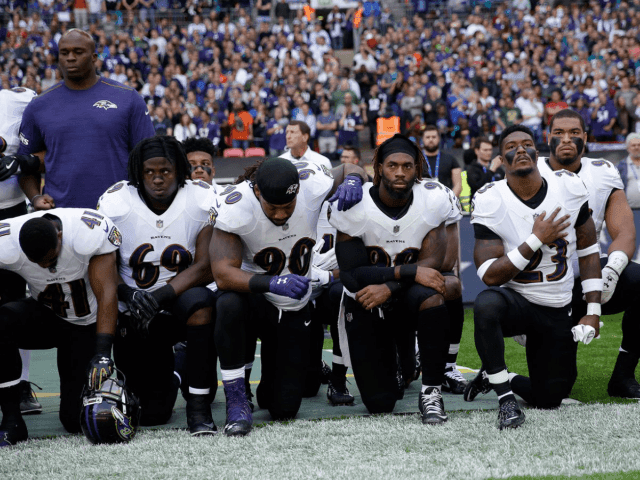 The players have said they will protest and, if they do, ESPN says they will televise it.

Normally ESPN only shows the honor guard and singing of the Star-Spangled Banner prior to games. However, for their opening Monday Night Football double-header, ESPN will also televise the “black national anthem,” a song known as Lift Ev’ry Voice and Sing. In addition, the network will also “show social justice movements, actions, as they happen.”

“Our policy is to cover the anthem when it’s newsworthy. That’s not going to change,” ESPN Executive Vice President of Event and Studio Production Stephanie Druley told reporters. “We are going to continue as we’ve done with the NBA and the WNBA. We will cover social justice movements, actions, as they happen. We’re not going to shy away from that.”

Druley stressed that ESPN does not view the social justice protests as being political.

“Look, we’re going to keep our main rule, which is when it intersects with sports, we’re going to cover it, and look, we don’t see the social justice movement as being political. It’s social justice,” said Druley. She can’t say if they’ll show the anthem for half the season or just two of 10 games. “I don’t know. We will make a judgment call every week. But I can tell you that Week 1, that first game, you will see the anthem — and you will see ‘Lift Every Voice.’”

The normally crowded NFL sidelines will look very different to millions of TV viewers this season. The league is strictly limiting the number of people with field access to avoid infecting coaches and players.

TV sideline reporters like ESPN’s Salters and CBS’ Wolfson will have to do their jobs from the stands. There will not be military/police honor guards on the field or on-field performances of the national anthem. Ditto for cheerleaders, marching bands and team mascots.

The NFL’s 1,700 players, meanwhile, will be encouraged to salute victims of police brutality by placing decals with their names on their helmets. The league will also stencil social justice statements such as “End Racism” and “It Takes All Of Us” in end zones this season. The league will play “Lift Every Voice and Sing” before each game during opening weekend.

ESPN’s first Monday Night Football game is scheduled for September 14, when the Giants take on the Steelers and the Titans face the Broncos.

The 10 best Caribbean restaurants in London

Retro-cool starfighters and spaceships revealed for ‘Star Wars: The High…

‘They’re Coming After Your Children’: Pelosi Rips Republicans For Moving Ahead With…

FA Center: This mutual fund may have cracked the ‘Buffett Code’ — Berkshire…

Many Americans Turn to This Risky Source of Retirement Tips

What should I ask Claudia Goldin?

Ultracold atoms can work together to shape or steer light

: Homeland Security whistle-blower says he was pressured to alter intelligence on…