Exclusive– Pompeo on Afghan Peace Talks: ‘We’re on a Pathway to Achieve’ Zero U.S. Forces in Afghanistan by Spring 2021 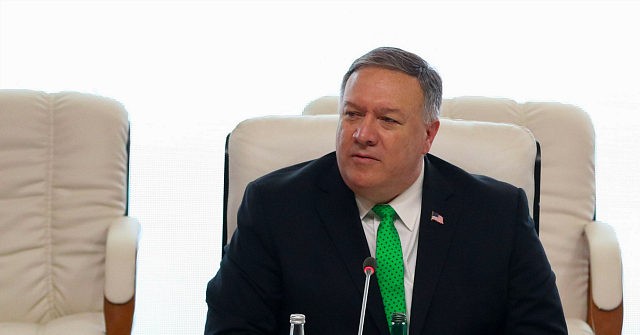 DOHA, Qatar — U.S. Secretary of State Mike Pompeo told Breitbart News exclusively — after meetings between Afghan government officials and Taliban leaders as part of the beginning of intra-Afghan peace negotiations — that the process is moving along on pace for a full withdrawal of all U.S. forces from Afghanistan by the spring of 2021.

“I do,” Pompeo said when asked if the process is moving on pace with a Feb. 29 agreement between the United States and Taliban leadership that laid out the framework for the United States to reduce the troop count to zero by April or May of next year.

Pompeo told Breitbart News that the process for a full withdrawal of all U.S. forces by the spring of next year requires three main conditions of the Afghan government and Taliban leaders.

“The conditionality is really three-fold,” Pompeo said. “One, there is an obligation they have with respect to foreign terrorist groups — primarily al-Qaeda, but all four terrorist groups — they are not permitted, and the language is very clear that they are not permitted and that they have to break with them. Second, they have to engage in these conversations in a way that is substantive and not just physically sit in the room, but they need to have serious conversations and begin to work their way through it. Then, third, they have a responsibility as part of that to ensure that outside actors don’t act as spoilers for this, and there are many hands who would like to see this undone and would like to see America mired in Afghanistan for another 20 years. Both the Afghan government and the Taliban have a responsibility to prevent that. Those are the conditions, we’ll measure them. There’s a set of CT metrics that’s pretty clearly laid out. We’ll measure them and the president will make a decision if there’s sufficient compliance to get us to zero. I think we’re on a pathway to achieve that.”

[email protected] arrives in Doha, Qatar, for peace talks between the Afghan government and the Taliban. Photo via @mboyle1 pic.twitter.com/GUTYGftHZJ

While in Qatar’s capital city, Doha, for the Qatari-hosted peace talks between Afghan government officials and Taliban leaders, Pompeo met with both parties as well as with Qatari leaders. These negotiations follow the Feb. 29 agreement between the United States and Taliban leaders that laid out the framework for U.S. withdrawal from Afghanistan, including most importantly a Taliban commitment not to harbor terrorists from groups like al-Qaeda, which they were doing when they were in power before and in the immediate aftermath of the 9/11 terrorist attacks on the United States in 2001.

While these talks were a bit delayed — controversial prisoner swaps, as well as the coronavirus pandemic, slowed their beginning from March or April until now — Pompeo told Breitbart News that the talks were productive and moving in the right direction and on the schedule needed for the United States to finally withdraw all forces from Afghanistan 19 years after the 9/11 attacks.

“So, 19 years after 9/11, we finally have the Afghans prepared to sit down and have a serious conversation about taking their country forward without all the violence,” Pompeo said. “President Trump laid out two objectives: One, reduce the American footprint there and get our soldiers, sailors, airmen, and Marines — get everybody home. Stop getting people killed there. Get the maximum extent feasible. Second, we’re going to have to make sure we protect the homeland. I think we’re, today, on our way to putting America in a place where we can do both of those things. The meetings went as could be expected at the first gathering. They were getting their teams together, getting to know each other, and they began to set out the framework of what negotiations will look like. There are some very, very difficult issues and there will be bumps in the road, but back in February, we were hoping that today would come back in March or April. It’s been six months, but I’m happy with the progress that was made today. I think they’ll meet again tomorrow in Doha and then they’ll go back and start on the framework of the negotiations not long after that.”

Asked what the sticking points are for a peace agreement that lasts between the Afghan government and Taliban officials, which world leaders including U.S. officials cheering on the talks hope will soon lead to a ceasefire in Afghanistan, Pompeo said that the “central challenge” is how power will be shared among the various parties in the country.

“In the end, the central challenge is what will the Afghan government look like,” Pompeo said. “What will be the power-sharing arrangement? This is a challenge anytime you have throughout history insurgencies and other times when nations have civil strife. We took al-Qaeda out, and the Taliban still have weapons and the capacity to inflict damage. We made clear to them when I met with them today — the Taliban — that they have an obligation to reduce violence immediately and significantly so these negotiations can proceed. So there will be issues of power-sharing and how the government is established at the center of the conversation.”

Specifically about his meeting with Taliban co-founder and lead negotiator Mullah Abdul Ghani Baradar, Pompeo told Breitbart News that he is “convinced” there is a “solution” to the differences between the two sides.

“It’s the third time, maybe the fourth time, that I’ve spoken to him — the second time I’ve met with him in person. They have a very clear set of objectives, of things that they are laying down that they want and they need,” Pompeo said. “When I understand what the Afghan government wants and needs, and what the people of Afghanistan outside of the Taliban and Taliban-controlled territories want, I’m convinced there is a solution to this. I hope that that’s the case.”

Pompeo’s interview with Breitbart News came aboard the U.S. Air Force jet that carried him and the American delegation and media, including Breitbart News, to the talks. The interview, which was conducted on the tarmac in Cyprus after Pompeo stopped there for a meeting with its president on the way home to Washington, DC, focused on the broader foreign policy themes of the Trump administration and how these peace talks fit together with President Trump’s vision for the Middle East and for the broader world.

More from the interview is forthcoming.

5 Must Have T-Shirts for Autumn

The 10 Biggest Ultras Groups in the World

Nicaragua introduces legislation to clamp down on foreign, national media

Yes, It’s Ungrateful to Turn Your Back on the National Anthem

3 Software Company Strategies That Are Vital for Businesses in 2021