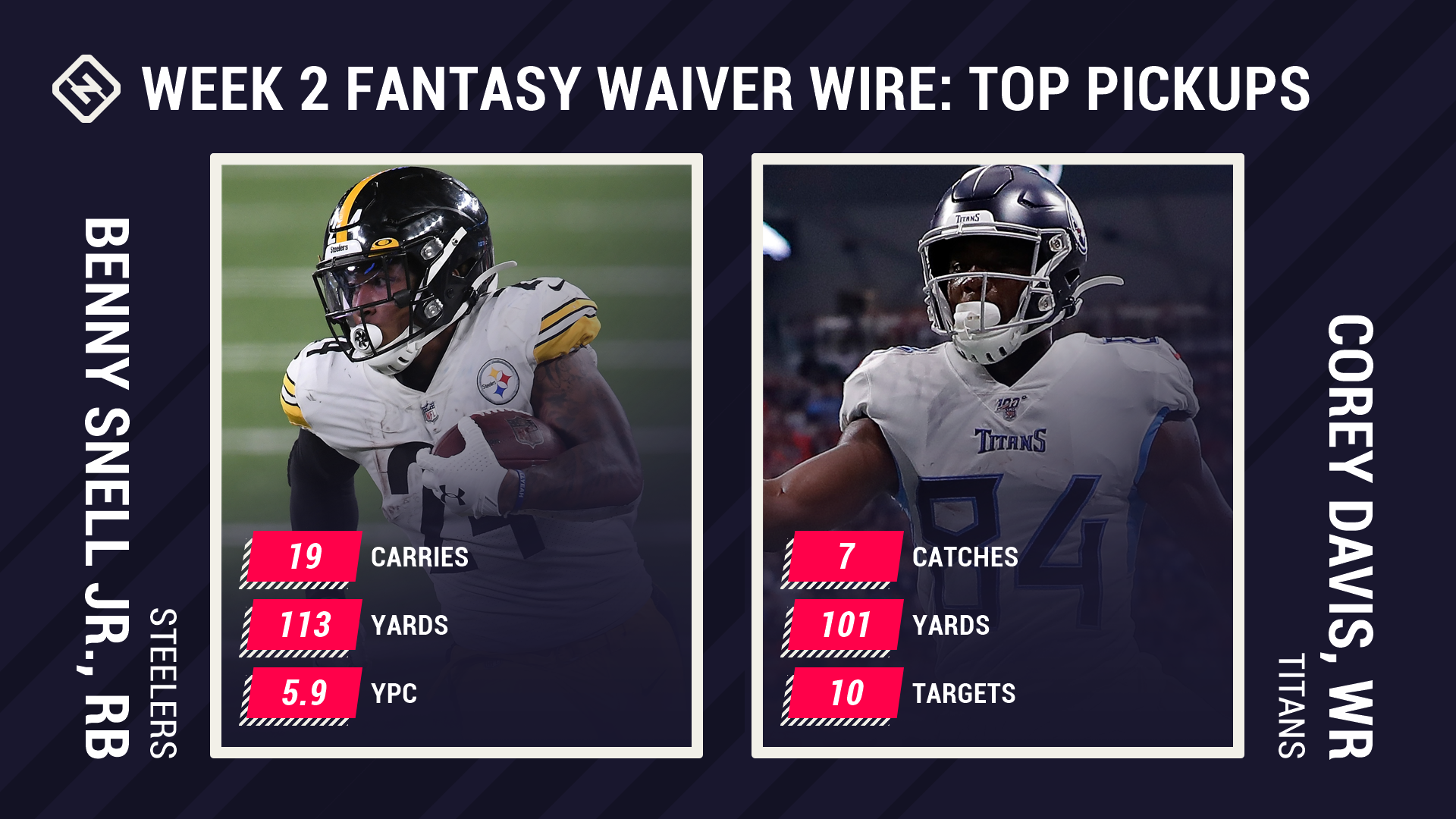 It was looking like a lackluster opening week of waivers through the Sunday afternoon games, but the three prime-time contests provided us with some big injuries (James Conner, Phillip Lindsay) and even bigger breakouts (Malcolm Brown, Benny Snell Jr., Corey Davis). Suddenly, the list of top Week 2 fantasy waiver wire pickups isn’t looking so thin, and you can bet there will be plenty of claims put in and free agents added after waivers clear around 4-5 a.m. ET on Wednesday morning in Yahoo and ESPN leagues.

Our full free agent list is loaded with names at every position, from exciting rookies (Laviska Shenault Jr., Joshua Kelley) to underowned veterans (Adrian Peterson, Sammy Watkins). It’s likely some have already peaked, but if you suffered any injuries or are already looking for help, we have potential reinforcements. Some, like Dallas Goedert, Nyheim Hines, and Scotty Miller, have real staying power. We even have some potential D/ST streams at the end of of the list, and if you’re a Stephen Gostkowski owner looking for a new kicker, you can consult our Week 2 kicker rankings. (We’re writing this as the Titans-Broncos game is concluding, and we’re assuming he’s already been cut.)

It’s tough to say if any of the players listed above are worth using a high waiver claim on. Brown could continue to be the Rams lead back, and Snell would definitely merit a top claim if Conner is set to miss significant time. Neither is a sure thing for season-long success, but 15-touch-per-game RBs always have value, so continue to monitor the injury reports and make an honest assessment of what your team needs. There might not be a “serious” injury or obvious breakout candidate for a few weeks, and by that time, you might have already moved back up the waiver pecking order.

Unless otherwise noted, only players owned in fewer than 50 percent of Yahoo leagues considered.

Benny Snell Jr., RB, Steelers. Snell ran well in relief of an ineffective James Conner in the first half against the Giants on Monday, but he really took off in the second half while Conner was on the sideline nursing an ankle injury. The second-year back out of Kentucky finished with 113 yards on 19 carries, marking the third time he’s gone over 90 yards in a game. Snell showed he could handle lead-back duties last year, getting at least 16 carries in five games, and if Conner is out for an extended period, Snell can expect a similar workload. Pending Conner’s prognosis, Snell figures to be a top pickup this week.

Corey Davis, WR, Titans. Fantasy owners were excited about A.J. Brown heading into this season, but it was Davis who looked like Tennessee’s top receiver in Week 1. The former No. 5-overall pick caught seven-of-10 targets for 101 yards, including a highlight-reel catch on the sidelines. Davis has teased fantasy owners before with good games before, so we’re not completely buying into him as an every-week fantasy starter just yet, but with a competent QB and home-run ability, Davis could be worth using in favorable matchups.

Royce Freeman, RB, Broncos. With Phillip Lindsay suffering a foot injury on Monday night, Freeman took over as Denver’s No. 2 back. He operated in that role last season, totaling 175 touches, 752 total yards, and four TDs. Surprisingly, he was used often in the receiving game, catching 43 of 50 targets. Sure enough, his first touch on Monday night was a 10-yard reception down to inside the one-yard line. It’s unclear if Lindsay will miss more time, but if he does, Freeman is worth a speculative add, at least in PPR leagues and deep standard leagues.

Tre’Quan Smith, WR, Saints. Smith caught his lone target for just four yards in Week 1, but with Michael Thomas suffering a reported high-ankle sprain, it’s possible Smith steps into a bigger role over the next couple weeks. Thomas believes he can play through the injury, but if he’s forced to miss time, Smith should usee six-plus targets per game as New Orleans biggest wideout and primary deep threat, and that could pay off given New Orleans’ favorable upcoming schedule (@ LV, vs. GB, @ DET).

Frank Gore, RB, Jets. The fantasy football season hasn’t officially begun until Frank Gore winds up in a waivers article, right? The ageless wonder looks to be in line for starter’s reps for at least a game or two, as Le’Veon Bell is expected to miss a “couple weeks” due to a hamstring injury. Gore managed 24 yards on six carries in New York’s opener, and he won’t have an easy time in Week 2 against San Francisco. The Jets then face Indianapolis — a game in which Gore could be viable flex if he’s still getting a significant workload. Josh Adams and rookie La’Mical Perine (if healthy) could also be in the mix for touches, but Gore will likely get the bulk of the carries and goal-line action, which makes him worth an add in standard leagues.

TikTok, WeChat and the growing digital divide between the U.S. and China

COVID-19 vaccines: The new technology that made them possible

Talking Point: Is Nintendo Making As Many Games As It Used To?

Astronomers Discover One of the Coolest Transiting Gas Giants

Composing the self-generating soundtrack for Creaks

The US Army Is Experimenting With AR Goggles For Military Dogs

Why I am reluctant to endorse preschool