Americans are leaving their homes more and easing up on social distancing, following the Centers for Disease Control and Prevention (CDC) relaxing guidelines for vaccinated Americans.

A new Gallup poll found that more ore people are visiting stores and restaurants than at any time since spring 2020.

Still, the vast majority of Americans report still wearing masks outside their homes, and significant minorities are still avoiding crowds and public spaces.

The poll shows the country is inching ‘back to normal’ in the wake of vaccinations and relaxed CDC guidance, while some Americans remain cautious.

Fewer Americans are staying isolated than ever before, according to a May Gallup poll

On May 13, the Centers for Disease Control and Prevention (CDC) made a major announcement: vaccinated Americans could safely go out in public without a mask.

In announcing the change, CDC Director Dr Rochelle Walensky explained that the vaccines in use in the U.S. are highly effective – including against variants – and protect against coronavirus transmission.

This means that, not only does vaccination protect you from getting sick yourself, it also means that you are unlikely to give COVID to someone else.

Thanks to this protection, the CDC said that fully vaccinated people should be able to go mask-less in any public space – at the grocery store, at the football stadium, and everywhere in between.

After the announcement, states from Kentucky to New York relaxed their own mask requirements and made other steps towards full reopening.

At the time, many Americans said they would continue to wear a mask in public, regardless of vaccination status.

But a new Gallup poll conducted one week after the CDC’s guidance changed shows that Americans are starting to get more comfortable with a reopened world.

The Gallup poll was conducted from May 18 to May 23, including a random sample of about 3,600 adults.

Only 22 percent of the adults included in the poll said they were completely or mostly isolating from people outside their household.

This is a far cry from spring 2020 – that April, 75 percent of adults were completely isolating. Just 3 percent were not making any attempt to isolate.

Americans are also returning to public spaces. The share of adults polled who say they’re avoiding places where people congregate was the lowest Gallup has recorded since March 2020. 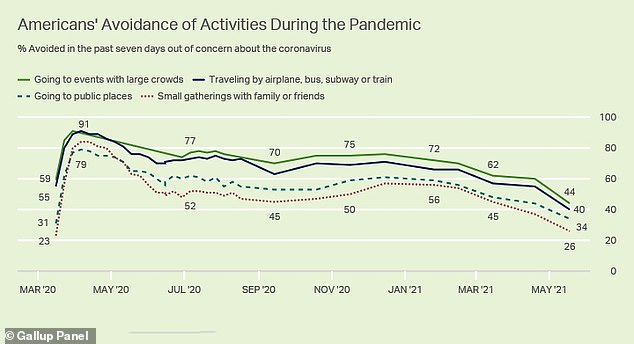 Events with large crowds, travel, and other activities that seemed taboo in spring 2020 are now becoming commonplace once again – but many remain cautious

Still, many Americans are still taking precautions. Gallup reports that 44 percent have avoided events with large crowds during the week they were polled.

About 40 percent avoided traveling by airplane or public transportation, while 34 percent avoided going to public places in general. Just over one-fourth of Americans (26 percent) still avoided small gatherings with family or friends.

These numbers are all way down from this winter, when the country’s biggest surge hit. In January, 72 percent reported they were avoiding large crowds.

Americans are also getting more comfortable visiting stores, restaurants, and other establishments. 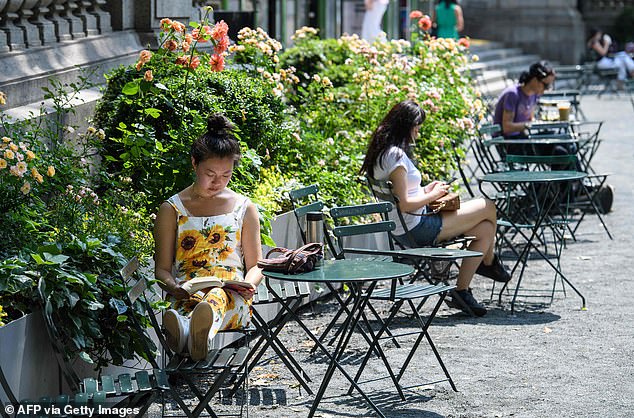 People are getting more comfortable going out in public, to restaurants and stores 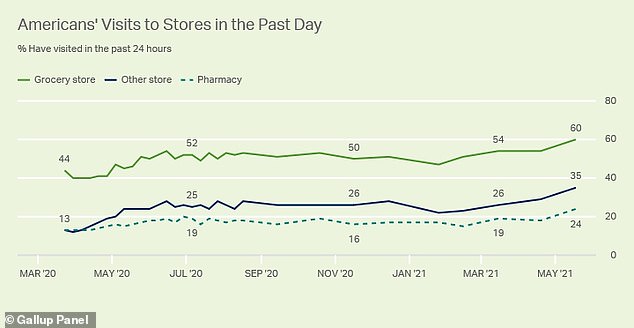 More people are going to grocery stores, pharmacies, and other stores 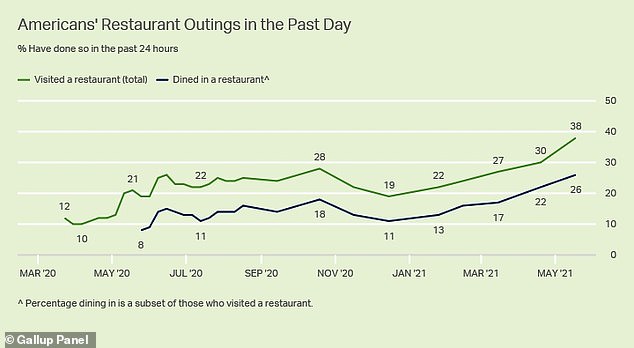 More Americans are visiting restaurants – both getting takeout and dining in

The number of respondents who had recently visited a restaurant increased even more sharply – from 30 percent in April to 38 percent in May. People were dining in, too – 26 percent reported dining in the past day, compared to 22 percent in April.

More Americans reported going to doctors, salons, and other service providers as well, though these areas saw lower use jumps compared to stores and restaurants. 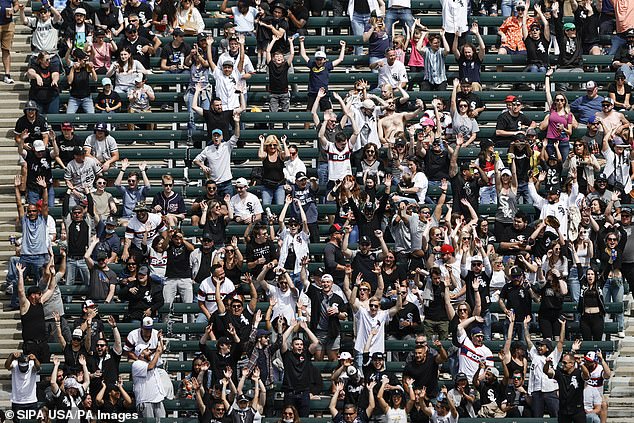 The CDC no longer requires face masks for fully vaccinated Americans, and people are starting to get comfortable with that option

The Gallup poll also saw a decrease in face mask use, likely inspired by the CDC’s guidance shift.

In the May survey, the poll found that 79 percent of respondents said they had worn a face mask in the past week – compared to 86 percent in April.

This still indicates that the vast majority of the country is using masks, though. And mask use is higher among vaccinated adults, indicating that those people who are more likely to get their COVID shot are also more likely to remain cautious afterwards.

Among those poll respondents who said they don’t plan to get vaccinated, only 49 percent said they’d worn a face mask in the past week.

Those unvaccinated Americans are the most likely to need a mask, experts say.

For this group, wearing a mask not only protects individuals from catching COVID – it also prevents the coronavirus from spreading to those Americans who currently cannot get vaccinated. This includes children under the age of 12 and those who are immunocompromised due to medical conditions.

Continued vaccinations and other public health measures will be important to ensure that this spring’s reopening – coupled with the highly contagious variant from India – do not lead to surges in future months.

A Warm Memory about State Farm’s Good Will

Outside the Box: 7 financial resolutions that can boost your wealth for a lifetime

WE Charity probe continues as co-founders, Craig and Marc Kielburger set to testify

Coronavirus cases suspiciously low in Syria, but new uptick is spurring the…

PRIVATE BLOG – The Dow Into the Political Storm

Why the Senate Should Not Rush an Impeachment Trial

The Success Story of Birthday Boy Govinda is Truly Inspirational

Fed: Fed poised to crawl onto ‘knife edge’ to rein in record largesse

NBA Draft lottery 2021, explained: Updated odds for every team to win the No. 1 overall pick

What You Need to Know About Live Events in 2021

USA fact of the day

How much income tax will Biden and Harris pay under their proposed hikes? These accountants say theyve found an answer

DOWN UNDER & the Great Reset

US cases fall to their lowest level since start of pandemic…

Influenza and other seasonal virus cases fell from 4,800 per…