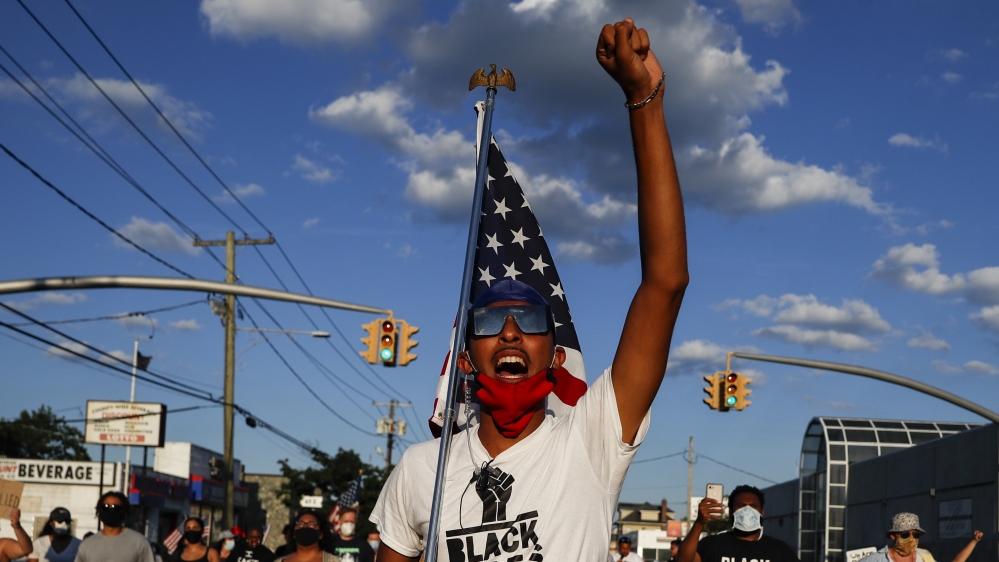 Capitalism and race. However you slice it, the coronavirus pandemic has revealed their insidious umbilical relationship, especially in the United States, where the racialised nature of its spread and impact has made the routine brutality of American racism suddenly intolerable.

But the responses to the gross inequalities laid bare by the present crisis too often focus on a narrow issue – neoliberalism – rather than seek their deeper roots.

Whether it is academia or think-tanks, Haaretz or The Guardian, Noam Chomsky or Naomi Klein, or myriad progressive international NGOs – all have put the blame on neoliberalism, hoping that “coronavirus spells the end of the neoliberal order” and the “uniquely American virus that is neoliberalism”.

But the focus on the neoliberal present is literally misplaced, for the current system is merely the latest iteration of a 500-year-old matrix of forces that continues to shape the modern world today. Like an invasive plant, this system must be dealt with at the roots, not the newest leaves. And the roots of the present crisis lie deep in the unfolding of capitalism, in the morphology of the nation-state, and in the generative order of colonialism that has fertilised them both.

For centuries, violence has been a tool, but not always the preferred or even most efficient one, to ensure the productivity and profitability of the capitalist matrix. Equally crucial to its smooth functioning has been what French philosopher Michel Foucault famously described as its “biopolitics“, a “quintessentially modern political rationality” that organised and administered modern populations “to ensure, sustain, and multiply” human life.

The purpose of modern biopolitical order is to create citizens and slaves, workers and soldiers, mothers and sons, who are malleable enough to function efficiently in the ever-evolving capitalist system. Foucault believed modern biopolitics suffers from the “paradox” of a “racism that society … direct[s] against itself”.

In reality, “racial capitalism” is not a paradox; rather, it is the coding that explains why the modern ordering and administering of human life has always relied upon so much violence and death to function efficiently.

Cameroonian critical theorist Achille Mbembe first described the role of extreme violence in the functioning of larger biopolitical orders as “necropolitics” – not merely a state’s “right” to kill and to organise people to be killed (as opposed to live), but to expose them to extreme violence and death and reduce entire segments of populations to the barest and most precarious existence. All in order to preserve the established economic and political hierarchies of the capitalist system.

Bio- and necropolitics cannot exist without each other, but the specific (im-)balance between them depends on the particularities of racial capitalism and ethnonationalism in each country. Two dynamics have always ensured a far more central place for necropolitics in the capitalist system than most realise. The first is what Peruvian theorist Anibal Quijano termed the “coloniality of power“, which ensures that the same violent, racialised and necropolitical dynamics at the heart of colonial governance are adopted in both the metropoles and the “postcolonies” after formal decolonisation.

The second aggravating factor in the imbalance between bio- and necropolitics in most societies is the reality that modern states and governing structures have from the start shared the same DNA as large-scale criminal enterprises or “rackets” – whose power comes from extorting money, resources and loyalty from communities in return for protection from internal and external threats (which, more often than not, they created or exacerbated).

The more wealth and power are concentrated in a society, the more racial and other exclusivist discourses will be deployed and the more criminal its government system, and ultimately the society, will become.

As German philosopher Max Horkheimer first diagnosed it, the inherently criminal dynamics of modern governance in a capitalist system rest on a relationship of dependency between ruler and ruled, in which those in power both “[protect] and at the same time [exploit] their clients”.

This is why authoritarian governments are often described as “mafia states”. As important, when combined with the other repressive function of the state, to wage war, what American sociologist Charles Tilly termed “war-making and state-making” become simultaneously the highest form of organised crime and the purest form of governance.

From ‘cuddly’ capitalism to necrocapitalism

After the intensely necropolitical era of European “high” imperialism, American expansionism and two world wars, the pendulum swung towards a more pronounced – and productive – period of biopolitics in the era of decolonisation, which accompanied the unprecedented rise in and distribution of material prosperity in the West and produced a type of governance economists (often derisively) refer to as “cuddly capitalism“.

This dynamic was not to last, however. By the 1970s technological advances, the reawakening of “free market” orthodoxy, and the rise of (neo-)conservative political and cultural ideologies, produced the neoliberal order now blamed for the much of the world’s ills.

In the Global South, such policies were experienced from the start as a form of neocolonialism. But given the coloniality of power at the heart of neoliberalism, it is not surprising that even in advanced capitalist societies neoliberal economic policies produced macroeconomic growth concentrated among increasingly narrow segments of society, while corruption, inequality, and criminalised poverty grew significantly, exacerbated by intensified structural racism that undid much of the gains of the previous era.

By the turn of this century, a new kind of necropolitics emerged out of this dynamic, what I term “necroliberalism”: A necropolitics justified by neoliberal market orthodoxies, the “war on terror”, and increasingly direct appeals to racially, ethnically, culturally and religiously “pure” identities. Necroliberal governance requires both the deeper institutionalisation of corruption in the political and financial systems and through it, even more wealth syphoned to what is colloquially termed the “1 percent”.

As the rise in inequality, poverty, societal pathologies (debt, disease, addiction) and environmental degradation led more liberal neoliberals to question the morality and even viability of the system, the loss of their support was compensated for by a sharp rightward ideological turn towards overt racial and cultural politics among white conservative Evangelicals – the traditional beneficiaries of American capitalism – who, not surprisingly, support the kin
d of political protection rackets that once again dominate conservative-led political systems.

Can a virus cure whiteness?

In this regard, it is hard to imagine a virus being more fortuitously designed to support hyper-racialised necrocapitalism than the novel coronavirus. With racial and economic disparities seemingly written into its genetic code, the global pandemic is not only leading to a restructuring of the world economy along more nationalist lines, but it is also accelerating trends towards automation that could displace and render permanently superfluous upwards of one third of US workers within a decade. While a disproportionate share of the 21st-century lumpenproletariat will be Black and brown, millions of white Americans will suffer as well.

Because of this, the coronavirus pandemic might ultimately mark an historical tipping point in racial capitalism a l’Americaine. Capitalism has always worked by dividing people, culturally and politically as much as economically, and giving a large enough segment of non-elites enough extra financial and psychological “wage” to warrant their continued support.

But today it is not just African Americans and other permanently marginalised groups who no longer have faith in the system; white America has lost faith as well. For a while, it seemed that President Trump could maintain the false consciousness of a system working for them by harshly demonising, excluding and repressing everyone else. But the perfect storm of a pandemic, economic and racial crisis has shown that neither the emperor nor capitalism have many, if any, clothes left.

The necrocapitalist mutation of capitalism is like a virus that has become too lethal to continue reproducing itself in the host community. The utterly “cutthroat” nature of capitalism today and the social, political, economic and environmental devastation it is producing, are quickly stripping away the ideological veneer of whiteness, giving more and more of its previously self-assumed beneficiaries their first glimpse of realities that no amount of racial privilege can keep at bay.

The further this vision spreads, the more Black lives will matter to everyone, and the greater the chance that a truly just and equitable America can finally be founded.

The boldest Mars missions in history

Angelina Jolie advocates to ensure ‘education for refugee children’ amid…

That was then, this is now

Parents of Michigan Shooter Flee After Being Charged with Involuntary Manslaughter