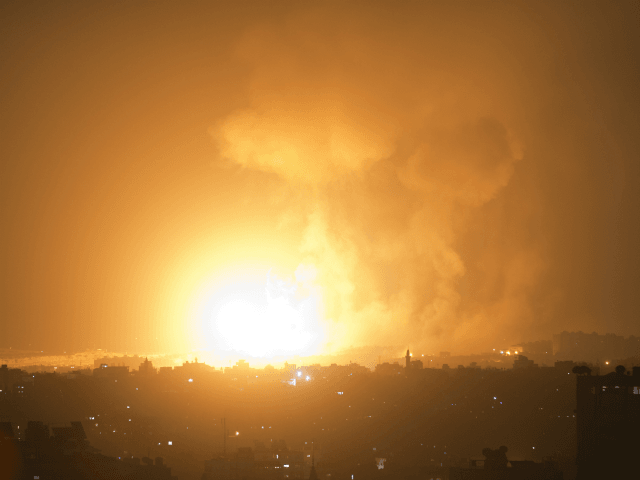 A volley of 13 rockets from Palestinian terrorists in the Gaza Strip were fired at southern Israel before dawn on Wednesday, in apparent response to Israel signing peace deals with the United Arab Emirates and Bahrain at a White House ceremony earlier in the evening.

The Israeli Air Force retaliated by striking Hamas targets across Gaza, including a subterranean tunnel, a Hamas training base and rocket launching site and a weapons cache.

The rockets violated an unofficial ceasefire agreement struck two weeks ago, in which the Gaza-ruling Hamas and other local terror groups promised a month of quiet.

Eight of the projectiles were intercepted by the Iron Dome missile defense system, the military said.

Earlier in the evening, during the White House ceremony, two more rockets were fired into the Israeli towns of Ashdod and Ashkelon, injuring six people.

“Gaza terrorist cowards are desperately launching rockets at Jews because they know this new era of peace will isolate their paymasters in Tehran,” he wrote on Twitter. “Iran-backed terrorists are not going to stop peace for 1 sec[ond] as the children of Abraham come together to forge the path of real peace.”

Gaza terrorist cowards are desperately launching rockets at Jews because they know this new era of peace will isolate their paymasters in Tehran. Iran-backed terrorists are not going to stop peace for 1 sec as the children of Abraham come together to forge the path of real peace.

Hamas released a statement shortly after the rockets were fired, blasting the peace deals.

“The normalization agreements between Bahrain, the UAE, and the Zionist entity are not worth the paper they were written on,” a spokesperson for the terror group said. “Our people insists on continuing its struggle until it secures the return of all its rights.”

During his address at the ceremony, Netanyahu said the peace accords would “bring an end to the Israeli-Arab conflict once and for all.”

Defense Minister Benny Gantz said in response to the attack: “On this historic night of peace, we received a reminder from our enemies that we must always be strong and prepared to defend Israeli citizens on all fronts and at all times — and this we will do.”

An antiviral, found in some people’s cells, outwits an immune escape plan used…

Liv Tyler reveals she had Covid: ‘Being isolated in a room alone for 10 days is…

Diego Maradona’s Nurse First To Be Questioned Over His Death

The Navy’s Curtiss SB2C Helldiver Was Flawed, But It Sank Japanese Warships

Do You Buy That President Bidens Current Approval Rating Should Comfort Democrats?

Climate Change: Compared to What?