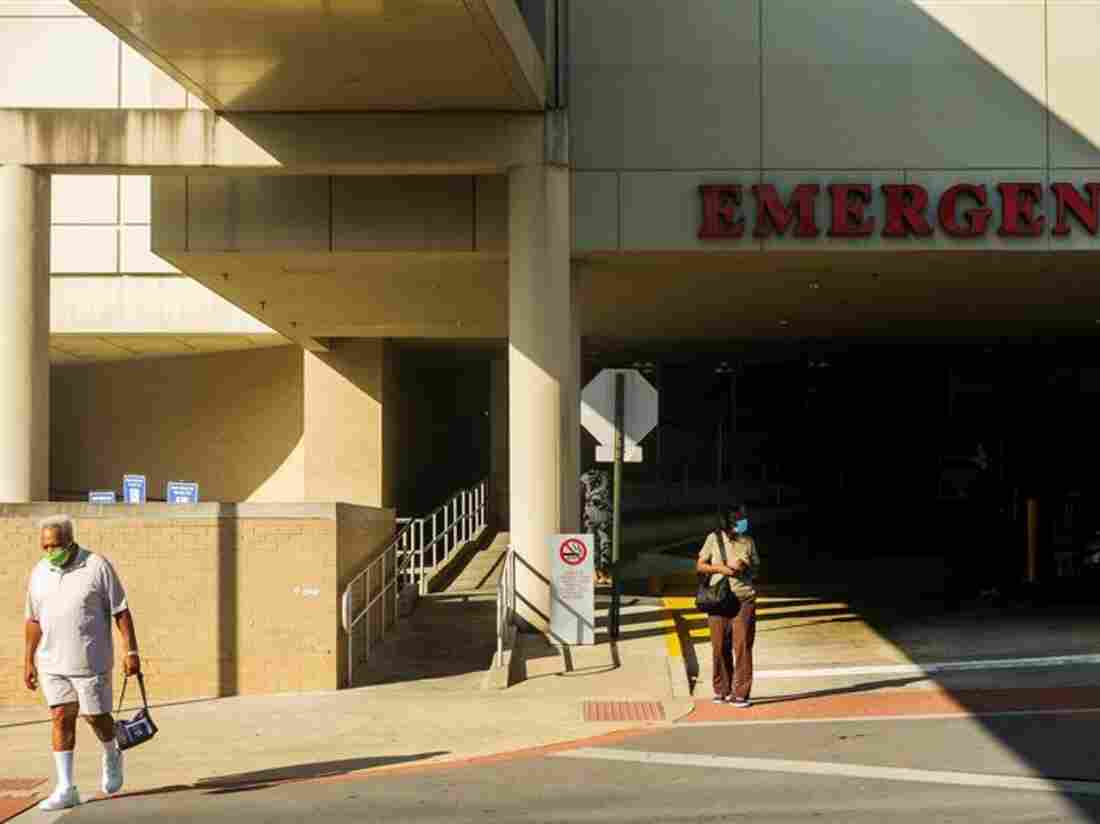 The emergency room overflowed with patients. Then, the next wave arrived. This time on stretchers.

“They were lined up along the walls in the ER,” a health care worker inside a Navicent Health-owned hospital in middle Georgia told GPB News. “We never have had an influx like that. Since the Fourth of July, it has just exploded.”

Staff did what they always do. They tended to patients as best they could. For the sickest patients, staff searched for available beds in nearby hospitals. In previous weeks, the health care worker said, COVID-19 patients typically got transported to medical centers about 70 miles north to Atlanta or 160 miles east to Savannah.

The distance stretched more than 850 miles north to south, from Louisville down to Orlando.

“When you have to start shipping patients out of state, it’s bad,” the worker said. “When the hospitals are full, that’s when it becomes really dangerous for everybody.”

The Navicent employee approached GPB News late Wednesday, saying hospital systems are not providing an accurate reflection of what staff are seeing inside the walls of medical centers overrun with patients. The employee spoke on condition of anonymity for fear of getting fired, and NPR is not identifying the Navicent hospital that employs them in order to maintain their anonymity.

“People will never understand if we do not tell the truth about how bad it really is,” the employee said. “That’s what makes us so angry.”

‘I’m Fighting It Every Day’

Tired of being stuck at home, Georgians headed to beaches and bars, to hair salons and restaurants. Many flaunted not wearing masks as if the virus was gone. For some, it served as their own personal way of telling the government to shove its restrictive policies.

Public health officials warned of opening too fast, too soon – that you can’t wish a virus away.

Georgia has seen coronavirus cases skyrocket as residents have gone about business as usual in recent weeks. Cases have topped 127,000, and more than 3,000 lives have been taken. Just three weeks ago, the overall cases stood at 69,000.

Even with cases spiking, Gov. Brian Kemp on Wednesday overruled local governments’ decisions to issue mask mandates. Atlanta, Athens, Savannah and several other municipalities recently enacted measures for residents to wear masks in public in an attempt to slow the spread of coronavirus.

Savannah Mayor Van Johnson shot back: “It is officially official. Governor Kemp does not give a damn about us.”

The recent surge has strained hospitals, and many are running out of intensive care beds, said State Rep. Chuck Hufstetler, the Republican lawmaker whose full-time job is as a doctor in Rome.

In a video session about health policy on Wednesday, he said his hospital this week took in a patient from 150 miles away in Macon. “We were the closest ICU bed open,” Hufstetler said. “Macon is a long way from Rome, so there’s a lot of ICUs filled up right now.”

That trend, he said, is not a good one.

“Some people don’t want to take it very seriously, and that’s been real disappointing to me,” said Hufstetler. “I’m fighting it every day here.”

Navicent Health is the largest health care system in middle Georgia with more than 50 facilities across the region, including its flagship hospital, The Medical Center, Navicent Health in Macon, a city of 150,000 about 70 miles south of Atlanta.

Navicent has come under fire for not being more transparent about the number of coronavirus patients within its care and how many ICU beds are available.

“I can tell you that it’s still very busy,” Dr. John Wood, the medical director for the emergency department at The Medical Center, Navicent Health, told WMAZ. “I know we have a lot of patients.”

The hospital group issued a separate written statement acknowledging its 637-bed trauma center in Macon is “currently at capacity, but we want to assure our community that this is not due to COVID patient care.”

“We have a plan in place when we reach capacity, and we do not want anyone to be alarmed,” Navicent said.

The health care worker who spoke to GPB News scoffed at such a statement.

“You’re kidding me, right,” the employee said. “We’re not supposed to be alarmed?”

The employee has worked for decades on the front lines of health care, beginning when HIV was the most frightening virus to treat.

Compared to the earlier peak in spring, the employee said, this “is 10 times worse.”

Some patients recently underwent operations at other hospitals, only to fall sick with coronavirus a couple days later, the employee said. Others vacationed only to bring the virus back home; some threw graduation parties leading to outbreaks, the medical worker said.

“The general public is being given the idea that this not a problem,” the worker said. “But it’s hitting everywhere.”

The fron
t-line worker wishes more hospital staff would speak up – that the public health emergency demands it of them.

“You’re looking at compassion burnout among employees who are struggling to try to keep these patients alive,” they said. “It’s exhausting.”

This story was originally published by GPB.

MSNBC’s Cross Rants Against Trump’s ‘BS’ on Police Killings: ‘Red Meat’ to His ‘Klan-Like Base’

Is there any point in Millie Mackintosh popping placenta…

The 15 minute lifesaver for men: It’s called a…