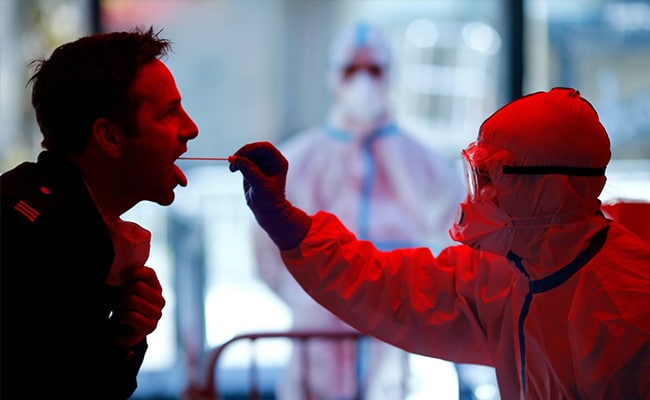 Germany coped relatively well with the first wave in the spring. (Representational)

German streets were quiet “like Sunday” on the first day of a new partial lockdown to try to halt surging infections, as the country reported a record number of Covid-19 deaths.

A total of 952 people died in the previous 24 hours, according to the Robert Koch Institute (RKI) disease control centre Wednesday, a figure that could rise as the hard-hit Saxony region was not included in Tuesday’s numbers.

The RKI said 27,728 new coronavirus cases were registered, a figure close to the daily record of nearly 30,000 infections reported on Friday.

Some 83 per cent of critical care beds in hospitals were occupied on Wednesday, the country’s intensive care and emergency medicine association (DIVI) said.

The new restrictions, including closures of schools and non-essential shops until at least January 10, demonstrate the seriousness of the situation in Europe’s largest economy.

Removing the festive lights that framed his mulled wine stand in the centre of Berlin, Tobias admitted he was resigned.

“Until last night, we were still welcoming customers but today it’s over — there’s no point in leaving up the decorations”, the 30-year-old told AFP.

“It feels like a Sunday” when shops across Germany are typically closed, said Ines Kumpl, a 57-year-old Berliner. “These measures are necessary but it’s stressful.”

Andrea, a pensioner accompanying her elderly father to the doctor, braced for a hard winter. These measures “are going to last longer than mid-January,” she said.

In Britain, London’s pubs, restaurants and hotels have been forced to close for the third time this year; Denmark has moved to a partial lockdown for the whole country; and in the Netherlands, a five-week lockdown came into effect on Tuesday.

Germany coped relatively well with the first wave in the spring but was unable to stop the spread of a resurgent virus in recent months with milder restrictions.

Authorities now want to “implement the principle of ‘we’re staying at home'”, according to the policy paper agreed by Chancellor Angela Merkel and 16 state premiers.

Social contacts will have to remain limited over the Christmas period from December 24 to 26, when meetings will only be possible between close family members.

New Year’s Eve festivities will also be curtailed, with the sale of fireworks and gatherings banned.

On Wednesday the Ifo think-tank, with an eye on scaled-back activity, downgraded its growth forecast for Germany in 2021 to 4.2 percent from 5.1 percent previously.

Ahead of the closure of most retail stores until next year, Germans rushed to queue up for last-chance Christmas shopping.

“I hope that the shopping on Monday and Tuesday will not penalise us,” said Angela Merkel at a meeting with her conservative parliamentary group.

“The curve (of infections) is very bad,” she said, participants told AFP.

“The vaccine will help us”, but the evolution of the pandemic remains unpredictable, she added.

Her government has pressured the European Medicines Agency (EMA) to approve the Pfizer-BioNTech vaccine ahead of Christmas.

“We will be able to return gradually to normal from the summer onwards,” Health Minister Jens Spahn told broadcaster RTL on Wednesday.

But the chairman of the World Medical Association, German doctor Frank Ulrich Montgomery, expected containment measures to continue at least until Easter.

“Even if vaccinations start earlier than expected, the effect will only be gradual,” he told the Funke media group.

BookWatch: Fighting racism at work means hiring employees with these qualities — and…

Medical workers in Colombia calling for a full lockdown

What Is Apple’s ProRAW Photo Format on iPhone?

Trump, Mike Pence “Had A Good Conversation” In Oval Office: US Official

Nolte: Jake Tapper Meddled In an Election and Lied About It

10 stretches to do every day

NFL coach rankings: Bill Belichick finally has a challenger at No. 1 heading into…

How to Schedule Voice Chats on Telegram