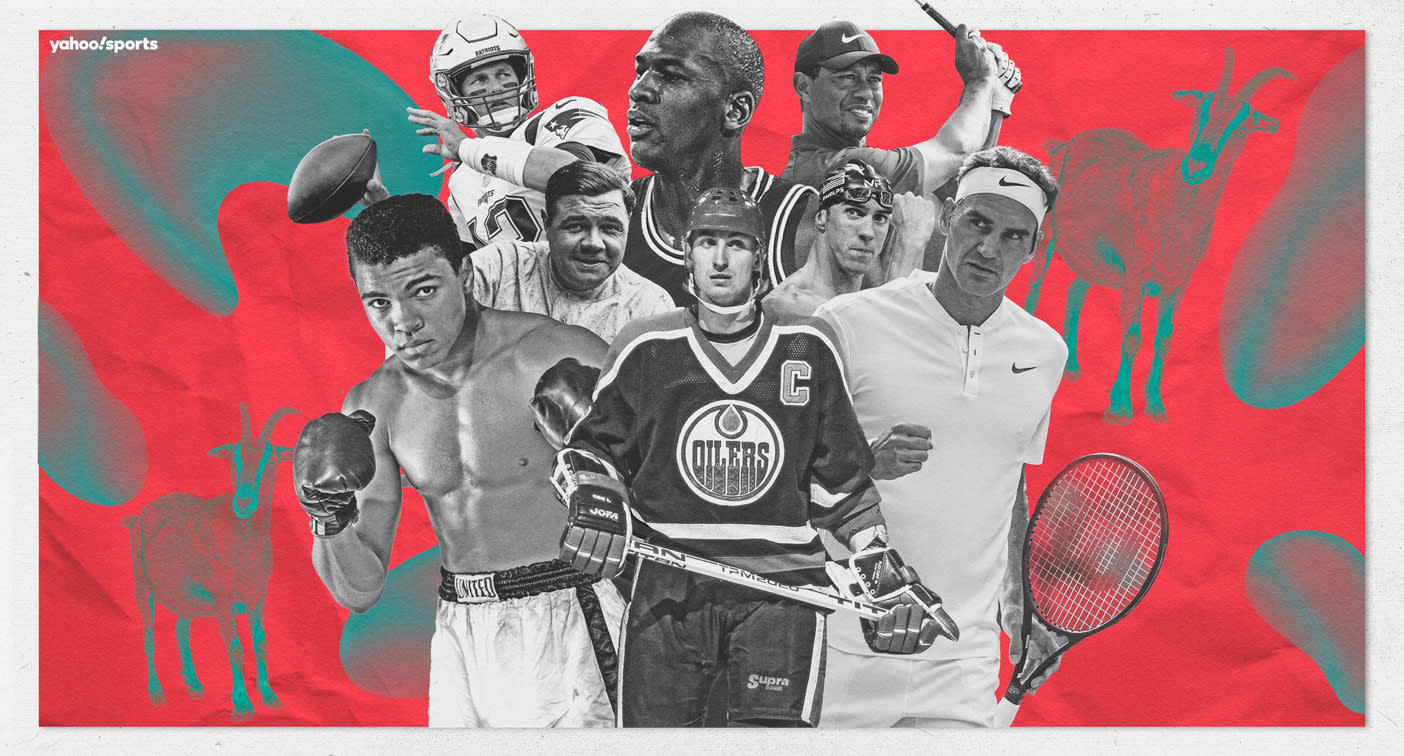 The “Great One” racked up 2,857 points in his 20-year career and would own the NHL’s all-time scoring record even if you took away his career goals (894) and counted only his assists (1,963). A nine-time MVP, Gretzky was so brilliant he cast a shadow on three men who would otherwise have great NHL GOAT cases: Gordie Howe, Bobby Orr and Mario Lemieux.

Michael Jordan was so good his claim to the NBA’s GOAT throne is still gaining momentum almost a quarter-century after his retirement from the Chicago Bulls. “The Last Dance” documentary reminded us how thoroughly he eviscerated the league. Jordan went 6-for-6 when a title was on the line, winning Finals MVP each time. He added five regular-season MVPs, three more scoring titles than anyone else in history and a Defensive Player of the Year award. No amount of honors or statistics can properly calculate how much fear Jordan’s blend of skill, athleticism and confidence struck into opponents’ hearts when the game mattered most.

As the MVPs, Pro Bowls, records and Super Bowl rings pile up, it becomes difficult to argue against anyone but Tom Brady as the greatest NFL player of all time. Perhaps there’s some distinction to be made between “greatest player” and “greatest résumé,” considering so much NFL success is based on being in the right situation (and Brady has been in an incredible one), but why belabor the point when Brady’s résumé blows anyone else’s away? He has more Super Bowl rings than any other player in NFL history. He won his first championship at age 24 and his latest at 41, and it’s unlikely that will ever be matched. He is one of five players with at least three MVP awards, and tied for the all-time record with 14 Pro Bowls. And he’s still adding to his legacy.

Roger Federer’s six-year run from 2004-09 remains unapproached in its dominance in the history of men’s tennis: World No. 1 for 237 straight weeks (second best is Jimmy Connors at 160); winner of 14 of 24 Grand Slams; finalist in six others; completion of the career Grand Slam. In one stretch, he reached the finals in 10 straight Grand Slam events and in 17 of 18. That stretch alone cements him in the conversation of the greatest ever. That he accumulated a record 20 Grand Slam titles playing in the same era as Rafael Nadal and Novak Djokovic, Nos. 2 and 3 on the Grand Slam list, only augments Federer’s résumé.

If we’re talking dominance — and we are — then Tiger Woods’ stretch from 1999-2002 is without comparison. He won five of six majors, including four in a row, and seven of 11. His 82 PGA Tour wins put him in a tie for first.

No matter which version of Muhammad Ali you pick — the fast, agile, almost-impossible-to-hit-boxer
of his youth or the wily, gritty tough guy who returned after more than a three-year exile from his sport — he has an argument as the greatest of all time in his sport. Ali won an Olympic gold medal, held the heavyweight title on three occasions, went 11-3 against opponents who wound up in the International Boxing Hall of Fame and became the biggest star the sport has ever known.

US Senate committee to vote on bill banning TikTok

tmc: TMC to expand political base across Northeast ahead of 2024 Lok Sabha polls:…

Is there any way to blame business cycles *on the media*?

T.I. Claps Back At Troll Who Thinks His Wife Tiny Needs An ‘Entanglement’…