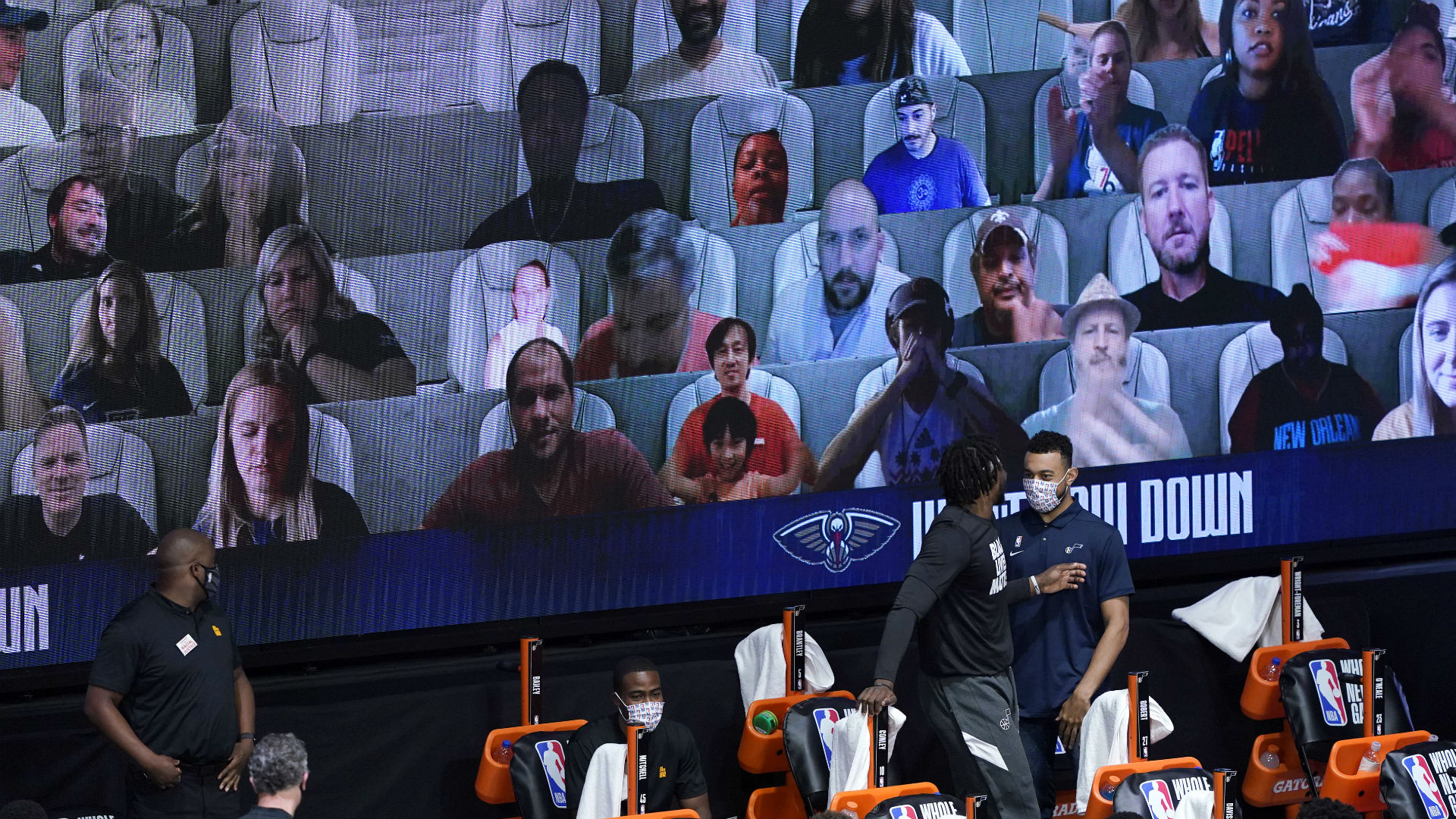 Having basketball fans attend NBA games amid the coronavirus (COVID-19) pandemic was never going to work. Allowing spectators to enter the league’s campus would defeat the entire purpose of constructing a “bubble” environment.

But the NBA has created an opportunity for fans to still score great seats as teams battle for playoff positioning.

During the NBA’s 2020 season restart, virtual fans will be featured around the court, including behind the benches of their favorite squads. The NBA is utilizing Microsoft Teams’ new “Together Mode” to put fans on 17-foot-tall LED screens.

Interested in snagging a virtual seat to the big game? You’ve come to the right place.

In order to be considered for a seat, fans can sign up through individual team sites. For example, the Pacers and Pelicans each have simple forms on their sites. Other teams, such as the Celtics, are reaching out to season ticket holders as well as the friends and families of players. The process for each team could change as the season progresses.

Another option: Michelob Ultra. (No, not drinking until you feel like you’re playing against LeBron James.) The official beer sponsor of the NBA is offering a chance to snag seats with its own sweepstakes and holding giveaways on its social media channels.

If you are chosen to be a virtual fan, then you will be provided a username and password via email to use on Microsoft Teams. You can then find the meeting invitation on your calendar and join the meeting to watch the game.

Step-by-step instructions for the virtual fan experience can be found here.

What is required in order to be a virtual fan?

All participants must have a computer or similar device capable of running Microsoft Teams. They will be expected to sign in at least 30 minutes before tipoff.

Fans must follow the rules stated in the NBA’s acknowledgement and authorization form, which include (but are not limited to):

Moderators will monitor fan sections and can remove spectators if necessary. Additionally, fans are expected to appear on the screen throughout the game, so if a fan disappears for an extended period, then that seat may be reassigned.

Have there been any famous virtual fan sightings?

Yes! Former Heat forward Chris Bosh showed up to watch the Lakers take on the Clippers.

And, after some technical difficulties, former Nets shooting guard Kerry Kittles found his seat for the Brooklyn-Orlando matchup.

Wait, is that Lil Wayne hanging out in the Lakers’ fan section?

You never know who will make an appearance in the virtual stands.

What’s behind the latest sackings in Saudi Arabia’s royal family?

This Former Banking Executive Wanted to Help a Friend Suffering From Lupus. Now He…

The Iconoclastic culture that is Dutch?

The batting greats that missed out on T20

Ukraine’s post-election message to White House: Leave us out of U.S. political feuds

Life in Gaza: The sounds of war on the most intense night of bombardments

They were destined to drown: How scientists found these seabirds a new island home |…

Eswatini makes Progress on NDCs thanks to Crucial Partnership Support