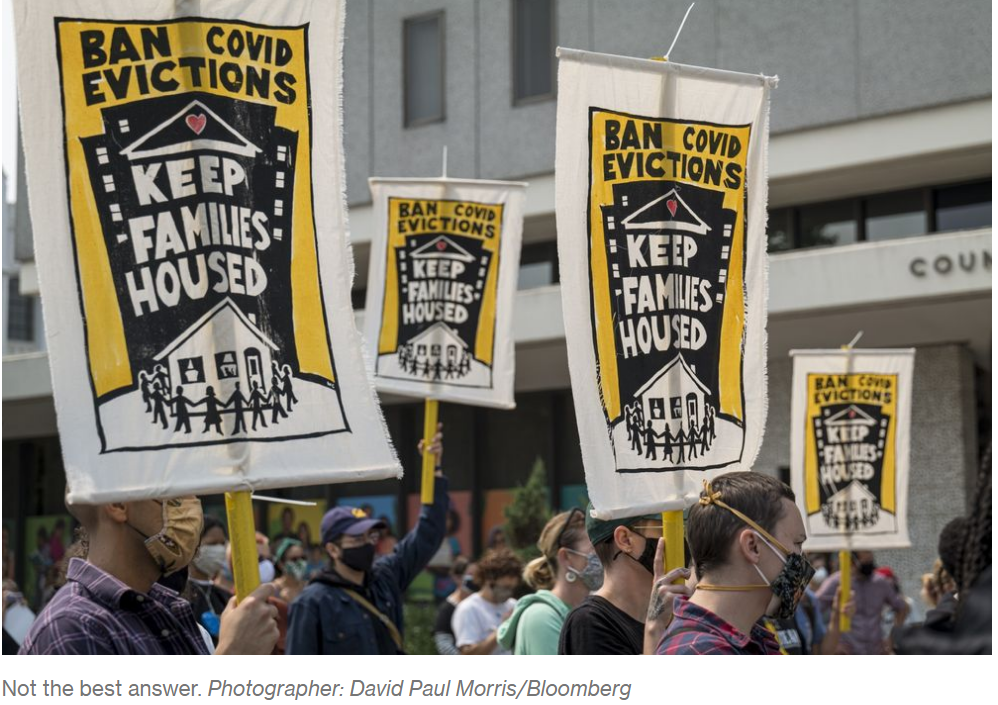 The Centers for Disease Control announced an Eviction Moratorium on September 2. It is an emergency action, which it claims it is entitled to make under the law.

Rent is Still Due

The obvious problem with the announcement is the rent is still due.

Eviction moratorium protect the renter but at the expense of the landlord.

What are landlords supposed to do, especially the small landlords who manage a few units to a dozen units?

What Happens in December?

The second problem is what happens in December? The rent was not cancelled and it is due with interest.

How is someone still out of work supposed to pay the bill in January? Meanwhile, the bank is about to foreclose on the landlord for the now seriously delinquent mortgages.

The third problem is the legality of his action. It offers no assistance to any landlords adversely impacted. There will be legal challenges.

Trump feels the pressure because Pandemic aid lapsed on July 25.

Nearly 7 weeks have passed at $ 600 each to individuals impacted by Covid.

That’s $ 4200 in missed income due to Congressional bickering. That money will never be made up so Trump concocted this scheme to paper it over temporarily.

A Bloomberg Editorial puts it mildly: Not the Best Answer.

Set aside for a moment the significant legal issues — such as how local courts will interpret the order, and whether it’s even within the statutory and constitutional authority of a federal executive agency focused on public health.

The right solution has long been clear: Congress should provide tenants with the support they need, by enacting an emergency expansion of federal rental assistance and allowing states the flexibility to distribute the money as quickly as possible. The cost would amount to between $ 12 billion and $ 16 billion a month, depending on whether enhanced unemployment benefits are extended alongside. That is a bargain in comparison with the $ 2.2 trillion price of the last coronavirus relief package.

If Trump really wants to prevent evictions, he should push Congress to act. As it stands, he has at best postponed the crisis until after the presidential election — at the expense of the nation’s future economic and social stability.

One Purpose of the Order

There is one and only one reason for such a fatally flawed proposal: Stop evictions until the election.

After the election, Trump will no longer give a damn.

I can only imagine the howls if Obama hatched such a scheme.

Instead, there has been nothing but silence from Trump supporters.

In a Siberian village, the lockdown is extreme. Trenches have sealed it off.

How to Use, Enable, and Disable Fall Detection on Apple Watch

India likely to approve AstraZeneca vaccine by next week: report

Could America Have Avoided the Iraq War by Killing Saddam Hussein?

The Mom Who Stole the Blueprints for the Atomic Bomb (The…

Check the Data: Its a Mans World (The Freakonomics Radio…

Is “wrestled” the right word here?