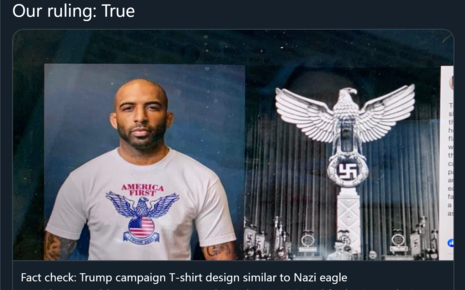 In a dubious “fact-check” put out over the weekend, USA Today falsely claimed that it was “true” that the Trump campaign was using a “Nazi symbol” (an eagle with wings out stretched holding a circular American flag) on a shirt being sold on their website. But after getting rightly ridiculed for their naked effort to associate President Trump with Nazism, while eagles were a common feature in American iconography, the paper tried to have it both ways by walking back the ruling to “inconclusive.”

“Update: The rating on this article has been changed to inconclusive. It was updated to reflect further reporting and analysis,” the paper stated in an update to the story’s Twitter thread, three days after their initial lies were posted. An editor’s note at the top of the article reiterated their change.

Beyond the fact that their “fact-check sources” more than doubled, the paper actually cited some of the facts that people on social media were mocking them for ignoring: symbols for the Marine Corps and the speaker of the House featured similar eagle and globe designs.

“The Mace of the Republic, a ceremonial symbol of the House of Representatives, is another high-profile example of eagle iconography in the U.S. government. In December 2019, Speaker Nancy Pelosi wore a brooch of the mace during debate over impeachment,” they noted. The paper even linked to an old USA Today article from last December where they gushed about the Speaker sporting the eagle-adorned brooch.

As for the Marine Corps, they recalled that the Eagle, Globe, and Anchor date back to the 1800s, predating Nazi Germany by many decades.

Update: The rating on this article has been changed to inconclusive. It was updated to reflect further reporting and analysis.

But despite admitting that the campaign shirt and the Nazi Imperial Eagle have “key differences,” USA Today argued that “Both birds hold another national symbol in their talons, wings outstretched, with the head facing to the right to the viewer, or the eagle’s left.”

In his original conclusion, “fact-checker” Will Peebles put aside the facts and contended:

[T]he eagle is a common symbol in American politics, and is included in the presidential seal of the U.S., as well as many federal departments. The claims that a Trump campaign T-shirt has come under criticism for using a symbol similar to a Nazi eagle is TRUE, based on our research.

But in the updated conclusion, Peebles took to mind-reading to try to prescribe a motive as to why the Trump campaign would put an American bald eagle on a shirt:

The U.S. government has many uses of eagle imagery in its official seals and emblems including on the “Great Seal of America,” on the presidential seal and on the mace of the U.S. House of Representatives. The Trump campaign’s T-shirt includes the use of an eagle that some claim bears resemblance to a Nazi eagle. We rate the claim that the Trump campaign is using Nazi imagery as INCONCLUSIVE, based on our research.

USA Today admitted their research proved that eagles were a common U.S. symbol, yet that was the conclusion they drew. As NewsBusters previously pointed out, the paper so desperately wanted to associate Trump with Nazism that they were willing to do anything.

The Best And Worst Face Masks For COVID-19, Ranked by Their Level of Protection

US allies once seemed cowed by China. Now they’re responding with rare…

Users wake up to #WhatsAppDown trend on Twitter, netizens have a field da

“I’m done with this club”, “Would be brilliant” – Some Spurs fans split on potential…