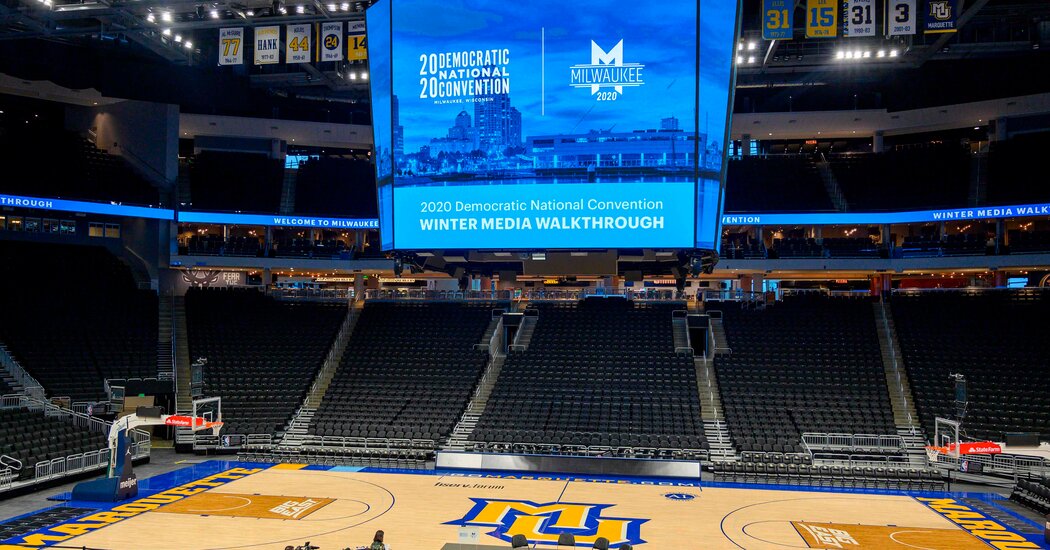 When Democrats awarded their 2020 convention to Milwaukee, plans called for a crowd of more than 50,000 delegates, journalists, party officials and V.I.P.s. But as the coronavirus spread this spring and the convention was pushed back to August, the number dwindled.

Now, one month before the party is set to gather at a convention site smaller than the one originally selected, officials are expecting the quadrennial event to include as few as 300 people — a number that includes not only attendees but members of the news media, security personnel, medical consultants and party workers.

Every aspect of the four-day Democratic National Convention, scheduled to begin Aug. 17, has been scaled back from the ambitions set when Milwaukee was named the host city in March 2019. A program of five to six hours of daily speeches, engineered to entertain delegates in the arena and draw heavy television coverage and headlines for Joseph R. Biden Jr. and his vice-presidential nominee, will be cut down closer to three hours each night. Much of the program is likely to be pretaped videos, according to people familiar with the planning.

On Thursday evening, convention planners sent an email directing all members of Congress and delegates to stay away from the convention, announcing that all party business meetings would be conducted virtually.

None of the Democratic presidential candidates who appeared on a primary debate stage this year have plans to travel to Milwaukee, according to aides, nor do former President Bill Clinton or Hillary Clinton, though all said they would do whatever the campaign and party requested.

As of this week, only Mr. Biden and Tom Perez, the Democratic National Committee chairman, are committed to come to Milwaukee, although party officials said the program was still being written. They’ve even given the event a new slogan to reflect the change: “Convention Across America.”

The event is “anchored” in Milwaukee but much remains uncertain, convention aides said, depending on the spread of the virus and the advice of public health officials. What is clear is that the convention is unlikely to resemble any in political history.

The image of Mr. Biden’s primary rivals standing behind him may take place in Zoom boxes on a screen, if it happens at all. The classic photo of the nominee, the running mate and their spouses embracing is certain to be forbidden by social distancing requirements, while schmoozing delegates who would have packed the raucous convention floor will instead be spread out across the country, watching video streams.

Any buddy comedy-like banter between former President Barack Obama and Mr. Biden, beloved by Democratic voters, will have to take place at a six-foot distance — or through the magic of television.

“Obviously this isn’t what we anticipated,” said Alex Lasry, who led Milwaukee’s convention bid in 2018 and whose family controls the downtown arena where the event was to take place. “On the bright side, we’ll have hosted the most unique and consequential convention in history.”

The best-case scenario, Democrats familiar with convention planning say now, is a polished program that’s a mix of live speeches, pretaped videos and small events held at satellite locations in battleground states and at landmarks across the country. Several officials mentioned this year’s National Football League draft, in which coaches, college stars and the league commissioner appeared live from their homes, as a model.

“We’re hoping for small things like, can we get the delegate credentials sent to us so people can have them as souvenirs,” said Jane Kleeb, the Nebraska Democratic Party chairwoman. “Can we get some of those signs so delegates can wave them at home?”

Democratic officials cautioned that virtually all aspects of the convention remained in flux. Convention planners are consulting regularly with public health officials in Milwaukee and with two epidemiologists brought on staff last month. Stephanie Cutter, a veteran of the 2004, 2008 and 2012 Democratic campaigns, is tasked with writing the program of speakers but is still weeks away from finalizing the schedule.

“I will appear if summoned,” said Stacey Abrams, the party star who narrowly lost the 2018 race for Georgia governor.

But Democrats familiar with convention planning say there is a serious likelihood that other high-wattage speakers — a group likely to include Mr. Obama and Michelle Obama, Mr. and Mrs. Clinton, former President Jimmy Carter and Senator Bernie Sanders of Vermont — will address delegates and the nation from satellite locations.

The limited nature of the program will eliminate some of the spontaneous moments that make conventions compelling political events with appearances that can make or break a candidacy — and a political career.

“There’s not going to be the balloons and all the yelling and cheering that goes on at a convention,” said Terry McAuliffe, a former Democratic National Committee chairman who oversaw the party’s 2000 and 2004 conventions.

Fewer speaking slots means fewer opportunities for up-and-coming politicians to get a breakout moment, as Mr. Obama did with his 2004 keynote speech in Boston. Socially distanced addresses make it harder to telegraph scenes of party unity. And television producers won’t have the usual scenes of local party chairs announcing their votes or delegates wearing state-appropriate clothing.

“Obviously when we are together in one space and physically together, it is empowering,” said Senator Kamala Harris of California, a top contender for the vice-presidential spot on Mr. Biden’s ticket, who attended her first Democratic convention in 2000. “But we’re going to have to find other ways to collectively empower and remind each other that we’re in it together.”

Ms. Harris, like other former presidential candidates contacted for this article, said she planned to do whatever the campaign asked, including appearing in person if needed.

“Not planning to go and to my knowledge no one’s been in touch with us about participating remotely or in person,” former Representative Beto O’Rourke of Texas wrote in an email.

Unique on the general election calendar, conventions are the only time when a party can choreograph a multiday event with broad viewership and expect a week of all-but-one-sided media coverage to follow. With the virus spreading, it’s unclear how the event will resonate with voters, even as viewership could be higher with people stuck in quarantine at home.

The typical goals of a national convention — fund-raising and motivating the party faithful — have been met long ago by antipathy toward President Trump. Mr. Biden’s standing has only increased as he has campaigned largely from his Delaware home, leading Democratic officials to wonder whether it’s not a bad thing for the convention to be less noticed than usual.

For committed Democratic volunteers, a ticket to the convention is both a reward and promissory note for continued engagement in the kind of grass-roots organizing that powers campaigns. Without that, the event becomes entirely for television, but lacking the drama that can make conventions compelling to watch.

“I don’t think you’ll see four days of continuous coverage,” said Jay Jacobs, the New York Democratic Party chairman. “I expect that everybody and their mother who likes to speak will not have the opportunity to get the coverage that they wanted.”

Democrats said the contrast between Mr. Trump’s event and their more modest — and in their view more responsible — showing will be energizing for their supporters and persuasive for undecided voters worried about their futures and the rapid spread of the deadly virus.

Their decision comes as Mr. Trump has made clear he wants the Republican convention to go on. Party officials moved it to Jacksonville, Fla., from Charlotte, N.C., because North Carolina state officials said they would have to abide by social distancing rules. Many top Republicans are skipping the event, flouting Mr. Trump’s desire for an elaborate gathering attended by large crowds.

On Thursday, the Republican National Committee announced new details about the convention, confirming a New York Times report this week that the party was planning to shift some events outdoors.

“What you will see is thousands of unmasked people gathered together to hear a speech versus the Democratic side where you have much smaller numbers taking all the precautions,” said Leah Daughtry, who headed up the Democratic conventions in 2016 and 2008. “Which side do you think better represents you and is concerned about your health?”

Democrats long ago began scaling back their plans, eventually moving the convention across downtown Milwaukee from Fiserv Forum, the city’s professional basketball arena, to the Wisconsin Center, a modest convention center that typically hosts events like the city’s car show. The last national political event to take place there was the 2004 Green Party convention.

Last week, the convention committee informed delegates that they would be issued ballots via email. Voting will take place over a two-week period in early August.

The City of Milwaukee has for now limited public gatherings to 250 people in one place. An ordinance requiring the wearing of masks in indoor and outdoor public places went into effect Thursday.

The extraordinary nature of the public health crisis combined with Mr. Biden’s widening lead over Mr. Trump in the polls has led top Democratic officials — usually a skittish bunch still stung by the 2016 election — to exude some confidence in their smaller convention.

State parties are trying to find ways to energize their volunteers and reward delegates, with plans in the works for drive-in events and outdoor parties with the convention feed projected onto large screens. Delegations are working together to replace the usual state party breakfasts with regional Zoom events that can draw higher-wattage speakers than small states would have been able to attract on their own.

“I think everybody is very cognizant that there are more important things to worry about than the nature of the convention,” said Gilberto Hinojosa, the Texas Democratic Party chairman. “We know who our nominee is and we recognize that it is too dangerous to get together. We’re not going to risk anybody’s life for a rah-rah convention that can be conducted virtually.”

Man Utd ace who made just 18 passes proves why Woodward must sign £105.3m-rated…

Trump’s unprecedented bribes to farmers may be impossible to claw back, experts…