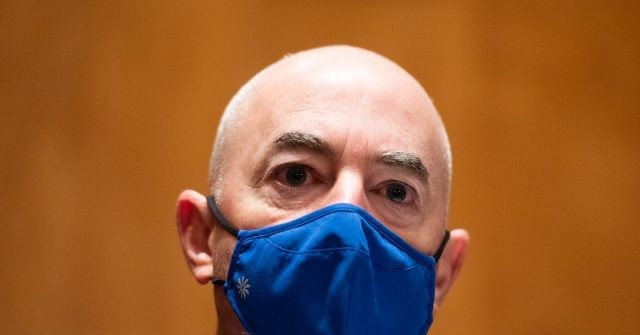 During his Senate confirmation hearing on Tuesday, President-elect Joe Biden’s nominee to lead the Department of Homeland Security (DHS), Alejandro Mayorkas, would not commit to not tearing down existing border wall built by President Trump’s administration.

Mayorkas, when questioned by Sen. James Lankford (R-OK), said he had not yet “looked at” the specific issue when asked whether he would take a sledgehammer to “physical barriers along our southern border.”

Citing the former Sen. John McCain (R-AZ), Mayorkas suggested that a wall across the entire United States-Mexico border was not necessary, to which Lankford agreed. Biden has vowed to stop all construction of border wall.

The exchange went as follows:

LANKFORD: Would you recommend any of the physical barriers along our southern border be dismantled or removed? [Emphasis added]

On the question of expanding the border wall, Mayorkas likewise said he would “look forward to studying that.” Trump helped build about 450 miles of new wall at the nearly 2,000-mile-long southern border, much of which is 18 to 30-feet bollard fencing that replaced dilapidated barriers from more than a decade ago.

Mayorkas also refused to commit to continuing Trump’s Title 42 order, which was implemented in May 2020 to drastically reduce illegal immigration to slow the spread of the Chinese coronavirus crisis. The order allows federal immigration officials to immediately return border crossers to their native countries.

The exchange went as follows:

MAYORKAS: … I look forward to studying Title 42 authorities and what they provide and I can say this, unequivocally, that our highest priority is to protect the health and well-being of the American public. [Emphasis added]

The Title 42 order, as well as Trump’s “Remain in Mexico” policy and the administration’s order to close the northern and southern borders to unessential travel are hugely popular with Americans across the board.

Exit polling from the November 3 presidential election found that 5-in-6 U.S. voters said they agree that “limiting cross-border traffic and restricting the admission of international travelers is important to help slow the spread” of the coronavirus. Only 13 percent of voters said they disagree that the policies do not help.

Even with the border controls in place, though many are expected to be ended by Biden, illegal immigration has started ticking up to its pre-virus levels.

As Breitbart News reported, border apprehensions at the southern border have jumped to the highest level for the first quarter of Fiscal Year 2021 since the year 2000.

Between October and December 2020, nearly 208,000 border crossers were apprehended at the border, the highest number since the Clinton administration. Officials have previously said that about half of all border crossers successfully illegally enter the U.S. undetected by Border Patrol.

39% of Canadians say coronavirus vaccine should be mandatory: poll

Cancer tumour microbiome may predict a person’s chances of survival

Will the world end if Rohr is sacked?

NextPit’s winners and losers of this wild week in tech

Salesforce’s $17B Pricing Lesson Every Startup Needs to Know