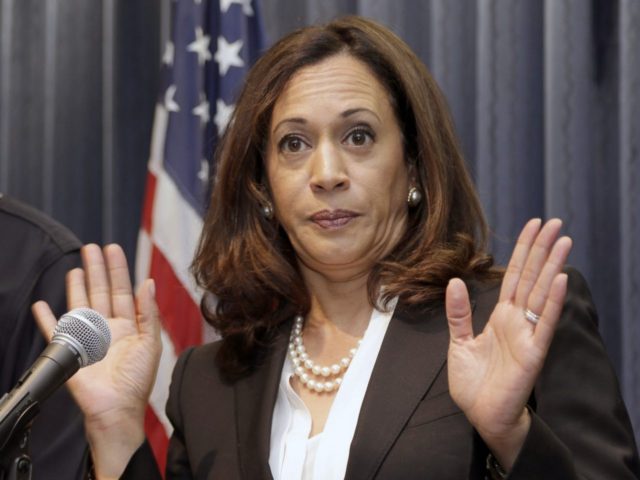 Sen. Kamala Harris (D-CA) promised in an interview Sunday evening that she would be more progressive on police reform if she is elected vice president.

Appearing on Desus & Mero on Sunday evening, Harris was asked, “When you get into office, what can we expect from you and Biden and are you going to be more progressive as far as what people are asking about the cops?”

She responded, “Yes, and I’m going to tell you why.” She went on to say she would hold the police more accountable:

So first of all, in a criminal justice system, there’s this phrase accountability and consequence that almost always comes up when people are talking about the person arrested, but never about the system itself and the people who work in the system. Biden and I are committed to saying everybody needs to be held accountable, even when they wear a uniform and wear a badge and carry a gun.

You won’t want to miss this. Be sure to tune in to @SHODesusAndMero today at 11pm ET. https://t.co/uPvOR6m70G

She added that she has been “out there marching with folks” — a reference to the Black Lives Matter protests that have taken place across the country.

“And you know, I’ve been out there marching with folks, and speaking the name of not only Mr. Floyd, but Breonna Taylor, Ahmaud, Jacob Blake, I met with his family, as did Joe Biden,” she said. “It’s got to stop. It has to stop.” She added:

Frankly one of the things that has made people more aware of it is because now we’re all carrying in our back pocket a video camera and a tape recorder. And so now the rest of the world is seeing what we have grown up knowing from the beginning. And I think that’s what’s giving fuel to the movement is that we don’t just have to tell people stuff that nobody else witnessed. Now the world is witnessing it in vivid detail. And the system’s get to be held accountable.

She also called for a nationwide standard on the use of force, including banning chokeholds nationwide, and said police are not held accountable.

Part of our plan is what we need to do around a number of things. One, having a national standard on use of force. Part of the problem with why police officers who break the rules and break the law aren’t held accountable in a court is because when a case gets to court, the question is, was that use of force reasonable? The problem with that is that you can reason away just about anything. What we’re saying is that the question should be was that use of force necessary, right?

When I was attorney general of California, I initiated pattern and practice investigations of law enforcement agencies that were accused of discrimination and misconduct and excessive force. That needs to happen at a national level, not only in terms of police departments, but I also say as a former prosecutor, of prosecutors’ offices. And so these are some of the things that we intend to put in place. But it’s also reform of the criminal justice system as a whole.

She also called for getting rid of jailing people for drug use:

There needs to be accountability for police to your point, but we also need to do things, which is what Joe and I will do, to decriminalize marijuana, expunge people’s records who have been convicted of marijuana offenses. All of the things we need to do — getting rid of mandatory minimums, what we need to do around saying that people should not go to jail for drug use and banning that. These are the things we’re talking about, because it has to be about systemic reform.

Doug and I are keeping the two Los Angeles County Sheriff’s deputies in our hearts as they currently fight for their lives after a horrific attack last night. The perpetrator must be brought to justice. https://t.co/ckuRllMtzv

Mets agree to sell to Steve Cohen; MLB owners’ approval all that remains

*Where is my flying car?: A memoir of future past*, by J. Storrs Hall

Enjoy the harvest season with this playlist

Donald Shoup on the Economics of Parking

The Fall of the Bin Ladens

WhatsApp faces legal challenge over privacy in its biggest market

Android Auto 6.0 is coming — here’s what to expect