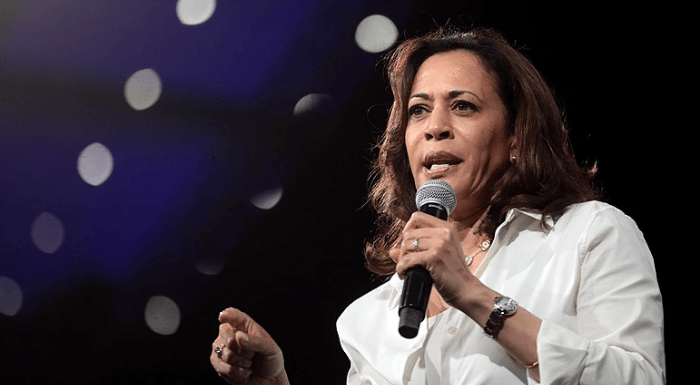 In an interview on Sunday, 2020 Democratic Vice Presidential candidate, Sen. Kamala Harris, said that under a Joe Biden administration, she would be “more progressive” on police reform.

Harris was asked on Showtime’s Desus & Mero program, “When you get into office, what can we expect from you and Biden and are you going to be more progressive as far as what people are asking about the cops?”

She replied, “Yes, and I’m going to tell you why.”

You won’t want to miss this. Be sure to tune in to @SHODesusAndMero today at 11pm ET. https://t.co/uPvOR6m70G

Harris: ‘Biden And I Are Committed…’

Harris vowed that law enforcement would be held more accountable,

“So first of all, in a criminal justice system, there’s this phrase accountability and consequence that almost always comes up when people are talking about the person arrested, but never about the system itself and the people who work in the system,” Harris said.

“Biden and I are committed to saying everybody needs to be held accountable, even when they wear a uniform and wear a badge and carry a gun,” she continued.

Harris claimed that she has been “out there marching” with Black Lives Matter protesters.

“And you know, I’ve been out there marching with folks, and speaking the name of not only Mr. Floyd, but Breonna Taylor, Ahmaud, Jacob Blake, I met with his family, as did Joe Biden,” she said. “It’s got to stop. It has to stop.”

Harris then explained why she believes that these protests are unlike anything we have ever witnessed.

“Frankly one of the things that has made people more aware of it is because now we’re all carrying in our back pocket a video camera and a tape recorder,” Harris said. “And so now the rest of the world is seeing what we have grown up knowing from the beginning.”

Doug and I are keeping the two Los Angeles County Sheriff’s deputies in our hearts as they currently fight for their lives after a horrific attack last night. The perpetrator must be brought to justice. https://t.co/ckuRllMtzv

“And I think that’s what’s giving fuel to the movement is that we don’t just have to tell people stuff that nobody else witnessed,” she added. “Now the world is witnessing it in vivid detail. And the system’s get to be held accountable.”

Harris then said a Biden administration would seek nationwide standards on the use of force, including banning chokeholds.

“Part of our plan is what we need to do around a number of things,” Harris said. “One, having a national standard on use of force. Part of the problem with why police officers who break the rules and break the law aren’t held accountable in a court is because when a case gets to court, the question is, was that use of force reasonable?”

The 1994 Crime Bill was sponsored by Sen. Joe Biden.
“Joe Biden is a part of the problem therefore I don’t understand how anyone could be thinking he could fix the injustices when he was the one who created them.”https://t.co/zfZ9zKddPh

“The problem with that is that you can reason away just about anything,” she went on. “What we’re saying is that the question should be was that use of force necessary, right?”

“Why? Because in many jurisdictions, when they commit misconduct, the case doesn’t go to a court, but it goes to an administrative hearing where they’re fired, right?” Harris continued. “And then they can move to a new jurisdiction or a new state where their record doesn’t follow them.”

Let’s talk about it [email protected] let’s put your record up against @realdonaldtrump Will [email protected] go back to letting Innocent men die on death row? CA is flipping red because she’s running 🤣 We haven’t talked about the money from slavery that she was privilege with. pic.twitter.com/ZkXan7e2P1

Harris and Biden have had heat from progressives within their party for having records that haven’t been kind to non-violent offenders. Both have espoused “law and order” more than criminal or police reform their entire careers, particularly Biden’s role in the 1994 Crime Bill.

Now that the tone of the Democratic Party has shifted dramatically in the opposite direction, Kamala Harris and Joe Biden appear to doing everything they can to assure their base that they have changed their ways.

Should either of them actually make it to the White House come January, everyone will see how much they really mean it – for good or ill.

In the meantime, let the record show that Donald Trump was the first president of the modern era to pass major criminal justice reform legislation with the passage of the historic First Step Act.

President @realDonaldTrump just accepted the 2019 Bipartisan Justice Award for his leadership in the passage of the historic First Step [email protected] was founded by 20 black Republicans and 20 black Democrats to elevate criminal justice reform above partisan politics. pic.twitter.com/dQtqZSftQO

A technique to sift out the universe’s first gravitational waves

The link between reading and becoming a good writer

Fourth Round Stimulus Checks Might Be ComingBut Not Soon

Wakeout! Named Apple’s Best App of 2020, While Zoom Earns the Title for Best…

The mirage of Trump’s ‘peace’ deals

The Dak dilemma: Will Cowboys do right by QB?

BARNEY CALMAN: My GP dad once saved a patient’s life by looking at his throat

Biden likely to remain tough on Chinese tech like Huawei, but with more help from…

Tucker Carlson: Maybe Gen. Milley Should Be Fired For…